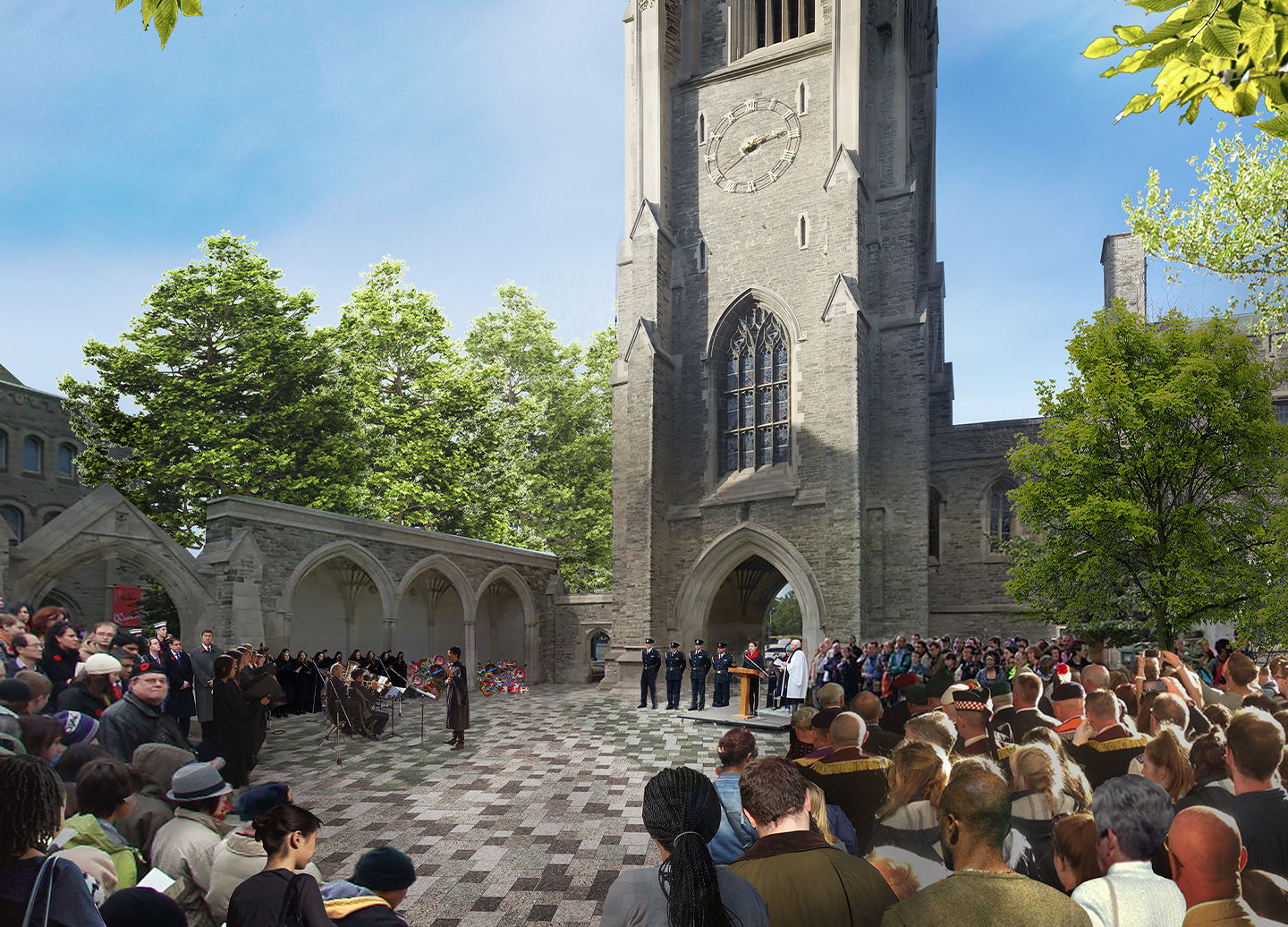 He was a philosophy and art student who made a career as a lawyer. He was a key member of his firm who suddenly retired on his 50th birthday to play competitive bridge and golf. Ronald G. Macdonald led a full life until his unexpected death in 2016—then left one more surprise: a generous legacy to the University he attended 50 years before.

“Ron was a very eccentric person, actually,” remembers his sister Sheila Thompson, who herself has two degrees from the University. “In the funny way, with a good sense of humour. He was one of the partners at his firm, and he went in 10 days before his birthday and announced that he was leaving at the age of 50. I guess they were quite startled!”

The unrestricted gift to U of T sparked only gratitude. The University of Toronto, in recognition of Macdonald’s bequest (which has been directed to the Landmark Project), is naming the new plaza to be built at the foot of the Soldiers’ Tower, next to Hart House, after Macdonald. The RG Macdonald Plaza will be built over the next three years as part of the project, the once-in-a-generation initiative to revitalize the University’s historic core landscape.

A lifelong connection to U of T, and a life filled with art

Both Macdonald’s parents had attended U of T before they met and married in Toronto. His father, George, was born in Scotland and served with the Seaforth Highlanders during the First World War. A decade later he came to the University, where he enjoyed boxing and soccer while earning three degrees in education. His mother, Doris (née Johnston), took modern languages at University College, then went on to a career as a librarian.

After Macdonald earned his BA in philosophy at Victoria College, he moved to France, where he studied art at the Sorbonne in Paris. Then back to U of T, where he earned a law degree, joining Tory Tory Deslauriers & Binnington after graduation and rising to partner.

“I’m sure he liked being a lawyer,” says Thompson. “But he had lots of other interests, so he didn’t want to do it past the age of 50.” Still, he made such a mark at Torys that more than 40 members of the firm attended his celebration of life, 25 years after he had left.

Those 25 years were filled with activity—competitive bridge, snooker with friends, hiking and three days a week on the golf course. He also supported U of T for many years, making gifts to Victoria College, the Faculty of Law and the Libraries. “Our whole family was very concerned with education, so I think that’s the reason,” says Thompson.

Above all, Macdonald had never lost his love of art—while at Tory’s, he had taken the initiative to grow the firm’s contemporary art collection, now renowned and showcased in spectacular offices, prompting Toronto Life to dub the firm one of “Toronto’s five coolest work spaces” in 2013. “And he had quite a large art collection of his own, mostly modern,” says Thompson, “and also became deeply involved with the Art Gallery of Ontario (AGO).” After he passed away, friends buried him with his AGO membership card, a deck of cards, a cue ball and a golf ball to represent his lifelong passions.

Macdonald left his bequest to the University’s greatest needs, a sign of trust that gives U of T the choice of where to allocate the funds. In light of Macdonald’s love of the outdoors, the University directed his gift to the priority Landmark Project, a spectacular revitalization of an iconic landscape. By increasing pedestrian pathways and moving parking underground, U of T’s Front Campus and the busy academic activity surrounding it—from Convocation Hall to the future location of the Temerty Faculty of Medicine’s new building—become more walkable and accessible. By adding more trees, gardens and inviting plazas, the area becomes greener, nurturing creativity, innovation and collaboration.

He grew Tory’s art collection, now so renowned the firm was dubbed one of Toronto’s five coolest work spaces

In June, leaders from U of T’s Indigenous community conducted a ceremony to acknowledge the impending changes to the land and then heavy equipment broke ground for the first piece of the three-year project: the installation of a massive underground geoexchange field that will reduce emissions by storing surplus heat generated by mechanical systems in the summer for use in the cold winter months.

With its goals of greening an iconic outdoor space, promoting walking, nurturing creativity and creating a beautiful oasis at the heart of a historic educational landscape, the project is a fitting match for Macdonald’s life, interests and generosity.