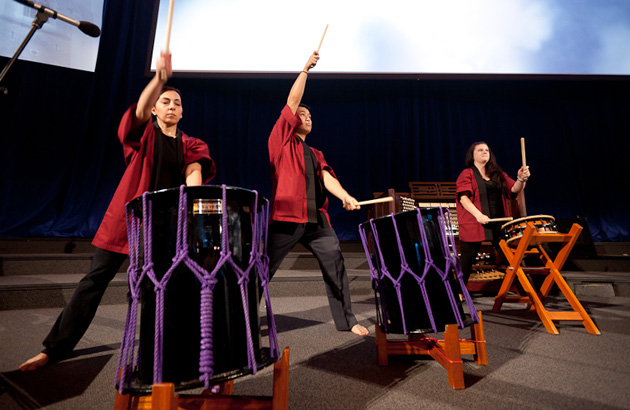 Nearly 1,000 alumni, friends, students, faculty and staff gathered in Convocation Hall on Sunday, November 20 for a special event marking the start of the public phase of the University’s comprehensive fundraising campaign—the University’s third in the last 30 years. 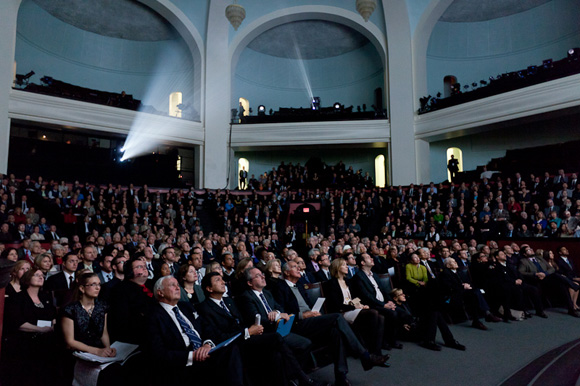 The event featured music composed and performed by students from the Faculty of Music, as well as videos highlighting the stories of students, faculty and alumni. The campaign’s leadership, theme and its $2-billion goal were also revealed, along with the announcement that $966 million has already been raised. President David Naylor, in his keynote address, spoke of the “confluence of talent, imagination, dedication and generosity” that has contributed to the University’s ascent to the top ranks of universities worldwide. 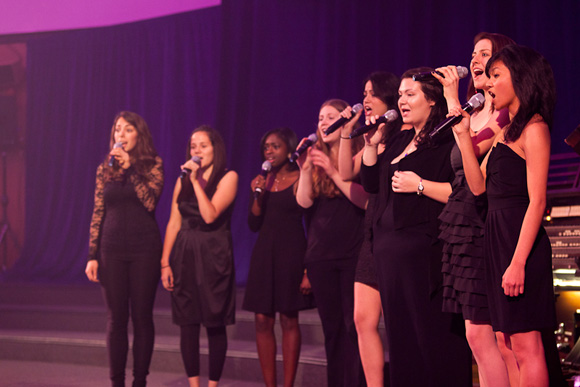 More than anything, the campaign launch celebrated the University’s community—both its tradition of leadership, past and present, and its potential to enhance that extraordinary legacy for future generations.

Convocation Hall was chosen as the setting for the exciting event because of its storied history. Built in 1907, thanks to the donations of alumni and friends of the University, “Con Hall” is where all students graduate from U of T, join our global family of alumni, and begin their journey towards careers, families and making their mark on the world. 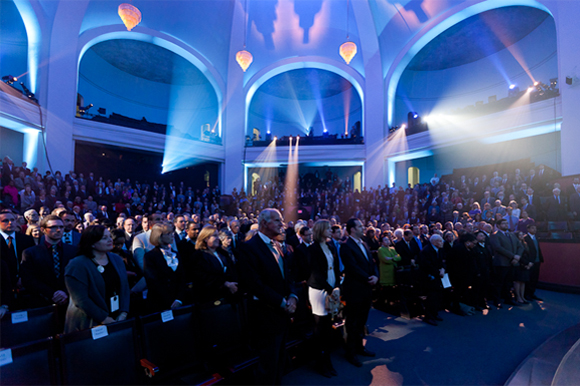 Student leaders and performers featured prominently in all parts of the program, including a one-hour concert prior to the formal program featuring a Latin jazz combo, taiko drumming, opera singers, and other ensembles. 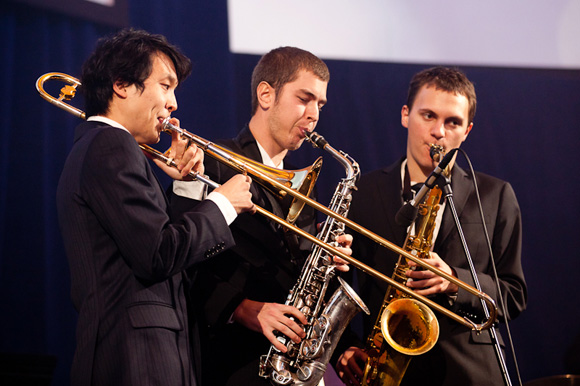 Following an impressive opening fanfare, composed specially for the occasion by recent Faculty of Music graduate Aaron Tsang, the program began with a short introduction by Aakash Sahney, an undergraduate in Electrical and Computer Engineering and Co-founder of MyVoice, James Janeiro, a Master’s student in Public Policy and Governance and Vice-chair of the Soldiers’ Tower Committee, and Marijana Josifovska, an undergraduate in Economics and Political Science (UTM) and Founder of Investors Beyond Borders. In a short video they explained how U of T has enriched their lives and those of other students, and prepared them for leadership in a borderless world. 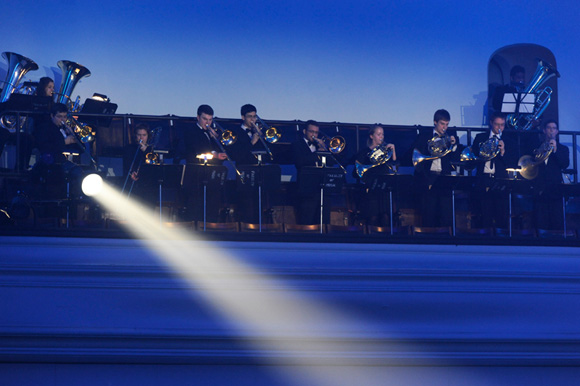 Chancellor David Peterson officially welcomed guests and spoke to the promise and potential of the University’s extraordinary student body, before introducing Prof. Naylor. The President’s keynote address focused on the tradition of excellence and the many contributions of the University’s worldwide community of alumni, faculty, staff, and students to every aspect of human society. Prof. Naylor described how the University is addressing pressing global challenges of health care, energy efficiency, the fight against poverty and the development of sustainable cities. 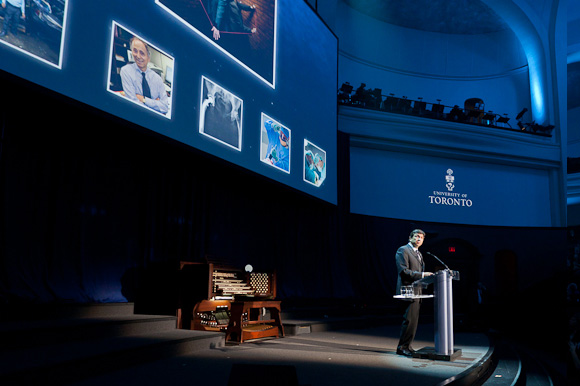 Boundless, the campaign theme, was introduced in a special video showcasing alumni, faculty and students, with a special score composed by Kevin Lau, a student in the Faculty of Music. Vice-President of Advancement David Palmer spoke to the choice of “boundless” as a theme, for what it says about the limitless potential of our students, for the impact of our faculty’s teaching and research mission, reaching across the boundaries of knowledge, disciplines, and nations, and for its sense of openness, optimism, and inclusiveness. Mr. Palmer also spoke to the broad impact of the donations received to date in lifting nearly every aspect of the institution. 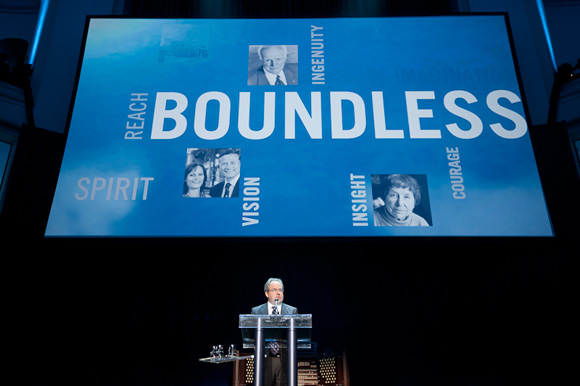 Chancellor David Peterson reflected on the generosity of alumni and donors and surprised and delighted the audience by conferring on all present the symbolic degree of Doctor of Boundless Opportunity, honoris causa. 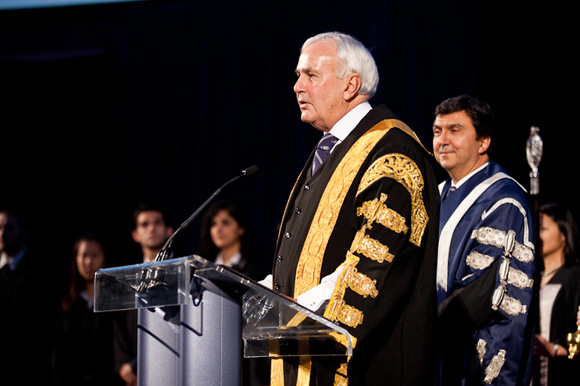 A large tent erected on King’s College Circle provided a reception space following the ceremony, necessary for its adjacency to Convocation Hall and for its capacity.1 The reception allowed student ambassadors, faculty, and staff to mingle with invited guests, alumni, and donors, and enjoy additional performances by students from the Faculty of Music. 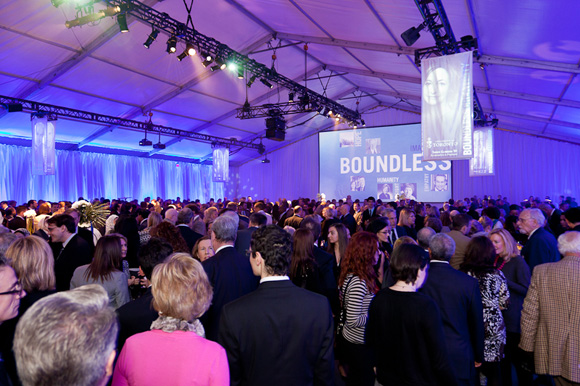 For further news on the launch and upcoming associated events, visit the campaign website homepage.

Impact of the Campaign Launch

Long term, the campaign public launch event is just one of several events planned to bring members of our worldwide community together in celebration of the University’s existing impact and future promise. Further events are planned for individual faculties, colleges, and campuses, for current students, and for major Canadian and international cities where the University has a strong presence.
For a fundraising effort of this magnitude to succeed, returning $2 billion to the University over the life of the campaign, we intend to be as inclusive as possible in reaching out to and engaging our alumni as advocates and ambassadors. There are none better than our own alumni to speak to the importance of the University’s vision and mission, from their own personal experiences.
Ultimately, the return on investment for these launch events is significant.2 They generate momentum for the campaign, instil pride and conviction among our constituents, convey the urgency and relevance of our priorities, and stimulate concrete gains in donations and alumni involvement.

More about the Campaign Launch

1In the future, once again with the generous support of benefactors and alumni, the Kimel Family Field House within the Goldring Centre for High Performance Sport will provide an alternate venue for gatherings of this size.

2The University has been widely recognized for its transparency and efficiency in managing costs associated with fundraising programs. Administrative costs for fundraising average 14 cents per dollar raised—a remarkable seven dollars returned for every dollar invested—well below Canada Revenue Agency thresholds of 35 cents per dollar, and below the range of 15 to 25 cents per dollar which is the norm for higher education.  Included in our overhead is a budget of approximately $1 million across the next 12 months for all the University-wide events that will be held in Canadian, US, and international locations, the largest share of which was allocated to our Toronto launch.  Campaign events represent a significant but important investment that will bring alumni together all over the world, build new relationships and, over the course of our Campaign, generate countless new philanthropic opportunities.