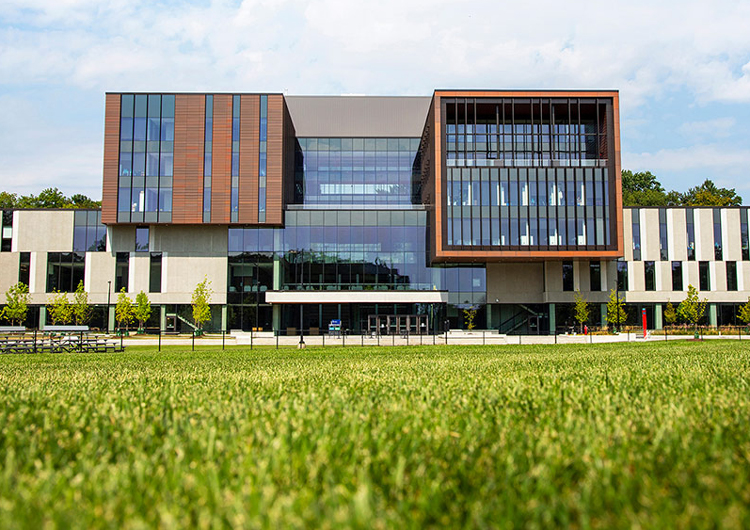 In 2016, William C. Buttimer left a generous bequest of $1,750,000 to U of Ts Mississauga campus, to be used for capital projects. The funds helped build the beautiful new academic centre which has just received a new name that looks to both past and future.

The University of Toronto Mississauga announced the official name in August 2019. The name is an Anishinaabemowin phrase that acknowledges both the Indigenous history of the land and the future of the campus.

The new building, erected in place of the original 1967 North Building, unofficially opened its doors in September 2018. While construction crews completed landscaping and interior finishes, a University committee reviewed name suggestions – more than 700 in total – for the new structure.

The collaborative naming process reflects a commitment to reconciliation

The University will celebrate the new name at an upcoming opening ceremony.

“On behalf of the entire U of T community, I would like to thank and congratulate all those involved in the naming of this key building on the UTM campus, including the Mississaugas of the Credit First Nation,” said President Meric Gertler. “It reflects our commitment to engagement with Indigenous communities as we work together to lead the process of reconciliation.”

“I am pleased and honoured that UTM’s newest academic building will be known as Maanjiwe nendamowinan, meaning ‘gathering of minds’ in Anishinaabemowin,” said U of T Mississauga Acting Vice-President & Principal Amrita Daniere. “It captures, so perfectly, the spirit and purpose of this building, and reflects the land on which the campus operates and U of T’s ongoing response to the federal Truth and Reconciliation Commission.”

“We gratefully acknowledge the support of the Mississaugas of the Credit First Nation for bestowing the name of Maanjiwe nendamowinan on this beautiful building,” she said.

“This is a major step forward on reconciliation with the Mississaugas of the Credit and UTM,” said MCFN Councillor Veronica King-Jamieson. “Through naming a building in Anishinaabemowin – Maanjiwe nendamowinan or ‘the gathering place for good minds to come together’ – this is what education is about.”

This is what education is about

“Our vision is to have an Indigenous hub at UTM that attracts Indigenous students as they seek higher education while enabling them to stay connected and grounded to their history and identity,” King-Jamieson said. “We are honoured that UTM created space for not only the Mississaugas of the Credit through this collaboration, but for all Indigenous Peoples.”

BROWSE ALL NEWS
U of T turned Dr. Gooden’s dream of helping others into a reality
MORE NEWS