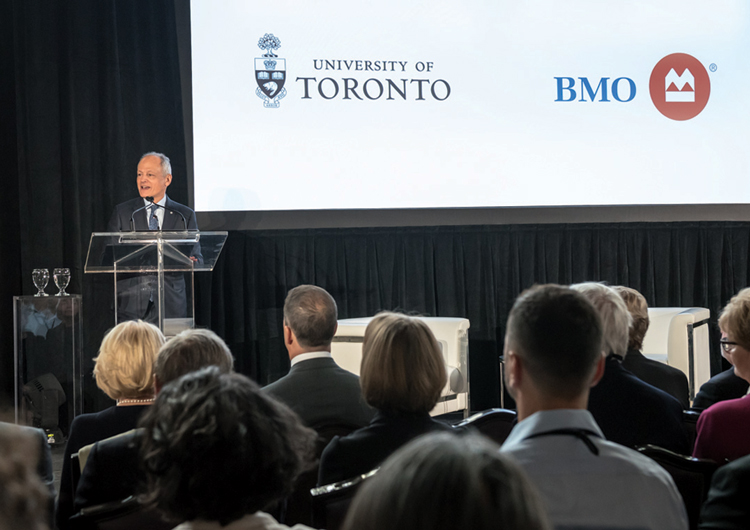 The Great Hall at Hart House was abuzz with excitement for the October 7 announcement of BMO Financial Group’s $5-million gift to the University of Toronto. The gift enabled U of T to establish the BMO Lab for Creative Research in the Arts, Performance, Emerging Technologies and AI—the first in the world of its kind.

To celebrate the gift, U of T President Meric Gertler and Chancellor Rose M. Patten hosted BMO Financial Group CEO Darryl White, members of the bank’s board and executive team, and Ross Romano, Ontario’s Minister of Colleges and Universities.

The celebration featured demonstrations that illustrated how the lab will combine theatre arts with advances in engineering and computer science. One demonstration used a machine-learning algorithm to convert live video of body movement into dramatic changes in an AI-generated human face. A second demonstration featured an actor performing lines from Shakespeare’s The Tempest, using a hidden sensor on his wrist to conjure thunder from the public address system and lightening from the stage lights.

The theatre demonstration adapted a student project developed at the Centre for Drama, Theatre & Performance Studies. The project was part of a 2018 graduate course co-taught by Professor Karan Singh from the Department of Computer Science; Professor Pia Kleber, the Helen and Paul Phelan Chair in Drama; and David Rokeby, an internationally respected installation and new media artist and inaugural director of the BMO Lab.

The creative potential of technology

As Rokeby explains, the BMO Lab aims to investigate the creative potential of AI and other emerging technologies in three novel and exciting ways.

The first will explore technology’s role in advancing the theatre arts themselves. Game-playing AI algorithms, such as Google’s AlphaZero, are transforming how grandmasters play chess. Similarly, Rokeby anticipates that advanced technologies hold the potential to conjure extraordinary performances out of actors and other artists. “Training in the arts requires transcending oneself to achieve greater levels of self-understanding,” Rokeby says. “We can deploy technology as a means for advancing an artist’s craft.” 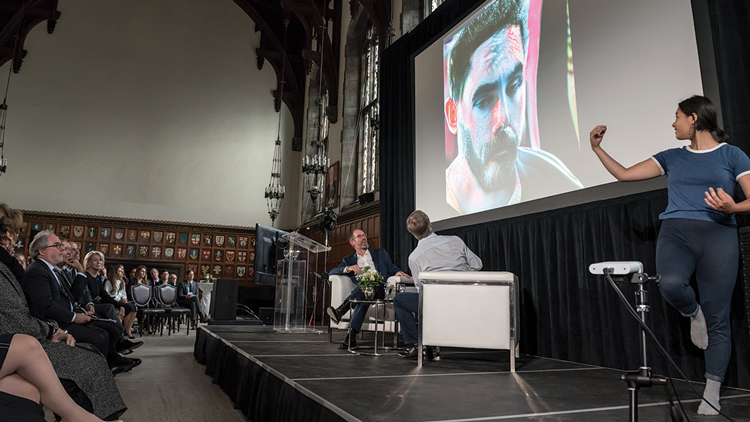 Rokeby cites the example of one of his own hi-tech installation works, Very Nervous System, in a theatrical production in Munich. The stage performance—set in an enchanted forest—replaced physical props on the stage with sounds triggered by the actors’ movements. Adding the technology forced actors to change their use of space because triggering sounds became crucial for creating the enchanted forest setting of the play.

The BMO Lab also aims to work with scientists and engineers in the early stages of developing a new technology, to shape its use for the arts. Adopting technology for creative purposes while it is still under development will allow BMO Lab participants to provide unique feedback about the lived experience of creatively adapting technology—feedback not typically available to inventors and engineers.

Technology is introducing significant changes in our lives, and we need to address them appropriately. Incorporating technology into the arts to illuminate those changes can be highly effective

As BMO Lab artists and technologists collaborate and establish a common language and frames of reference, Rokeby hopes they will learn to expertly anticipate and solve problems involved in developing and adapting new technologies. “As the BMO Lab becomes a place of cross-disciplinary translation,” Rokeby says, “the rich conjunction of technology and theatre will yield interesting results, both within the arts and also in the early development of technologies that may soon become part of our daily lives.”

A third way Rokeby envisions the BMO Lab exploring the creative potential of technology will be through attracting Canadian and international artists to create theatrical works that bring the public face to face with emerging technologies.

“Technology is introducing significant changes in our lives, and we need to address them appropriately,” Rokeby says. “Incorporating technology into the arts to illuminate those changes can be highly effective.”

For example, when students in the 2018 graduate course performed a scene from The Tempest, audience members surrounding the round stage helped to conjure the island setting of the play. As they moved, motion sensors triggered sounds that helped to sustain the illusion of the island.

By embracing the potential of new technologies, the BMO Lab will create similar opportunities for playwrights and directors to create theatrical experiences specifically designed to expose audiences to artificial intelligence, augmented reality, the Internet of Things, and other technologies. To this end, Rokeby is already in discussion with some of the most creative theatrical minds in Toronto and beyond.

“Theatre is a great way to explore and address the near-term social implications of technology, but there has been a tendency to take the dystopian view,” Rokeby says. “The BMO Lab’s approach will be neither negative nor positive about technology. Rather, we will seek an appropriate balance between being enthusiastic and critical of the use and effects of technology.” While Rokeby notes that powerful technologies can create conflicts in society, he adds, “Theatre is exceptionally good at showing relationships of conflict and resolution.”

How the BMO Lab will work

A crucial aspect of the work of the BMO Lab is that all students will be equally involved in the creative process—engineering and computer science students will not have a client relationship with theatre and arts students. The BMO Lab will run a new iteration of its graduate course, but Rokeby has plans to develop a cross-disciplinary undergraduate course to serve as a precursor for the graduate course. He also plans to encourage electrical engineering and computer science students to conduct their thesis work in conjunction with the BMO Lab.

Ultimately, by combining basic research in AI and other technologies with creative research in theatre, Rokeby envisions the BMO Lab as a place to move both technology and the arts forward together.