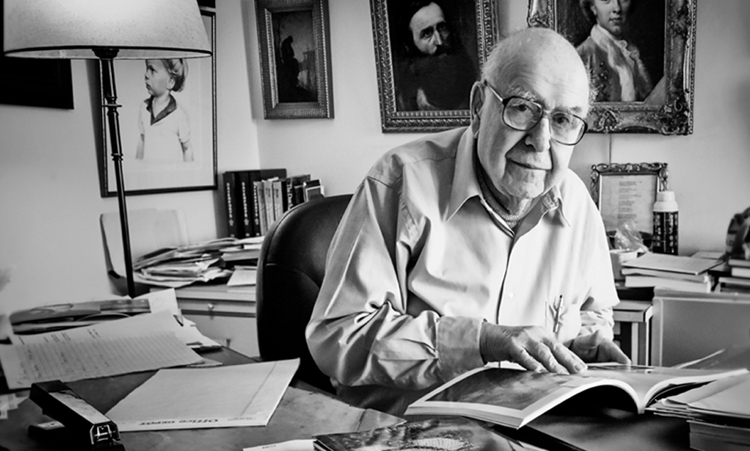 Dr. Alfred Bader, CBE, a self-made chemical entrepreneur and an expert on baroque art, passed away on December 23, 2018, at age 94. Together with his wife, alumna Dr. Isabel Bader (BA 1949 VIC, Hon DSL 1995 VIC), he was an outstanding philanthropist who supported important arts and education initiatives in his home community and around the world. At U of T, his gifts opened research opportunities to students and contributed to a thriving theatre space at Victoria University.

“Alfred Bader will always be remembered as a generous friend of the University of Toronto and an outstanding champion of education,” says U of T President Meric Gertler. “The support that he and his wife Isabel gave to Victoria University has provided undergraduate students with significant financial support as well as more opportunities to learn from world-leading scholars, and to undertake important research in arts and culture. It has also helped to build a vibrant theatre and film community centred at Victoria which radiates throughout the city and indeed around the world. On behalf of the University of Toronto community, I extend heartfelt condolences to Dr. Isabel Bader and to the entire Bader family on the loss of a beloved and extraordinary husband, father and grandfather.”

A generous philanthropist for education and the arts

In 1998, after establishing numerous scholarships and bursaries at Victoria University in the University of Toronto, Alfred and Isabel gave $6 million for the construction of the 500-seat Isabel Bader Theatre. A lecture hall, a workshop space, and a venue for concerts, plays and conferences, the theatre has become a locus for the thriving Vic arts community, while serving the wider Toronto community as a staple film festival venue.

Bader Philanthropies Inc., founded by Alfred Bader, recently gave a significant gift of $1 million to Victoria University to support its Scholars-in-Residence Program, which provides research opportunities for undergraduate students of the humanities.

“Through supporting the arts and research in the humanities,” says William Robins, President of Victoria University, “Alfred and Isabel Bader have, over many years, championed a vision of liberal education. By supporting students with scholarships and bursaries and providing research opportunities to deepen our students’ ability to understand, appreciate and imagine a healthy human society now and in the future, they have had a significant impact on the Victoria community. We are truly grateful for their tremendous generosity.”

In recognition of their leadership, the University inducted both Alfred and Isabel into the Chancellors’ Circle of Benefactors in 2018. In addition to their years of involvement and philanthropy with the University of Toronto, the Baders have generously supported Queen’s University and a myriad of other causes in the United States, Canada and Israel.

A dynamic life in science, art and love

Alfred Bader’s extraordinary life began in Austria in 1924, where his Catholic mother defied her family to marry his Jewish father. In 1938, at 14, he was evacuated to England along with 10,000 other Jewish children, only to be interned in Quebec as a German national once he reached age 16. There, he studied diligently and after his release, earned two degrees in chemistry and one in history at Queen’s University.

Drawing on his difficulties obtaining research chemicals as a graduate student, Bader co-founded Aldrich Chemical Company in 1951. The chemical supply firm was financially successful, and after its merger with Sigma Chemical Company in the 1970s, became one of the world’s top suppliers of chemicals.

Bader married Isabel Overton Bader in 1982. Isabel published their star-crossed love story in A Canadian in Love. She shares his passion for art and art collecting, an interest that, as he recounted in his 1995 autobiography, Adventures of a Chemist Collector, dated back to his childhood. Bader became an expert in baroque art, particularly the work of Rembrandt and his followers, and through the Alfred Bader Fine Arts dealership found paintings for prominent galleries such as the Getty Museum and Amsterdam’s Rijksmuseum.

Bader was predeceased by his first wife, Helen Daniels Bader. He leaves his second wife, Isabel Overton Bader, sons David and Daniel, and seven grandchildren. “Dr. Bader was not only passionate about the value of education and art but was generous in sharing that passion,” says David Palmer, U of T’s Vice-President Advancement. “While we mourn his loss we are comforted by his legacy, which overcame adversity to uplift others and create a positive impact—much the same as his beloved artworks do.”

BROWSE ALL NEWS
New gift to Dept. of Medicine marks 100 years of U of T’s first endowed chair
MORE NEWS

Alumnus David Dime supports health innovation at U of T