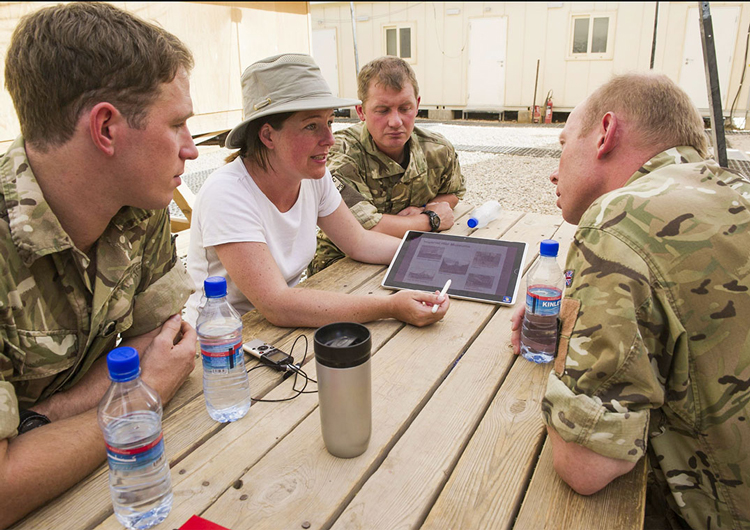 As the head of contemporary conflict at the Imperial War Museums in London, England, Louise Skidmore (MMSt 2004) has a job description that sounds more like a daring foreign correspondent than a curator toiling away in the backrooms of a museum. Her work has taken her to Afghanistan to collect artifacts and stories from the height of wartime.

In her career, Skidmore still draws on contacts that she made as a museum studies student at the University of Toronto, especially those she made during a four-month internship at the International Center of Photography in New York City—an experience made possible in part by the Vivian and David Campbell Family Foundation Summer Training Fellowship.

Vivian and David Campbell gave $300,000 over three years in the late 1990s to endow the fellowships, which subsidize internships for museum studies students at smaller-sized museums, galleries and historic sites. The success of the Campbell Fellowships and the similar Rebanks Family Fellowship convinced the museum studies program to make increasing support of paid internships one of their goals for the program’s 50th-anniversary celebrations in 2019.

“While museum studies internships offer students important opportunities to test out what they learn in the classroom, most of them are unpaid, which adds to the financial challenge many students already face,” said the program’s director, Associate Professor Cara Krmpotich. “This is why we wanted to put paid internships at the centre of our 50th-anniversary fundraising efforts. With the Campbell and Rebanks fellowships, the results are very clear.”

A foot in the door to the Ottawa museum world

As the Faculty of Information, home to museum studies since 2006, has reconnected with the program’s 800-plus alumni over the past year, many of them brought up the importance of their internships. Megan Richardson (MMSt 1990), the director of the Virtual Museum of Canada, a federally funded investment program managed by the Canadian Museum of History, gained entry to the Ottawa museum world through her museum studies internship at the National Gallery of Canada in 1989 after her first year in the program.

When I finished my degree, they hired me

Based on that experience, she focused her final year’s major research paper on ways to create new interpretive materials for children to use at the gallery. “When I finished my degree, they hired me to develop a series of self-guides for teenagers. It was directly related to what I had researched,” she says. “I was basically hired to put my money where my mouth was.”

Bringing museum-quality art to your workplace

Erica Chi (MMSt 2019) credits her internship with landing her a full-time job as an art administrator at the TD Bank Corporate Art Collection, one of Canada’s largest company collections, known for its Gallery of Inuit Art in the bank’s south tower in downtown Toronto as well as its works by artists like Lawren Harris and Jean-Paul Riopelle.

Chi had interned at U of T’s Art Museum, where her work focused on its “Art on Campus” initiative, arranging art loans to different University departments and buildings. At TD, she works under a senior curator on a variety of tasks, including art moves across the enterprise and co-operating with partner organizations on exhibits.

Unlike a public gallery where five to 10 per cent of the art is on display with the majority in storage, Chi says a corporate collection intentionally inverts that ratio. “Having art in your work environment or in client-facing areas, it becomes a conversation point and can help build relationships. It both enhances the setting and your experience of going to work,” she says.

How lunch with students led to fellowship support

The late David Campbell’s love of art led to his gift to the museum studies program in the first place. As collectors and philanthropists, Campbell (Hon LLD 2007) and his wife Vivian Campbell were particularly interested in the training of future generations of museum and art gallery curators, educators and administrators.

David Campbell participated in a series of casual lunches with students to learn more about them and to answer questions about the role of private collectors. A relationship developed that eventually led to the creation of the fellowships, which now fund five students per year.

As alumni like Skidmore, Richardson and Chi make clear, the Campbells’ generous donation ended up doing just what its benefactors intended.

By Suzanne Bowness with a file from Ann Brocklehurst