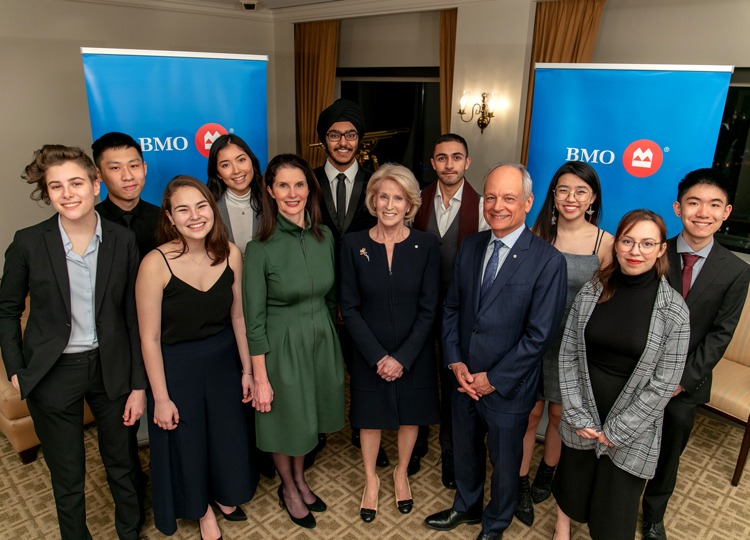 Aliya Izumi first dreamed of becoming a doctor when she was four years old, and would ask for anatomy books at bedtime instead of storybooks. Albert Cheng’s curiosity about the workings of the body at the cellular and molecular levels led to him representing Canada at the 2017 International Biology Olympiad. Julie Seeger is an accomplished cellist, ballet dancer, choreographer and aspiring architect—who also happens to run her own photography business.

These are the kind of remarkable biographical details that define BMO Financial Group National Scholars. Izumi, Cheng and Seeger are among nine new recipients of the prestigious scholarships at U of T who were fêted at a reception hosted by BMO Financial Group on February 26. Attendees included past and present BMO National Scholars as well as senior leadership from both the University and the bank, including U of T President Meric Gertler, U of T Chancellor Rose Patten, and Mona Malone, Chief Human Resources Officer and Head of People & Culture at BMO Financial Group.

“The University of Toronto is immensely proud of our BMO National Scholars, a diverse community of exceptional students from across the country,” said President Gertler. “We are also very grateful to BMO Financial Group, for their incredibly generous support of these promising young leaders.”

U of T was the first Canadian university to participate in the program, which was launched by BMO Financial Group to recognize outstanding students from across Canada. The BMO Financial Group National Scholarship covers tuition as well as incidental and residence fees for four years and is U of T’s most prestigious and competitive scholarship available to domestic students. Since 1998, 213 students at U of T have received the scholarships, with graduates going on to make important contributions in a host of fields from engineering to business to medicine to the arts, among many other areas.

Izumi, for her part, will never forget calling her mom to tell her she had received the scholarship. “She was driving and had me on speakerphone. When I told her I got it, she started screaming in pure joy and did not stop. I was terrified for her safety,” she recalled. “I’ll be forever grateful to BMO Financial Group and to U of T for that incredible memory with my mother, and for allowing me to make her so proud.”

BMO Financial Group is one of U of T’s most long-standing and committed supporters. For decades, it has supported a broad range of important initiatives at the University including the BMO National Scholars program and, most recently, the BMO Lab for Creative Research in the Arts, Performance, Emerging Technologies and AI. This newest initiative will help researchers explore artificial intelligence and other revolutionary technologies in completely novel ways.

BMO Financial Group is honoured to partner with U of T to bring innovation, education and opportunity to Canadians

“BMO Financial Group is honoured to partner with U of T to bring innovation, education and opportunity to Canadians,” said Malone. “The BMO National Scholars program demonstrates the strong collaboration between our two institutions and the shared commitment we’ve had to supporting the success of emerging Canadian leaders for more than three decades.”

In addition to philanthropy, BMO Financial Group has many longstanding ties to the University of Toronto. Many of its employees are U of T alumni and many of the bank’s several senior leaders have made vital contributions to the University as volunteers and advisors. These include former CEOs William Downe (MBA 1978, Hon LLD 2018) and Tony Comper (BA 1966 SMC, Hon LLD 1999) and U of T Chancellor Rose Patten (Hon LLD 2009), who continues to serve as Special Advisor to the CEO and Senior Executives at BMO.

“I am always delighted to take part in this annual celebration, which brings together these two great institutions that I care so much about,” said Chancellor Patten. “I am so proud of the University of Toronto. I am also very proud of its long-standing partnership with BMO Financial Group, which extends beyond the wonderful scholarship program.”