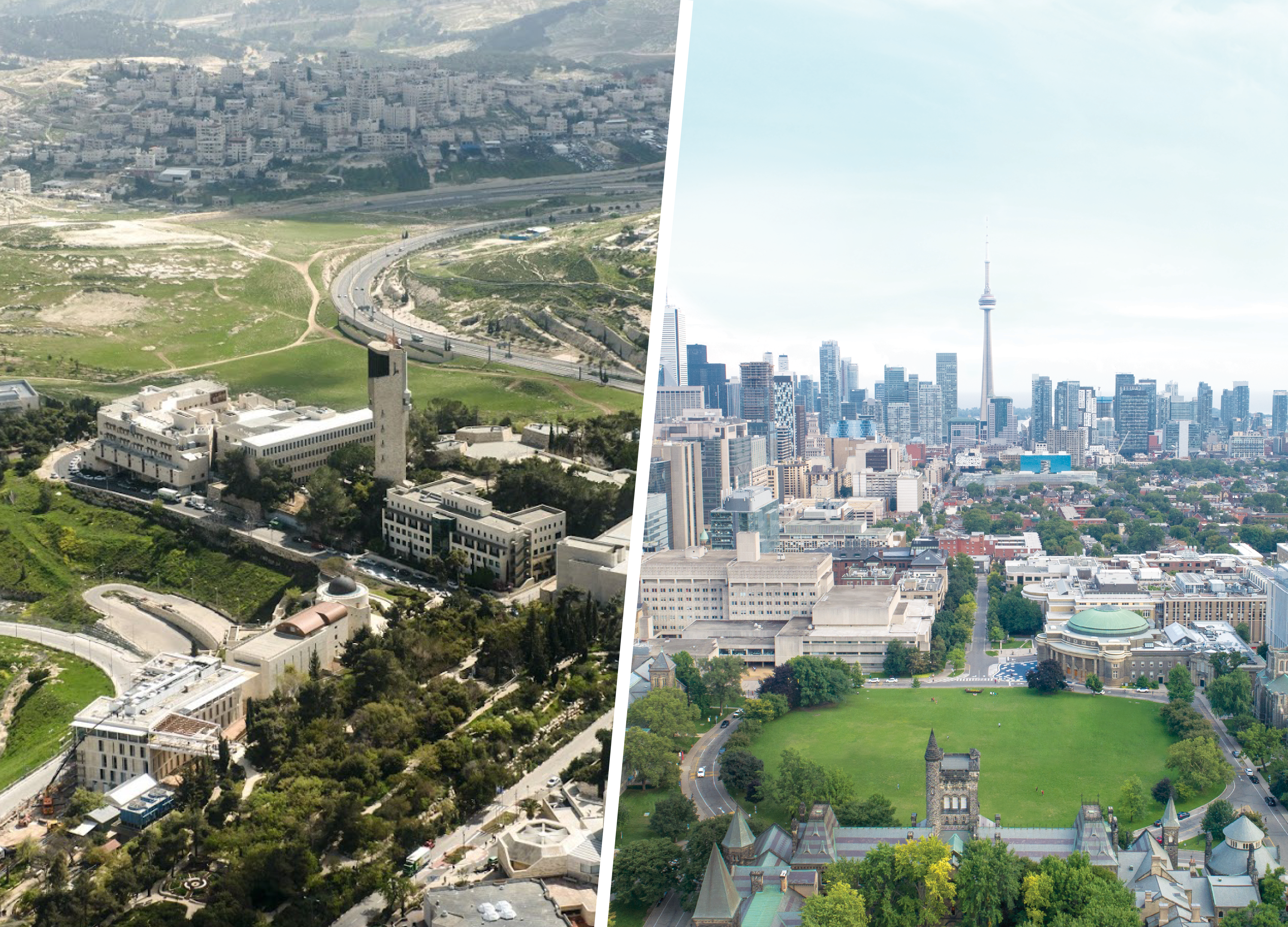 The University of Toronto and The Hebrew University of Jerusalem are celebrating a groundbreaking alliance in research and student entrepreneurship. An event on March 18, featuring Hebrew University President Asher Cohen, U of T President Meric Gertler, and other prominent leaders from both communities, kicked off a $15-million fundraising campaign for the Alliance across Canada, Israel and beyond.

The University of Toronto – Hebrew University of Jerusalem Research & Innovation Alliance is built around two programs. The first enables joint research efforts in the sciences or humanities with financial support for four-year studies and one-time seeded projects. The second program supports an “International Entrepreneurship Highway” in which students from Jerusalem travel to Toronto, and vice versa, to work as paid interns at startups while also studying and receiving mentorship at centres for entrepreneurship at both universities.

In their remarks, both university presidents expressed excitement for the Alliance and admiration for their partner institution. “This Alliance is an opportunity to advance excellence in our combined research and academia,” said President Cohen. “Key to this collaboration is our shared expertise and strength in innovation and entrepreneurship, represented at the Hebrew University by the Asper-HUJI Innovate Center, another example of Canadian support.

For his part, President Gertler said U of T is delighted to have such a distinguished partner that counts eight Nobel Prize winners among its many achievements and a list of founders that includes such luminaries as Albert Einstein, Martin Buber and Sigmund Freud. President Gertler also noted that the launch event came roughly one year after the official declaration of a worldwide pandemic. “The crisis has reminded us that our greatest challenges, from public health to climate change, are global in scope,” he said. “Responding to these challenges requires collaboration among our brightest minds, transcending disciplines and borders.”

We’ve built the foundation for a larger-scale research and training alliance and this is what we are launching today.

The Canadian Friends of Hebrew University of Jerusalem, which facilitates academic and research ties between Canada and Israel, played a critical role in making the Alliance a reality. The group joined U of T and the Halbert family to allocate $5.9 million in endowed funds to launch the Alliance. The campaign to raise $15 million will build on this strong start to realize the full vision for this exciting international initiative.

Ronnie Appleby, a U of T alumnus with deep connections to both universities, is leading fundraising efforts as chair of the Alliance Campaign Cabinet. He said the global pandemic highlighted the crucial role of top research universities in supporting healthy and vibrant societies. “As individuals in this society, it is the time for us to support the global research mission of this Alliance. And the isolation that has been felt around the world, gives new impetus to forging even stronger international partnerships,” said Appleby. ”However, we can’t do this without the support of our entire community.”

Professor Oron Shagrir, Hebrew University’s Vice-President International Affairs, commented that the creation of the Alliance is a logical next step in the universities’ relationship. “The two institutions already have a very successful history of collaboration that includes joint teaching, exchange programs, research programs, workshops and more,” he said. “We’ve built the foundation for a larger-scale research and training alliance and this is what we are launching today.”

Inaugural research projects funded by the Alliance include a study of how climate dynamics affected early human evolution in the Kalahari Basin. Another project is exploring protein engineering and design to develop treatments for a wide range of diseases from COVID﻿-﻿19 to cancer.

The International Entrepreneurship Highway, meanwhile, will begin when public health and travel restrictions permit. Joseph Wong, U of T’s Interim Vice-President International, discussed how the entrepreneurship highway will connect innovation networks including the health sector, accelerators and incubators, as well as the venture capital community. “The question we want to address is how we connect not just our two universities but our two ecosystems?” said Wong. “And start a flow of young entrepreneurs back and forth, learning from one another, and gaining real hands-on experience in each others’ environments.”

U of T Professor Janice Stein, recognized several times during the event as a driving force behind the Alliance, summarized the task ahead for both institutions and their many supporters. “You can sense the excitement—from the academic community, the research community, and the leadership of both universities. Now we need help to make this dream come true,” she said.

Would you like to know more about supporting the Alliance?