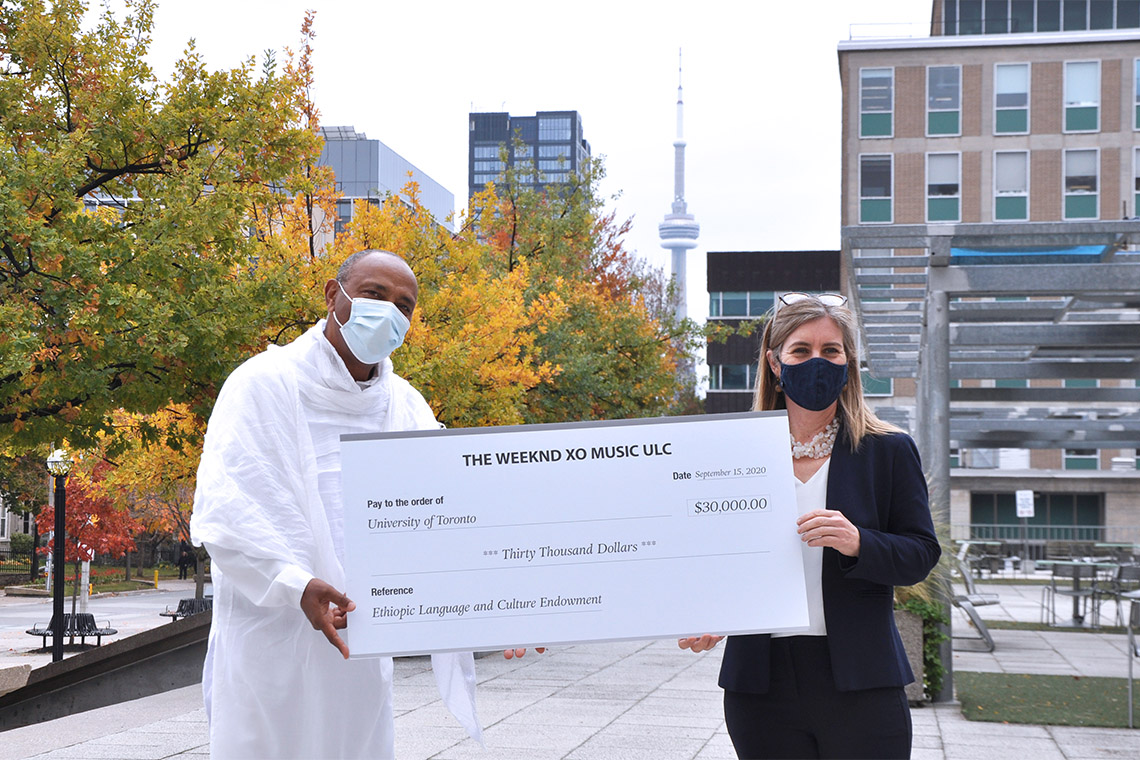 U of T’s Ethiopic program soars past $500,000 endowment goal

U of T’s Ethiopic program soars past $500,000 endowment goal

The future of U of T’s Ethiopic program — the only one of its kind in North America and among a handful in the world — just got brighter. The endowment that makes the program possible has surpassed its goal of $500,000, thanks to another gift from Toronto native, Abel Tesfaye, the international, award-winning singer, songwriter and recording producer known as The Weeknd. This support enables U of T to offer at least one Ge’ez language course each year.

“Our heartfelt thanks to The Weeknd for his ongoing commitment to Ethiopic studies at U of T,” said Professor Melanie Woodin, dean of the Faculty of Arts & Science. “This gift means the endowment celebrates a significant fundraising milestone. For us, it signifies an important partnership with the Ethiopian-Canadian community, one we hope to continue to grow. We share a vision and an understanding of the value in preserving the Ge’ez language. The impact of The Weeknd’s continued support is truly appreciated, for current and future faculty, students and alumni.”

Ethiopic studies at U of T launched three years ago with a course on Ge’ez, an ancient language in Ethiopia used primarily for liturgical Christian services. Currently, U of T is the only university in North America, and one of the very few universities in the world, that regularly offers a course on Ge’ez. It’s part of the Semitic group of languages, including Hebrew, Arabic and Aramaic, and is no longer spoken in Ethiopia but remains a fundamental language for classical studies, such as Latin and Greek.

The program, jointly run by the Department of Near & Middle Eastern Civilizations and the Centre for Medieval Studies, was just shy of reaching its fundraising goal when The Weeknd, recently named one of Time Magazine’s 100 Most Influential People of 2020, made a $30,000 gift.

This is his second donation to U of T in support of the Ethiopic program. His first was a $50,000 gift in 2016, as part of the fundraising drive led by the Bikila Award — an Ethiopian-Canadian organization that fosters academic and business excellence and encourages volunteerism — to galvanize its community to support the new endowment.

Tessema Mulugeta, president of Bikila, called it “a pivotal moment in our history here in Toronto” while recently presenting The Weeknd’s cheque, together with board member Behailu Atnafu and The Weeknd’s parents, Ms. Samrawit Hailu and Mr. Walelegne Teshome, to Dean Woodin on a fall day at the Faculty of Arts & Science. 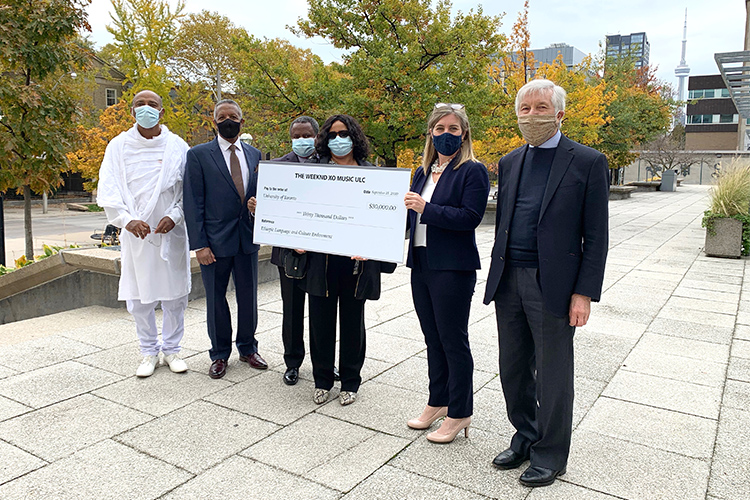 “U of T’s Ethiopic studies will illuminate to the world the hidden, untouched millennial scripts in Ge’ez, and uncover rich texts of philosophy, grammar, mathematics, astronomy, history, medicine and law,” said Mulugeta. “During this modern age, current and future generations of U of T students can continue to access Ethiopia’s past and unlock tantalizing deposits of wisdom from distant eras of human history.”

There are few professors who can teach Ge’ez. “So U of T has a very big job to do”

For Professor Michael Gervers, who teaches Ethiopian history at the University of Toronto Scarborough and St. George campuses, more than 40 years of scholarly research, including digitizing church manuscripts in Ethiopia, has crystallized “how significant and important this culture is.” He gave the first gift in 2015 to launch the endowment campaign.

“I spent decades in Ethiopia and saw that almost every single church I went to had manuscripts that nobody was reading, except the monks and priests for their daily or weekly services. But there was all this other literature just sitting there.”

Gervers explained that not many people are aware that the King of Ethiopia converted to Christianity before the Roman Emperor Constantine did in Byzantium. “It goes right back to somewhere around 333 to 340 CE. And you can’t have a religion without a book,” said Gervers.

With Ethiopia having a written historical tradition older than any other country in Africa, that’s a lot of books. In fact, it’s been recently discovered that the oldest complete Gospel manuscript in the world is from Ethiopia, opening up a plethora of new scholarship questions.

Undergraduate student Saba Ebrahimpour, a member of New College, is in the program and said it’s very important for her to read the literature in its original Ge’ez.

“When I was studying for this course, I was going through the Bible in the English translation, and the professors were teaching us how to translate it. I compared the two languages, and there were some differences between the two.”

Ebrahimpour searched for other sources but found there weren’t any. And she said there are few professors who can teach Ge’ez. “So U of T has a very big job to do.” 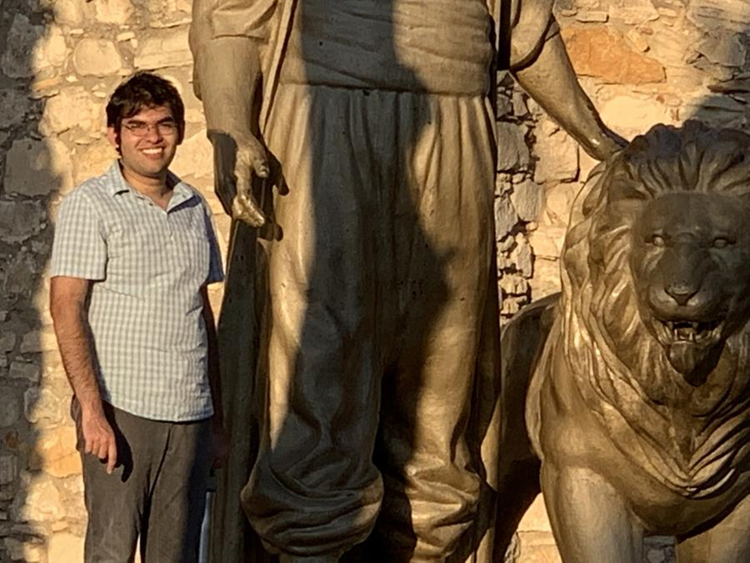 Studying Ge’ez, a language linked to a rich literature and civilization, “”reopens many lost horizons”

Ge’ez will be a significant component of graduate student Arshan Hasan’s research, and this first course is a vital start.

“Of the classical Semitic languages, Ge’ez is one of the most understudied despite it being one of the most unique. It has a unique script in its family that really needs to be taught alongside the language, rather than self-taught. Grammatically it is so remarkable and so different from its sister languages while also still being very familiar,” said Hasan. “It reopens many lost horizons.”

Highlighting, remembering and teaching the history, languages and cultures in this cradle of civilization in the Horn of Africa are just some of the reasons Ethiopians in Canada have supported and continue to give to U of T’s program.

“We were and are people of many literatures,” said Mulugeta. “The study of Ge’ez will help us make sense of ourselves, our early civilizations, our beliefs and cultures, and most importantly, our interconnectedness in the world.”

The program, and particularly the Ge’ez course, has put U of T “on the map because we’re doing it and nobody else is,” said Gervers. “The Ethiopic program at U of T has enormous potential.”