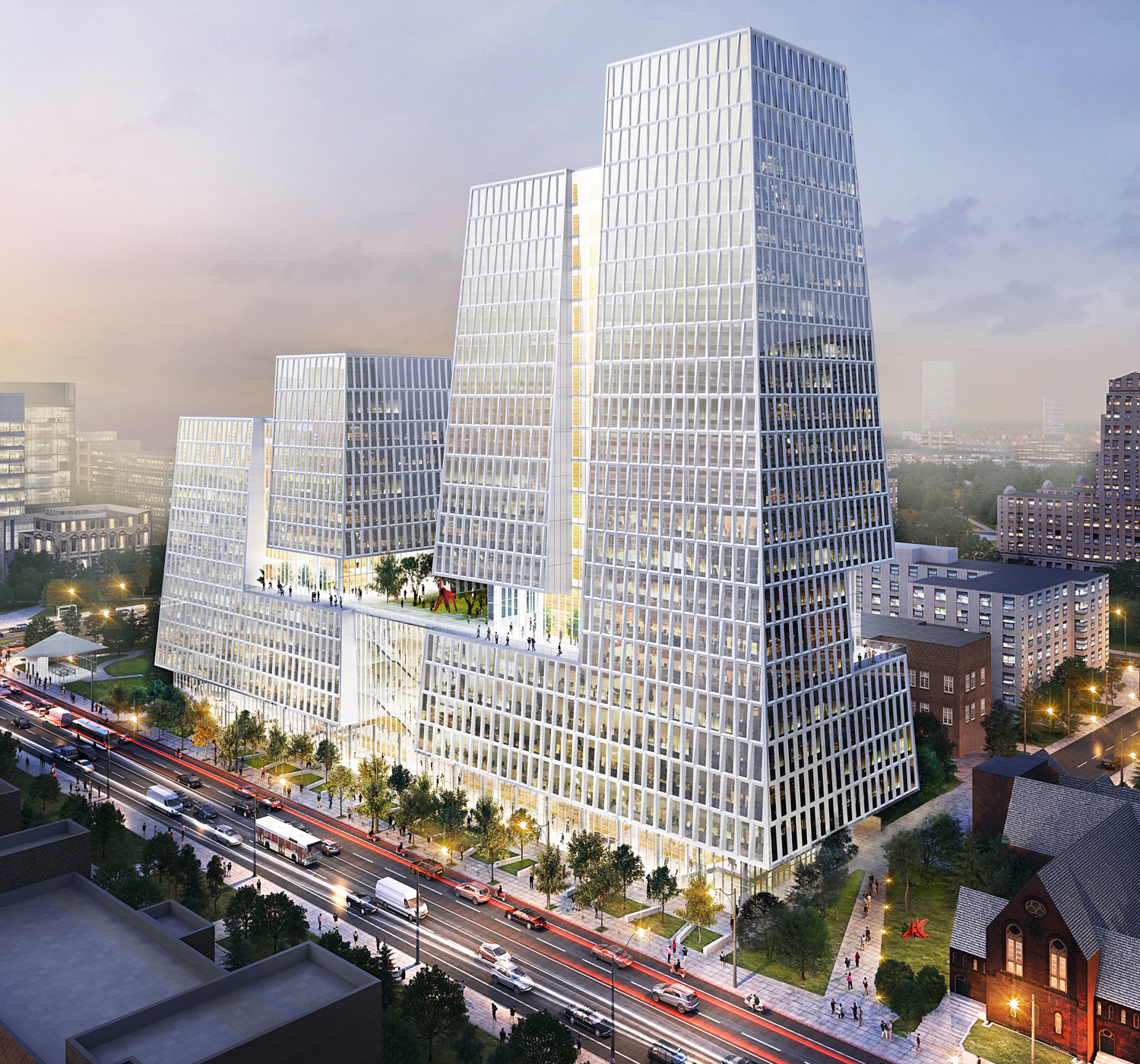 Philanthropists and business leaders Gerald Schwartz and Heather Reisman joined U of T President Meric Gertler, Chancellor Rose Patten, Vector Institute President and CEO Garth Gibson, and other University and community leaders to break ground on the Schwartz Reisman Innovation Centre on College Street on November 12, 2019. Designed by WEISS/MANFREDI, one of North America’s leading architectural firms, the iconic Centre will create a new gateway for the University, steps from Queens Park and at the centre of Ontario’s innovation ecosystem. 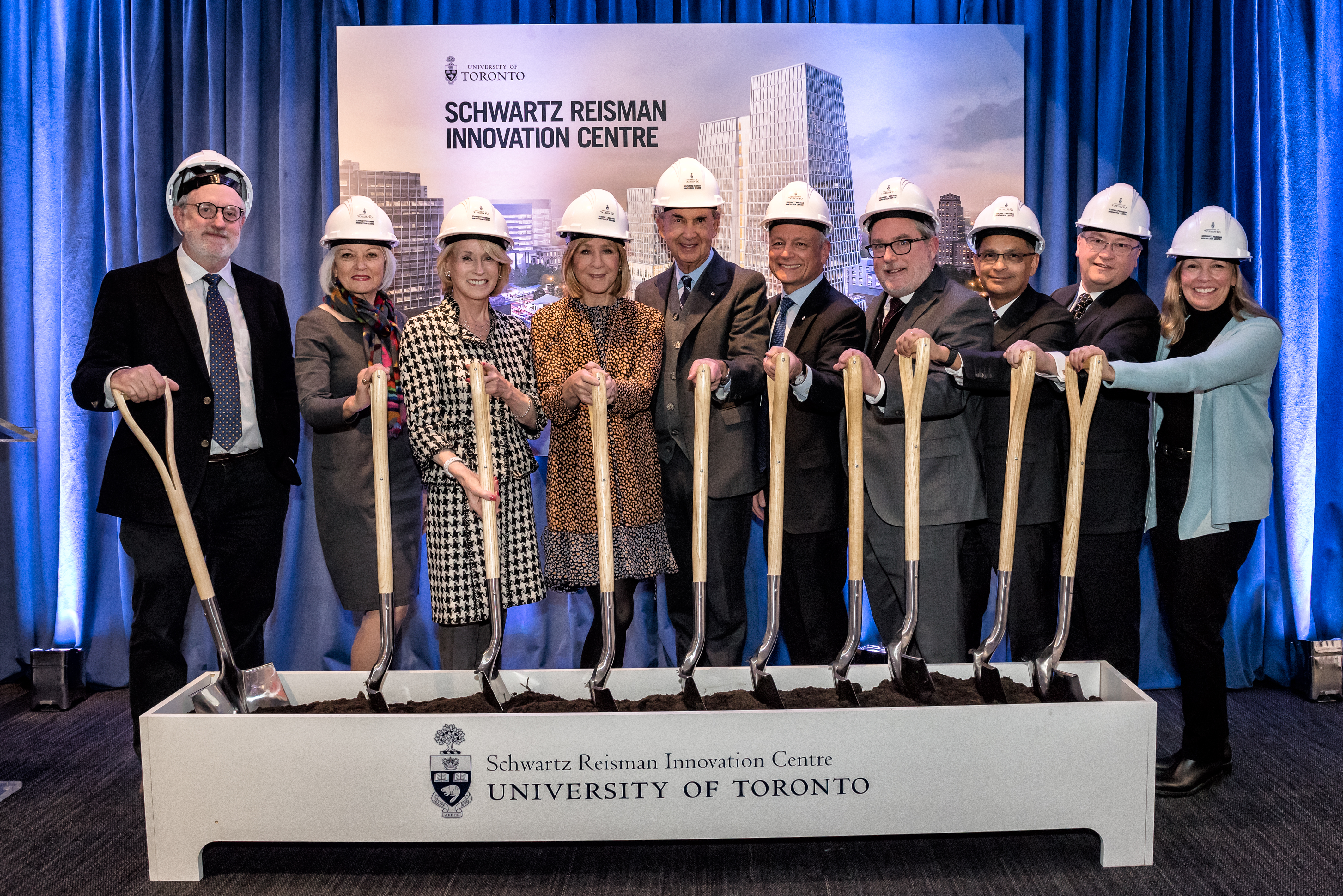 “U of T is home to leading thinkers in AI and biomedicine who are advancing innovation in these fields and addressing their role in society,” said Ms. Reisman and Mr. Schwartz. “Creating the centre and the institute will supercharge the University’s ability to recruit and inspire the best talent in the world in these and related fields.”

The striking, glass-clad 750,000-square foot complex will anchor U of T’s unique cluster of world-leading artificial intelligence scientists and biomedical experts, its world-class entrepreneurship network, and the country’s largest concentration of student- and faculty-led startups.

The Centre will be constructed in two phases over the next few years. The first phase will erect the 12-story west tower, creating 250,000-square feet that will focus on AI and innovation, and provide a new home for the Schwartz Reisman Institute for Technology and Society and the Vector Institute, as well as other leaders of innovation. The second phase will build the larger, 20-storey west tower, which will provide 500,000 square feet of space for life-saving biomedical innovation. 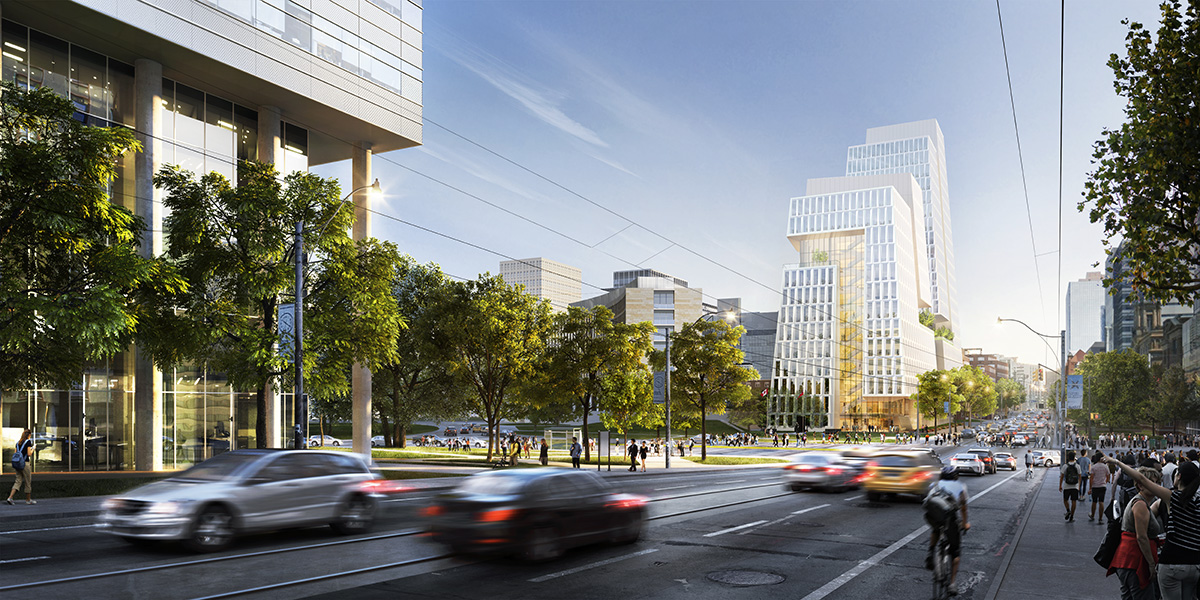 Once complete, the Centre will feature vertical gardens, soaring atria and collaborative spaces that promote intellectual exchange and invite the public to take part in events and interact with scholars and innovators. The building’s engaging spaces will host thousands of researchers, investors, industry partners and international visitors each year.

“The Schwartz Reisman Innovation Centre will be a magnificent architectural landmark and a new focal point for Canada’s leading innovation ecosystem,” said President Gertler. “It will gather in one place U of T’s world-leading artificial intelligence scientists and biomedical experts, and integrate them into our dynamic entrepreneurship network. Thanks to Gerry and Heather’s outstanding generosity and vision, this new centre will confirm to the world that Toronto and U of T are global leaders in AI and biomedical innovation.”

The Schwartz Reisman Institute for Technology and Society draws on U of T’s signature strengths in the sciences, humanities and social sciences to ensure that technologies and social structures work together to improve all aspects of life. The University appointed Professor Gillian Hadfield as the inaugural director of the Institute, as well as the inaugural Schwartz Reisman Chair in Technology and Society in July. Professor Hadfield is already engaging researchers in the Institute’s work and drawing on her broad background—in economics and law, humanities, business and technology—to shape the Institute’s direction for the next few years.

“The Schwartz Reisman Innovation Centre will be a stunning new building in the heart of Toronto, housing the new Institute alongside the city’s most dynamic innovators and researchers. I am excited to be a part of this new vanguard in effective, cross-disciplinary research and concrete solutions to some of our biggest challenges,” said Professor Hadfield.