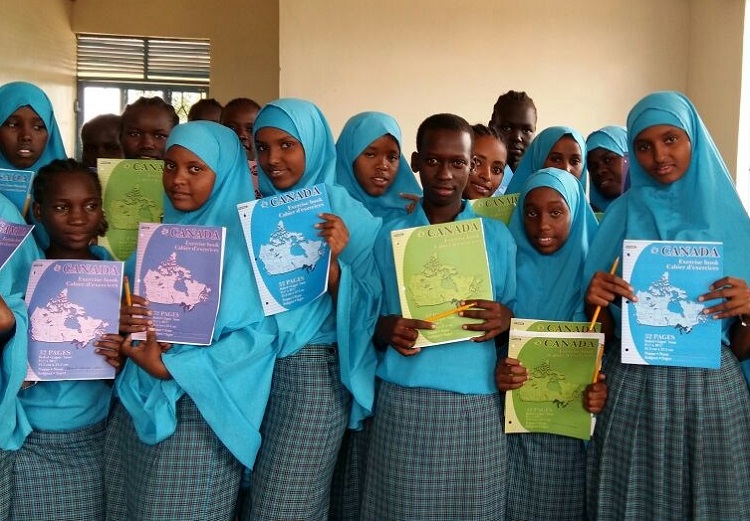 At Woodsworth College in the University of Toronto, faculty, students and alumni believe that post-secondary education can be life-changing.

For a select few graduates of the Morneau Shepell Secondary School for Girls in Kenya, this maxim is doubly true. Not only are they pursuing sponsored undergraduate degrees at Woodsworth; they will do so as landed immigrants who have the opportunity to build new lives in Canada.

For the next five years, up to five young women will enter U of T each year, under the umbrella of the Morneau McCain Scholars program. Underwritten by a $1.3-million gift from Nancy McCain and Bill Morneau, the project was created in partnership with the World University Service Canada (WUSC). The students’ degrees will be financed through a combination of donations, grants and bursaries, and Woodsworth College will provide academic and social support.

What’s the next step after building a school? Opening the door to university

The Morneau McCain Scholars program grew out of the success of Morneau Shepell Secondary School for Girls, the first girls’ high school in the Kakuma Refugee Camp in northwestern Kenya. Established in 2014 by the Canadian human resources firm Morneau Shepell, the school offers an educational opportunity that can lead to economic self-sufficiency, giving young women options beyond early marriage.

They worked so hard and had incredible resilience; they just wanted opportunities to succeed

“We realized we could do something tangible that would make a real difference,” says Bill Morneau, now Canada’s Minister of Finance, and former chair of the firm. As the school flourished, it became clear to Morneau and his wife, Nancy McCain, that its graduates might have the opportunity to attend post-secondary school in Kenya, but as refugees, they wouldn’t be allowed to obtain formal work. “We were motivated to take the next step,” says McCain. “They worked so hard and had incredible resilience; they just wanted opportunities to succeed.”

The couple were led to Woodsworth College through Lois Rowe, then principal of Havergal College in Toronto, and her husband, U of T’s Distinguished Professor Locke Rowe. Lois Rowe helped McCain and Morneau’s daughter, Clare Morneau, set up a pen pal program between Havergal and Morneau Shepell Secondary School, then made a fact-finding trip to Kakuma.

“I met many young women who were driven and impassioned,” says Rowe. “They deserve a real and sustainable chance at long-term success, and that meant considering options that would allow study and work abroad.” She connected Morneau and McCain with WUSC, which already had a program bringing refugee students to Canadian universities, including U of T. WUSC students receive a scholarship for their first year of university and are eligible for landed immigrant status as part of the program agreement; the Morneau-McCain Scholars program will follow a similar model.

A web of student support at Woodsworth College

The first two Morneau McCain Scholars arrived at U of T in the summer of 2018: one student from Somalia and one from South Sudan, countries ravaged by war. Woodsworth personnel have worked hard to help make the transition to life in Canada as smooth as possible, from welcoming balloons at the airport to peer support and academic assistance.

Woodsworth’s dean of students, Liza Nassim, assembled a group of seven international volunteers — many of them from Africa — to help the students adjust to social life at U of T and Michelle Manks, a senior campus engagement manager for WUSC, conducted an introductory workshop. The young women also met WUSC and Mastercard Foundation students on campus. “We want them to feel safe, secure, and welcome and the volunteers are the key,” Nassim says. “But we also want to give them the freedom and opportunity to find their own way.”

Janice Asiimwe, Woodsworth’s student life co-ordinator who is from Africa herself, says the summer support was “transformative.” “Initially, they were shy. Now, they are becoming more open. They are also more comfortable with things such as the money, transportation and technology. They’ve adjusted to the culture really quickly and they’ve had a great group to support them.”

Ambassadors for the power of making global connections in the classroom

The students will be our partners in developing this program

In September, the students enrolled in the full-time Millie Rotman Shime Academic Bridging Program, giving them access to a wide-range of academic supports, including academic advisers, learning strategists and study skills seminars. “We are sensitive to the fact that there are always alternative pathways for achieving success,” says Cheryl Shook, the College’s assistant principal and registrar. “It’s the first time we’ve run this particular scholarship program, so the students will be our partners in developing it.”

“U of T students are learning to be citizens of the world,” says Joe Desloges, principal of Woodsworth College. “Who best to be ambassadors for that than students who come from international backgrounds? We can’t replicate the world in the classroom without them and we hope they gravitate toward programs where their international perspectives make a big difference.”

How bursaries helped both this alumna physician—and her patients