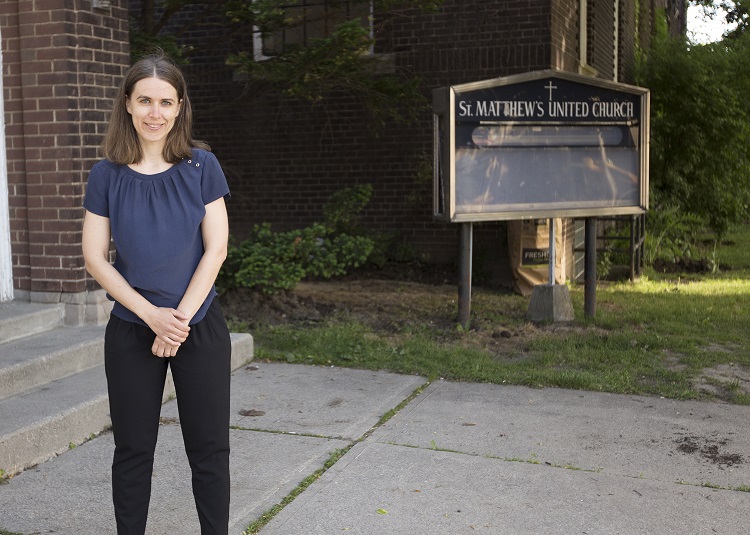 Clara Shipman grew up practically inside St. Matthews United Church, in a leafy midtown Toronto neighbourhood. Her family lived next door to the church, and her parents were deeply involved in the community. She went to Sunday school there, and later worked at the non-profit daycare that’s housed in the church basement.

Fast forward a decade or so. Shipman now had a master’s degree and was working at LGA Architectural Partners in Toronto. And St. Matthews United was facing the same problems as many other downtown churches: a dwindling congregation, and a crumbling building approaching its 100th birthday.

So St. Matthews did what many other congregations have been forced to do: it put together a redevelopment committee to consider the future of the church. And it invited the young architect to join.

“The plan,” says Shipman, “was to find an approach that would allow us to continue using the space as a church, but also to support community use and involve a developer to build affordable housing on the property.”

That’s the Holy Grail of church re-development: converting the building to mixed use, finding new revenue, and preserving the space for use by religious and community groups. But in reality what often happens is the opposite: either condo conversion or demolition.

Becoming an expert to solve the problem, with a U of T degree in planning

Shipman and the rest of the committee got to work, but soon discovered how difficult it was to plan a conversion. “Congregations are really not equipped to do redevelopment,” Shipman says. “Their expertise is in guiding people and conducting sermons, not in how to come up with a financially viable redevelopment proposal and a site-plan application.”

Soon, Shipman realized not only that there was a crying need for planning expertise in church conversion, but that—despite the fact that hundreds of Toronto churches had already been redeveloped—not many people had the skills to step in and help. That’s when she decided to go back to school, and do a master’s degree at the U of T Department of Geography and Planning.

How do you leverage the most public value from all of that property?

“With architecture you end up focusing on buildings,” she says, “but I wanted to think about design on a larger scale. I was always interested in a broader understanding of built fabric. Working as an architect, I felt like I had lost sight of the bigger picture. I felt that, to understand how developments get made, I needed to understand the planning and financial and political picture.”

Supervised by Matti Siemiatycki, a professor of geography who is also the interim director of the School of Cities, and supported by a donor-funded scholarship, Shipman worked on a survey of United Church buildings in the Greater Toronto Area, looking for patterns, and ideas on how to better manage underused church space.

Her research, says Siemiatycki, could point the way to transforming the modern North American city. “The church is just one institution among many that are holding significant value in their properties,” he says. “Whether it’s the school boards, religious institutions, or the city—we can now start looking at all of those in a different way and say, ‘How do you leverage the most public value from all of that property and what would further the public interest?’”

Shipman did indeed find patterns: suburban churches were often sold to other denominations—in effect retaining their status as public spaces—but downtown buildings were more likely to be converted into condos or some other private space. And many churches, all over the city, had been torn down.

But she also found successes, such as the 40 Oaks project in Regent Park, where an old church was torn down, and a new development on the property incorporated affordable housing, community space, and religious space that also houses the United Church of Canada Archives.

Shipman talked to all the players in that project, and put together a kind of redevelopment blueprint for churches to follow. “I think 40 Oaks is very informative,” says Shipman. “It could be useful to guide our next steps at St. Matthew’s, but also for a lot of other congregations that are thinking about redevelopment, just because there are so many considerations to factor in. So I’ve been sending this report around, and it’s been really well received.”

“Clara’s work sits at the cusp of a transformation in the way we build cities, and demonstrates some best practices on how this can be done,” says Siemiatycki. “You have opportunity for people with imagination and creativity and sensitivity to think about what’s possible, and what a community space in the 21st century should look and feel like.”

For her academic research, Shipman received the Friends of Planning Graduate Scholarship for Innovation, which was endowed by Annual Giving donors. A greater reward came just after she had finished her academic work: the St. Matthews congregation voted unanimously in favour of a redevelopment plan that includes a 50-50 mix of affordable housing and market-priced condos, as well as a renovated church sanctuary and space for community groups.

“The redevelopment committee put in a lot of effort over several Sundays to present the plan to the congregation,” Shipman says, “starting with my work showing the overall redevelopment landscape in Toronto. So when it came to the decision, people knew what they were saying yes to, and why it was necessary. It was so nice to see that the congregation is supportive. It’s definitely the right choice.”

Your annual gift supports students in the Faculty of Arts & Science who are building a more equitable, democratic and socially healthy Toronto.

Your annual gift supports students in the Faculty of Arts & Science who are building a more equitable, democratic and socially healthy Toronto.