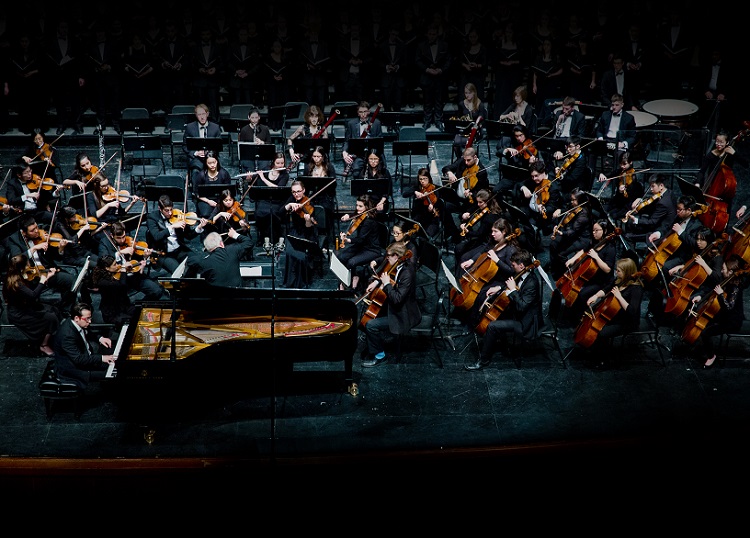 Since 1918, the University of Toronto’s Faculty of Music has provided a foundation for musical education and research in Canada. Many of our country’s leading cultural organizations, including the Toronto Symphony Orchestra, the Canadian Opera Company and the Royal Conservatory of Music, trace their roots to the Faculty of Music.

Annually, the Faculty presents some 600 performances—more than any other arts organization in the city. While this year is no exception, the season includes a number of concerts featuring works by faculty composers over the last 100 years, as well as collaborative concerts combining major ensembles. The Faculty aims to bring its world-class programming to its largest audiences ever and highlights 150 of its most outstanding offerings—100 of which have free admission—in its annual Notes brochure. These include concerts, performances by visiting artists, master classes, lectures and special events open to the public. The full listing of events can be found on the Faculty’s website, with a special note acknowledging those specific to the centenary.

“For a century now, the Faculty of Music has been at the centre of music creation, performance, education, and research in Canada,” says Professor Don McLean, Dean of Music. “Our distinguished alumni are found in all facets of musical life and serve as transformative, creative artists, cultural ambassadors and educational leaders across Canada and around the world. Our vision for the next century is to raise the Faculty’s global profile and impact, and to bring the world’s top talent to the artistic and academic opportunities that abound in Toronto.”

While promoting its 2018-19 season programming to the public, the Faculty is also launching a centenary fundraising campaign, led by Dean McLean and its newly formed volunteer Advisory Council, comprising leaders in music, culture and business from across the Toronto region. Among the several campaign priorities, the Faculty is highlighting a transformative opportunity to name the Faculty, funding for its internationally acclaimed Opera Program, the naming of a new recital hall in the 90 Queen’s Park project, scholarships and fellowships for Canadian and international students, and support for the Music Library, one of the greatest academic music libraries in the world.

“It’s exciting to be a part of the Faculty at this important moment in its history,” says Advisory Council member Janet Stubbs. “Ever since I was a student here in the Opera Diploma program, I’ve recognized the Faculty’s vital role in developing the performers, composers, scholars and educators who sustain Canada’s cultural economy. I encourage everyone to come to a Faculty event this year and see this talented community first hand.”

During the post-war years, through the 1970s, the Faculty expanded its enrolment and course offerings significantly, while in the 1960s it moved from College Street to its current location, the Edward Johnson Building, in the northwest sector of Queen’s Park Circle. The Faculty focused on growing its graduate enrolment throughout the 1980s and 1990s and today offers five programs to more than 550 undergraduate students and four degree programs to nearly 350 graduate students. It is Canada’s largest university-based music school for professional training and research in many music and music-related disciplines including composition, performance, jazz, opera, early music, historical performance, musicology, ethnomusicology, music theory, music education, music and health sciences, and music technology and digital media.

“U of T’s Faculty of Music has an exceptional history of talent development,” says David Palmer, Vice-President Advancement, who holds a graduate degree in music from Princeton. “As it begins its second century, the Faculty has the potential to be a global leader in fostering music as a means of cross-cultural understanding and research that explores the links between music, human cognition, aging, health and well-being. Its faculty members and students are not just virtuoso performers—though many of them are certainly that—but are also pushing the limits of knowledge and reinventing the field in new and exciting ways. I hope everyone with even a passing interest in music joins the Faculty for its centenary season.”

Support the Faculty of Music's vision for our next century.