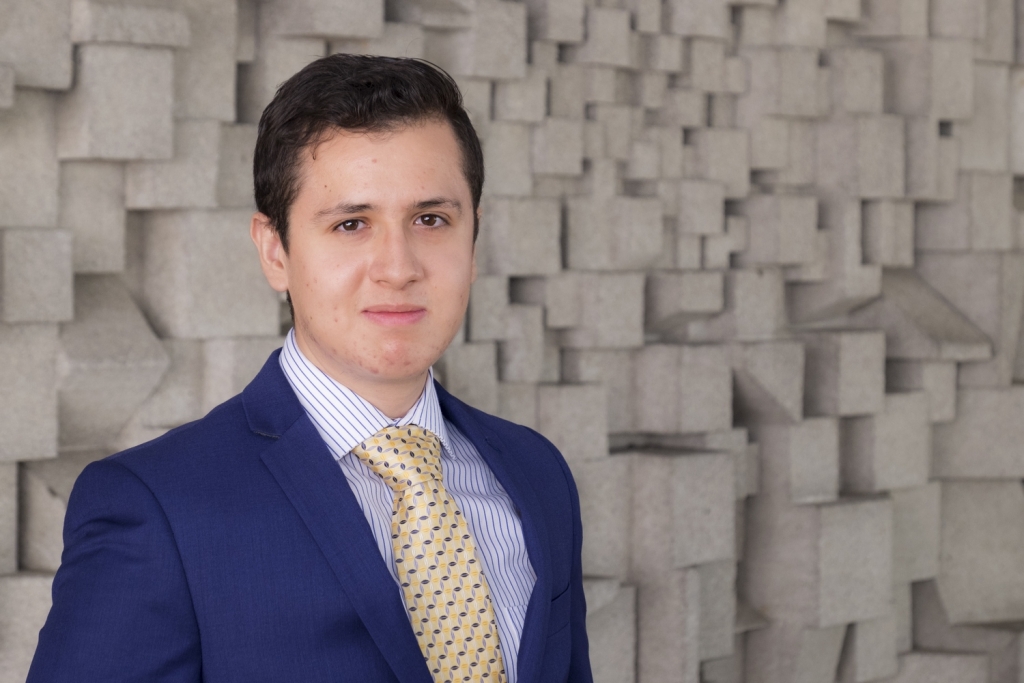 Joan Miguel Romero came to U of T in the second cohort of Schulich Leaders Scholars in the fall of 2013. A Victoria University student, he is graduating this June from the Pathobiology Specialist and Immunity Major programs at the Faculty of Arts & Science and plans to start his master’s studies in the department of Laboratory Medicine and Pathobiology at U of T this coming fall.

Canadian businessman Seymour Schulich started the Schulich Leaders Scholarships in 2012. The awards promotes STEM disciplines (science, technology, engineering and mathematics) by supporting 50 students annually across Canada who have demonstrated a commitment to their communities and a strong interest in pursuing a STEM degree.

Romero is the third Schulich Leader to graduate from U of T. Last year William Kwan graduated with a BSc in computer science and is now pursuing his own startup in the eSports market. Kyle Wamer graduated the same year with a BSc in mathematics and physics and is undertaking graduate studies at UBC. Since these students arrived, Dr. Schulich has expanded the focus of the scholarship to include engineering students and has doubled the number of scholars at U of T. Next fall we will welcome four new scholars from Moosejaw, Sask., Victoria, B.C. and the Greater Toronto Area.

Joan, how did you find out about the Schulich Leaders Scholarship?

My high school guidance counsellor told me about the opportunity. It was very new then, it was only the second year it was offered, so a small group of us applied and I was selected by the school to have my nomination put forward.

What drew you to the University of Toronto and Victoria University?

I always wanted to attend U of T. In grade 11 I applied to a mentorship program in genomics and pathobiology at the University and found out that they had an undergraduate pathobiology program, so from that point I knew I wanted to be a part of that. My underlying interest for entering that program was my father’s passing of pancreatic cancer when I was 14; this has driven me to study the pathobiology of this disease.

In terms of colleges at U of T, I liked the idea of attending Victoria because it was very student focused, which complemented studying at such a big university. The Vic One program was another reason I chose Vic. But another strong reason was Vic for a Cure. It was very similar to a club I’d started in high school, Bigger than Cancer, and I wanted to be a part of this during university. I’ve learned about the mechanisms and manifestations of various diseases in lectures and that has been very fulfilling, but I wanted to actively help in fighting this disease. This year, I served as co-president for Vic for a Cure, which allowed me to continue my passion of helping raise money and awareness for cancer research.

What impact has the Schulich Leaders Scholarship had on your university experience?

Because of my father passing away from cancer, going to university without this financial support would have been difficult. The scholarship has given me the opportunity to focus exclusively on my studies and extracurricular involvements. Additionally, participating in cancer research during my summers allowed me to gain a deep appreciation for and interest in scientific research.

This scholarship helps shape who we are and, more importantly, who we become

It also opened up opportunities to improve my leadership and teamwork skills. In September 2016, I was on the organizing committee of SLX Ontario, a networking conference for the over 80 Schulich Leader Scholars across Ontario. This past year I served as Schulich Leader Captain at U of T, which gave me the chance to collaborate with two other Schulich Leader Captains at York and Dalhousie to help formulate a national Schulich Leader mentorship model that we plan to implement later this year.

What are your plans for next year?

This upcoming academic year, I plan to pursue an MSc degree in the Department of Laboratory Medicine and Pathobiology at the University of Toronto, studying cancer. Ultimately, it is my goal to become a clinician-scientist, researching immunotherapy in pancreatic oncology.

I’m very grateful to Seymour Schulich for establishing this scholarship program because it allows students from across the country to pursue studies in their chosen fields and develop their character and skills through the array of opportunities it offers. It helps shape who we are and, more importantly, who we become. This scholarship has helped me achieve my goals thus far, along with the support of my mother. Without them, none of this would have been possible.