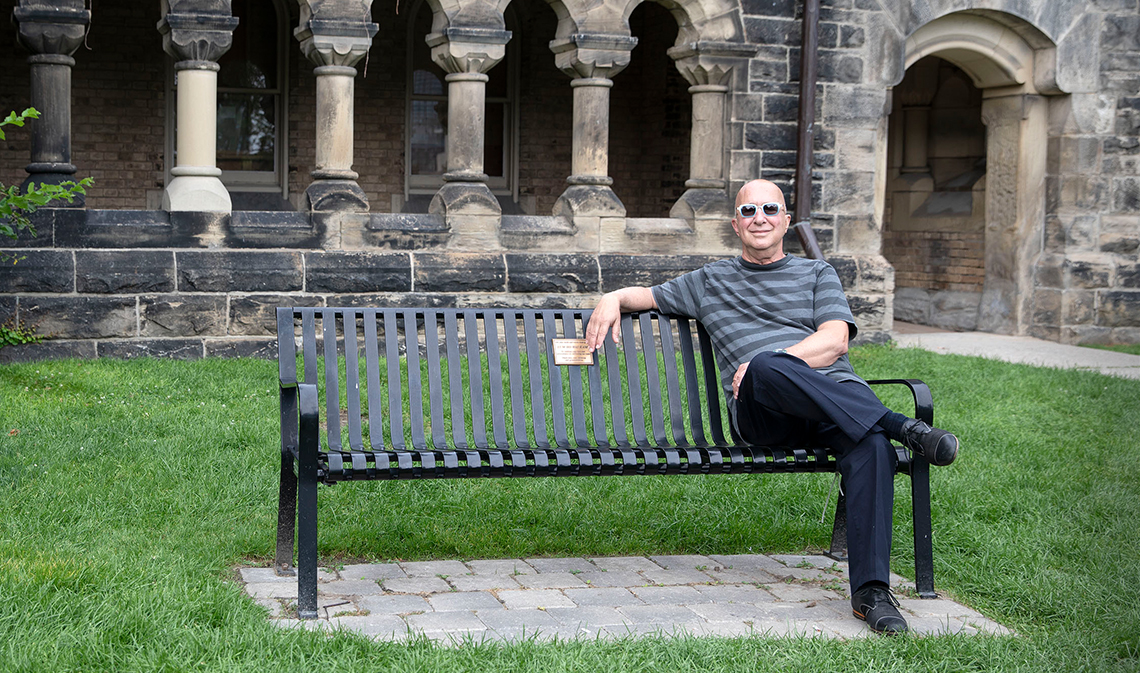 Paul Shaffer honours his parents with a Landmark Project bench

Paul Shaffer honours his parents with a Landmark Project bench

“That I was going to U of T was predetermined, preordained, and I didn’t question it,” says Paul Shaffer, former bandleader on The Late Show with David Letterman, whose father Bernard Shaffer (BA 1936 UC) was a student at University College in the 1930s.

“I knew U of T was a great school; it was his school. I was raised on stories about my father’s student days, his fraternity hijinks, performing in the UC Follies. He loved the place.”

For my dad, University College and Hart House were special places

For Shaffer, a commemorative Landmark Project bench situated in front of University College was a perfect opportunity to recognize the area on the St. George campus where he and his father each spent the majority of their time as U of T students.

“For my dad, University College and Hart House were special places,” says Shaffer. “For me, it was Sir Dan’s, where I was in residence for two years. So I wanted to recognize that part of the campus with this donation.”

Shaffer also wanted to honour his mother Shirley’s considerable influence on his life. “It would have been more obvious to just dedicate the bench to my dad since he was a U of T graduate,” he says. “But my mother was a Toronto girl. She was born and raised here, and she loved the city. It makes sense to me to include both of their names because the two of them were certainly partners in raising me and shaping who I’ve become.”

Launched in 2017, the Landmark Project campaign has garnered tremendous enthusiasm and support from the U of T community. “Our students, faculty and alumni are incredibly engaged and are supporting the Project in unprecedented numbers,” reports the project’s academic co-lead Professor Donald Ainslie, Principal of University College. “Every time I sketch out what we’re doing, almost immediately people get it. They agree an improvement on this scale is long overdue.”

Donors have resoundingly responded to the Landmark Project through recognition gifts, including commemorative benches and granite paving stones. These are opportunities to offer a unique tribute to a loved one, celebrate a milestone or honour an important memory of U of T.

“I thank my parents for instilling in me the importance of a good education,” Shaffer says. “I’m very appreciative that through the Landmark Project I’m getting the opportunity to honour my parents and all they did for me.”