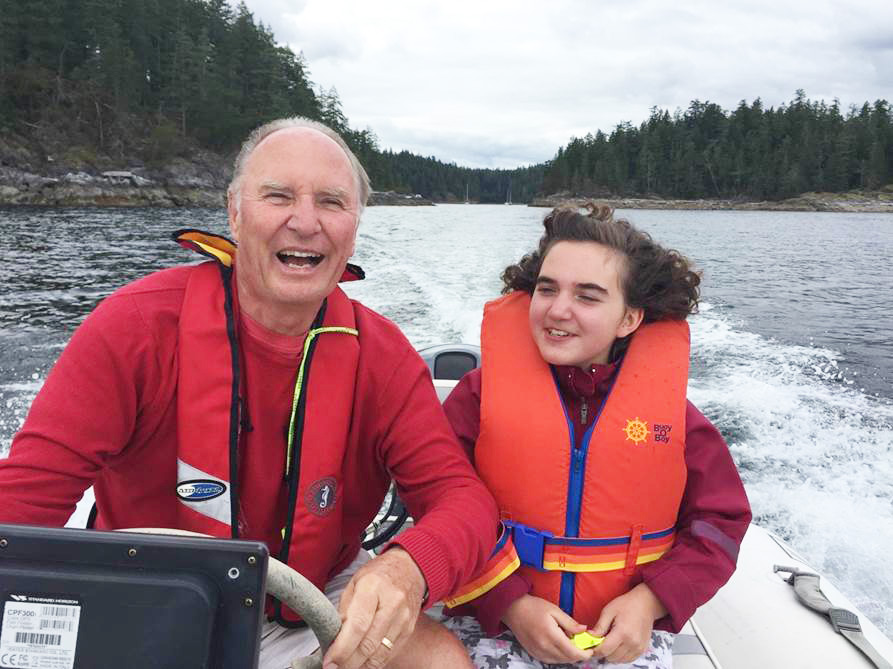 When retired educator and long-time charitable giving volunteer Bill Karny’s granddaughter Charlotte — originally diagnosed with autism — turned out at age eight to have a rare genetic neurodevelopmental disorder called Rett Syndrome, he was determined to find a cure. He desperately wanted to wipe away her delayed development, her seizures and her parents’ anxiety.

“I was going to fix it,” says Karny, who is vice-president of the Colonel Harland Sanders Charitable Organization (and president of the U.S.-based Colonel Harland Sanders Foundation). Terrence Donnelly, the Canadian organization’s president and the philanthropist behind U of T’s Donnelly Centre for Cellular and Biomolecular Research, heard about Charlotte’s diagnosis and decided to help. A strong supporter of the science driving health care forward, Donnelly is committed to improving lives.

“Everyone should have the opportunity to have a good life — a life free of disease, pain and discomfort,” says Donnelly.

Funding the fast and pragmatic approach to treating Rett Syndrome

Everyone should have the opportunity to have a life free of disease, pain and discomfort

While scientists determine root causes and investigate how to safely correct complex genetic conditions such as Rett Syndrome, Charlotte and others like her are struggling now. This urgency prompted Karny and Donnelly to opt for speed and pragmatism. The most immediate and strategic route emerged in the work of U of T and SickKids stem-cell researcher and Molecular Genetics Professor James Ellis, and a newly developed partnership with the University of California, San Diego. With a $1-million gift from the Colonel Harland Sanders Charitable Organization, Ellis and his colleagues are accelerating the search for drugs that could treat symptoms of Rett Syndrome — in an attempt to improve lives now, while the longer-term search for a cure continues.

As a genetic mutation on the X chromosome, it’s almost exclusive to girls as boys with Rett Syndrome don’t have a second X chromosome to protect them and typically die soon after birth. An estimated one in every 10,000 to 15,000 girls born worldwide suffer from Rett Syndrome.

The challenge of working with neurons

At three years old — after missing many developmental milestones — Charlotte was distant, almost non-communicative and would regularly yell and scream. She was diagnosed as autistic, and her parents, desperate to find specialized services for her, moved the family from Victoria, British Columbia, to Alberta. The verbal training, physiotherapy and other autism-focused therapies helped — Charlotte started to talk, became more stable on her feet, and more affectionate. When genetic testing showed she in fact had Rett Syndrome, the family wondered if this could enable an even more targeted intervention.

During this time, Ellis had been busy in his lab, using new stem-cell technology to grow neurons from Rett Syndrome patients’ cells. It took him close to two years to learn how to make these neurons, using induced pluripotent stem cells (iPSC) — cells with the remarkable ability to become any specialized cell in the body. Once created, the stem cells can be expanded in perpetuity and are proving a powerful tool in neuroscience research. Ellis teased out the deficits associated with Rett Syndrome in these neurons, and began testing a few drugs on them to see whether they had any effect.

“There would be no other way to do this testing in humans – to study these drugs in living brain cells,” says Ellis. “You can’t take a biopsy of the brain – you just can’t get at neurons in the same way you can blood or skin cells.”
Ellis’ first goal is to determine whether any current drugs on the market — already proven safe for use in human populations — could be effective in treating Rett Syndrome symptoms.

How collaboration speeds up drug discovery

But specialized equipment would speed up this work — a piece of equipment called a multi-Electrode Array would allow him to test close to 50 drugs simultaneously, and each at a faster rate. He also stood to benefit from collaboration with UC San Diego Professor Alysson Muotri, a stem-cell researcher currently using this technology for drug testing on neurons. This is where Karny and Donnelly stepped in. Karny learned about Ellis’ work, and even travelled to San Diego to meet Muotri, where he suggested the two researchers collaborate.

“This donation is now driving our work forward,” says Ellis. “Both in terms of securing the equipment, and also in setting up the collaboration with the team in San Diego. This way we’ll be able to share data, avoid duplication and move ahead even faster.”

For Charlotte, who is now 12 years old, a drug to manage symptoms could mean finally being able to ride a bike, or to stop waking up in the middle of the night to terrifying seizures. For her parents, and her loving grandfather, who are determined to keep her active and help her in every way they know how — it would provide relief and hope.

“We decided to stop trying to fix Charlotte, and started just trying to make her happy” says Karny. They do this by encouraging her to keep active — hiking and swimming, despite physical impairment — and by investing strategically in the science aimed at improving the quality of life of all Rett Syndrome patients.