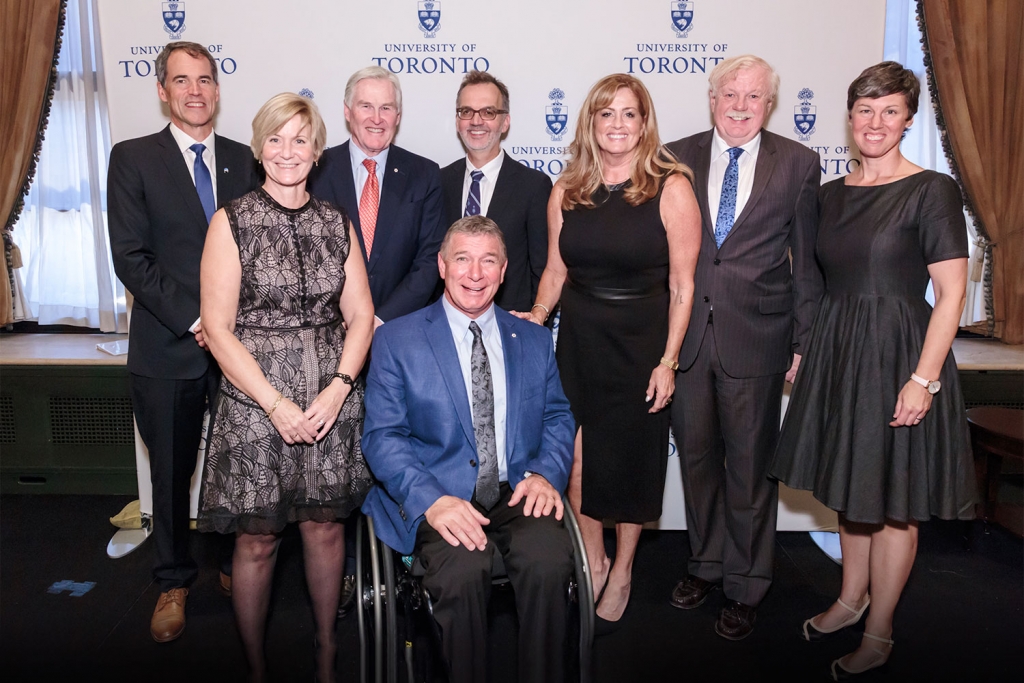 Rick Hansen’s nickname is “Man in Motion”—and a new gift made in his honour celebrates the U of T Department of Physical Therapy‘s drive for improvement. At the department’s 100th anniversary celebration, the Rick Hansen Institute and the Ontario Neurotrauma Foundation jointly announced a generous donation to support spinal cord injury research at the University of Toronto.

By supporting a two-year post-doctoral fellowship in spinal cord injury research, the donation will directly advance new understanding and improved clinical practices. The gift builds on long-time support by the donor organizations and advocates Rick and Amanda Hansen, who shared their own story at the celebration event. As Rick Hansen’s physical therapist for the Man in Motion tour, Amanda Hansen demonstrated the value of this field.

“Physical therapy at U of T has made major strides, not only in ensuring faster recovery but also in improving quality of life for people living with disabilities,” says Trevor Young, Dean of the Faculty of Medicine. “We’re so fortunate to have visionary supporters like the Rick Hansen Institute and the Ontario Neurotrauma Foundation helping drive this work forward.”

“There are probably few Canadians as knowledgeable about the state and direction of physical therapy in the 21st century as the Hansens,” says U of T Chancellor Michael Wilson. “There are also few Canadians as dedicated when it comes to advancing research in physical therapy. This critical initiative will go a long way in strengthening U of T’s position as a leader in the field.”

“Rick and Amanda started a movement that forever changed the lives of people living with spinal cord injury,” says Bill Barrable, CEO of the Rick Hansen Institute. “By envisioning a unified spinal cord injury research and care community, they also paved the way for partnerships, such as the one announced today, to come to fruition. We are honoured to work with the Ontario Neurotrauma Foundation and University of Toronto to support research that will have a positive impact on people with spinal cord injury.”

Paralympic gold medallist Rick Hansen inspired people around the world in the 1980s when he wheeled more than 40,000 kilometres with the support of his physical therapist, Amanda Reid (now Hansen), raising $26 million for spinal cord initiatives. It was the beginning of more than 30 years of support for physical therapy and spinal cord research through the Rick Hansen Institute, and of advocacy around creating inclusive communities for people with disabilities through the Rick Hansen Foundation.

“My life has been dramatically impacted in a positive way by many physical therapists,” he says. “Physical therapy is a vital discipline that improves physical function and enables individuals to maximize their potential. This research support will build on the department’s legacy and will continue to improve health outcomes for individuals with spinal cord injury.”

“I am very proud to be a physical therapist,” says Amanda Hansen, “especially at a time like this when such an extraordinary opportunity is being provided to inspire groundbreaking research in the area of spinal cord injury.”

A physiotherapist in Vancouver and formerly Rick’s physical therapist on the Man in Motion tour,Amanda Hansen has served as Director of the Rick Hansen School Program, as an honorary spokesperson and board member for Kids Help Phone (BC) and as co-host of the Children’s Miracle Network Telethon. She sits on the Rick Hansen Foundation board.

“This is another step in the right direction to ensure that Ontarians with neurotrauma, including spinal cord injuries, lead full, productive lives,” says Kent Bassett-Spiers, CEO of the Ontario Neurotrauma Foundation. “We are proud to partner with the Rick Hansen Institute and the University of Toronto on this fellowship and are pleased that it will be dedicated to two individuals who have contributed so much to improve the lives of those with spinal cord injury.”

The two-year fellowship will begin in 2018 and will support an early-career researcher. The gift comes just as the department celebrates its past, and looks forward to a bright future.

“We are so grateful to the Rick Hansen Institute and the Ontario Neurotrauma Foundation for investing in physical therapy research focused on spinal cord injury,” says Darlene Reid, Chair of the department. “U of T has an incredible history in this field. With the help of strong supporters, we can advance research, education and clinical involvement, and ultimately enhance clinical care — not only in Toronto, but across Canada and internationally.” Physical therapy in Canada can be traced back to U of T’s Hart House course in 1917 — a six-month training program launched by the Military Hospitals Commission for the many wounded veterans returning home from the First World War. New to the country, the practice of physical therapy combined medical gymnastics, massage, electrotherapy and muscle training.

The fellowship will be part of carrying this innovative spirit into the future, building healthier communities for people whose lives have been changed dramatically by injury —from improving individual physical function for more independent living to research into cures for spinal cord injuries.

How a travel grant built a more effective architect