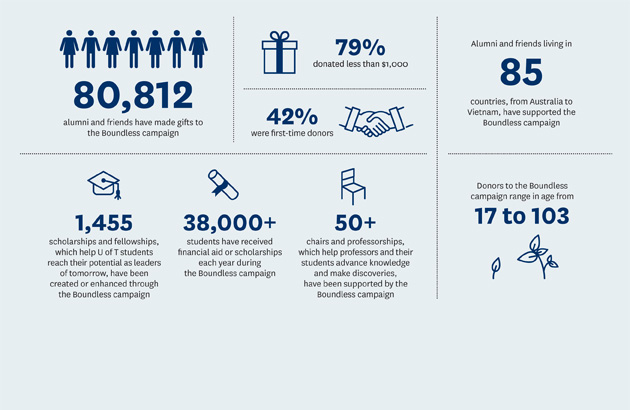 Boundless: The Campaign for the University of Toronto is setting a new benchmark for philanthropy in Canada. As the Boundless campaign progresses towards its $2-billion goal, the University extends its deepest thanks to the extraordinary generosity of more than 80,000 alumni and friends who have volunteered their time or made a gift. This outpouring of generosity from U of T alumni and friends is creating countless opportunities for students, contributing to important research discoveries and innovations that will create a better future in Ontario and Canada, and strengthening U of T’s standing among the best universities in the world.

Explore our infographic that shows the impact of the Boundless campaign

“The remarkable support we’ve received through the Boundless Campaign strengthens our commitment to both accessibility and excellence and fuels innovation and growth in priority areas. It provides a much-needed complement to funding from tuition and government that supports U of T’s core operations,” said U of T President, David Naylor.

To date, the campaign has raised $1.3 billion. This milestone achievement follows a record-breaking year in which the campaign raised $226 million, committed to new academic initiatives, scholarships and financial aid and capital projects across the University’s three campuses.

Over the course of the campaign, donors have helped U of T to establish 1,455 scholarships and fellowships for students, created more than 50 professorships and chairs, and begun more than 20 critically needed capital renewal projects. During this time, more than 120,000 guests have been welcomed at U of T events around the world. As last year’s record-setting results indicate, levels of giving have increased sharply since the campaign’s public phase began in November 2011. Volunteerism has also been on the rise; today more than 250 individuals are donating their most precious non-renewable resource – their time – to serve on campaign committees across the University’s three campuses.

John Cassaday, a 1981 U of T graduate and a member of the Boundless Campaign Executive Committee, says that reaching the $1.3 billion is a testament to those who have made U of T a priority in their philanthropy. “U of T has reached this important milestone because there are few other institutions whose impact and vision resonate so directly with individuals and organizations wishing to make a difference in the world.”

David Palmer, U of T’s Vice-President, Advancement says, “The strong global reputation of this University and the foundation of excellence on which it rests, could not have been built without the generosity of alumni and donors across many generations. While many critically important initiatives remain in our $2-billion campaign, we wish to express our abiding gratitude to our donors for the visionary support we have received to date.”