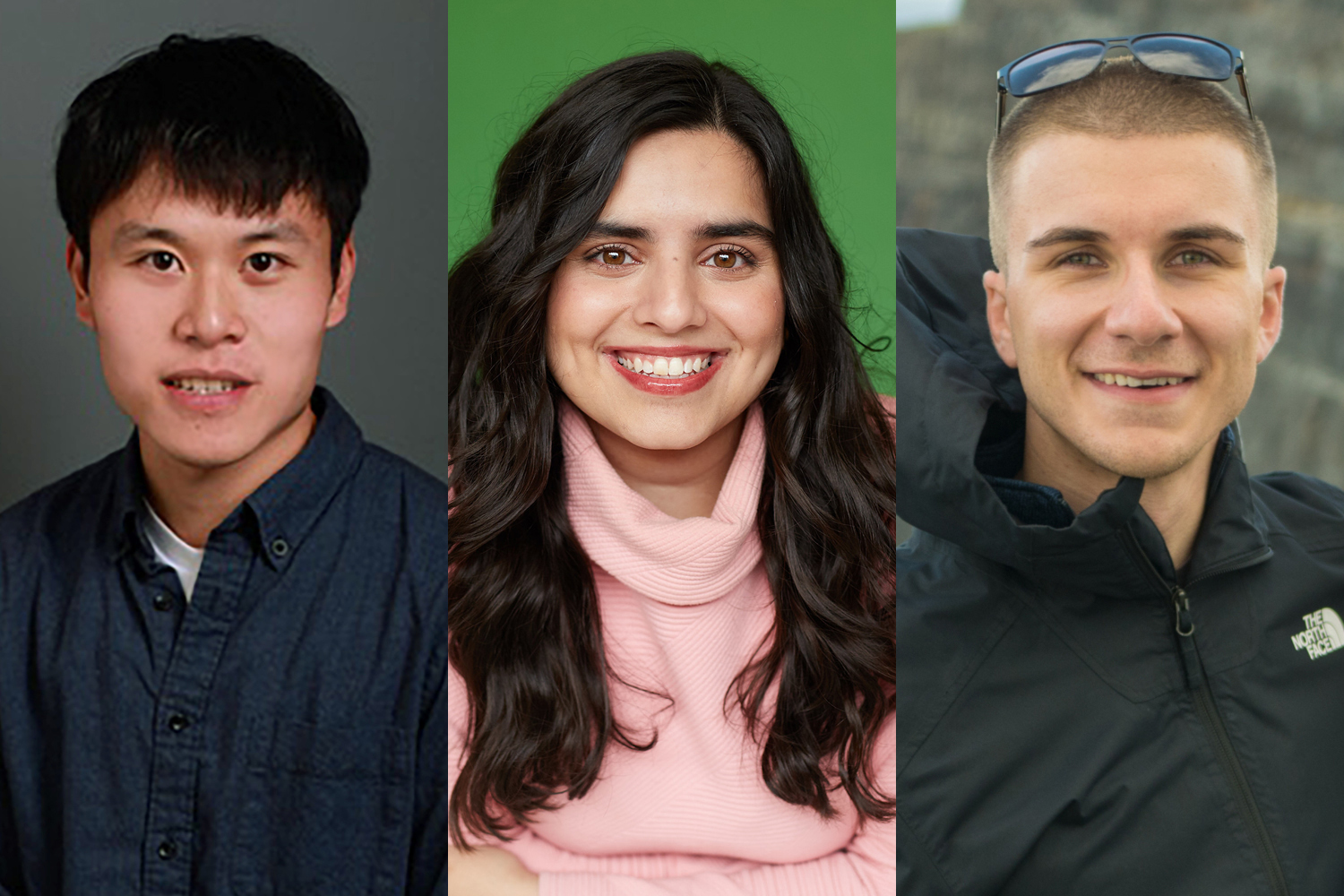 Will Kwan, an AI specialist and an entrepreneur, is spending his free time building open-source tools for genetics research. Haleema Khan, a graduate student in biomedical engineering, donates her digital artwork to raise funds for food banks. And Danny McInnis, a product design engineer, just filmed a documentary about resilience and small businesses surviving the pandemic.

Kwan, Khan and McInnis have a lot more in common than wonderful jobs and creative community projects. All three are Schulich Leaders, graduates of the University of Toronto and of the prestigious Schulich Leader Scholarship program for Canada’s top students in science, technology, engineering and math. All three credit the scholarship with giving them the same key to success: opportunities to take risks and spread their wings.

“Because the award alleviated the financial burden of paying for school,” explains McInnis, “it really let me try different things. That’s been instrumental in my learning. If I had been worried about working a job to pay for school, I would have been less inclined to take all those cool risks, and being able to has had a lasting impact on me.”

10 years of support for science, technology, engineering and math

Now celebrating their 10th anniversary, the Schulich Leader Scholarships have allowed hundreds of students to explore, thrive and make a difference. Founded by philanthropist Seymour Schulich through his Schulich Foundation, the four-year awards support Canadian university students with entrepreneurial aspirations rooted in the STEM disciplines: science, technology, engineering and mathematics.

THANK YOU FOR THE DIFFERENCE YOU’VE MADE, BY SUPPORTING CANADA’S NEXT GENERATION OF LEADING INNOVATORS AND PROBLEM-SOLVERS

After 10 years of growing the program, the Schulich Foundation now awards up to 100 scholarships per year. In 2021, 10 went to University of Toronto students. Valued at $80,000 for science, technology or mathematics students and $100,000 for engineering students, the awards also include membership in the growing Schulich Leaders Network of successful alumni—like Kwan, Khan and McInnis.

“Warmest congratulations to Seymour Schulich and the Schulich Foundation on the 10th anniversary of these very important scholarships,” says Meric Gertler, President of U of T. “And thank you for the difference you’ve made, by supporting Canada’s next generation of leading innovators and problem-solvers. The Schulich Leader Scholarships help ensure that our greatest young minds can take advantage of the opportunity of a stellar education, so they can realize their full potential.”

The Schulich Leader Scholarships program is graduating talented future leaders every year. The stories of Kwan, McInnis, and Khan illustrate three inspiring paths to success, and the tremendous potential embodied the program.

Will Kwan (BSc 2016 TRIN): The entrepreneur as explorer 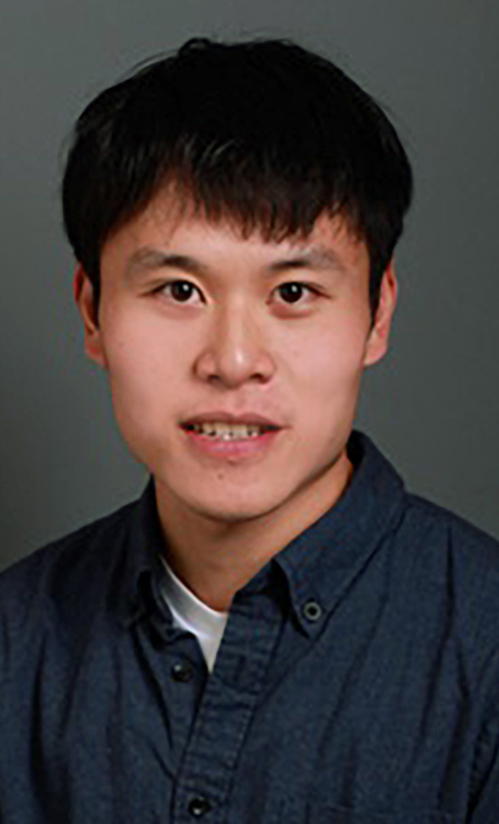 For Will Kwan, one of the first Schulich Leaders ever chosen, the opportunity to take risks has been key to his entrepreneurship journey. A member of the 2012-2013 cohort, he graduated in 2016 with a degree in computer science from Trinity College, and began launching startups even while still in school.

“The important thing about entrepreneurship is to just try lots of stuff,” says Kwan. “You have to have many shots to be successful. And that’s where having a scholarship really helps. Because you’re not always too worried about making money in the short-term, you can instead try to do riskier things. For example, the summer before my senior year I decided to work on one of my games.”

Knowing that the Schulich Leader Scholarship was supporting his studies, Kwan was able to channel both his time and his mental energy wholly into the project. Result? Frantic Architect was one of the most downloaded games on the App Store for several days.

As well as creating games, Kwan’s made videos, founded a hosting company and created another business to help consumers identify brand counterfeits. All in all, he’s launched half a dozen startups in the tech arena, with the biggest success being a service for gamers which he’s just sold.

The Schulich Leaders Network, he says, has helped him find a community of equals. “Everyone is very ambitious and very hard-working, and even though people are in many different fields, as you make friends you realize there are common traits that are shared across very high performing individuals.”

High performing definitely describes Kwan. He is currently incubating a new startup, while also working a new job with Google as a machine learning engineer. And of course, he’s still trying new stuff. “In my free time I’ve been helping the genetics research team at Google,” he says, “using machine learning to analyze DNA sequencing data. I just feel like I want to do something useful.”

In coding, says Kwan, innovation is deeply linked to this kind of constant exploration. “You don’t really have patents,” he explains, “you’re just building things, often with bits and pieces of software that other people wrote because that’s how you work more efficiently. But at the end of the day you have to put everything together yourself. So it’s very important to be constantly making a lot of stuff, and constantly improving it.” 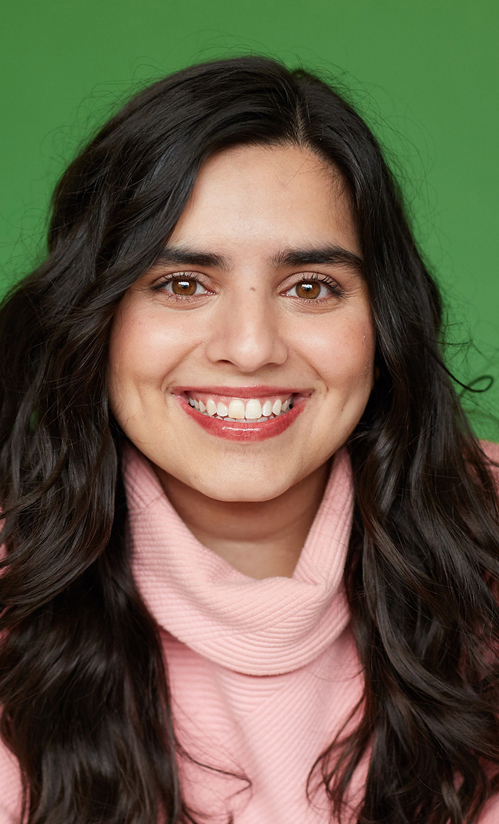 For Haleema Khan, the Schulich Leader Scholarship opened up opportunities to do research with top scholars. Entering U of T’s Victoria College with the 2015 cohort of Schulich Leaders, she graduated in 2020 with an honours bachelor of science degree in neuroscience and psychology.

“U of T is situated so close to some of the most cutting-edge life sciences and health-care facilities in Canada,” she says. “The proximity of all those really cool spaces opened up a lot of doors.” She learned the ins and outs of the research process in a psychology lab, spent a summer investigating infant cognition at Harvard, and discovered a love for bioengineering in a tissue engineering lab.

Now completing a master’s degree in biomedical engineering at McGill University, she’s developing a new type of rapid, super-accurate DNA testing for bacteria and viruses. Once the methodology is worked out, it could expand access to gold-standard testing—especially to remote or low-resource communities.

“I can combine the experimental side and the technology aspect to make a really high-impact product,” she says. “I think that tech is one of the ways that we can really forward our society.”

The Schulich Leader Scholarship has been a key part of Khan’s journey and she’s given back through contributing an interview for the 10th anniversary website. “I never thought I would be capable of achieving something like the scholarship,” she says, “so it really transformed how I valued myself. Once I did achieve it, there was nothing that wasn’t possible. One experience like that can really transform how you perceive your capabilities.”

She hopes to pass on that kind of support to others. A dedicated community volunteer, Khan is currently advocating for women and other underrepresented groups in STEM as VP Communication of the Society of Engineers at McGill. During the pandemic, she also launched a fundraising campaign, Creating for COVID, to help Toronto food banks meet increased demand. “For a donation, individuals would get a hand-drawn digital art piece,” she says. “I’ve always tried to find a way to have a positive impact. It’s so energizing, and it keeps me motivated to just do more and see a better community around me.” 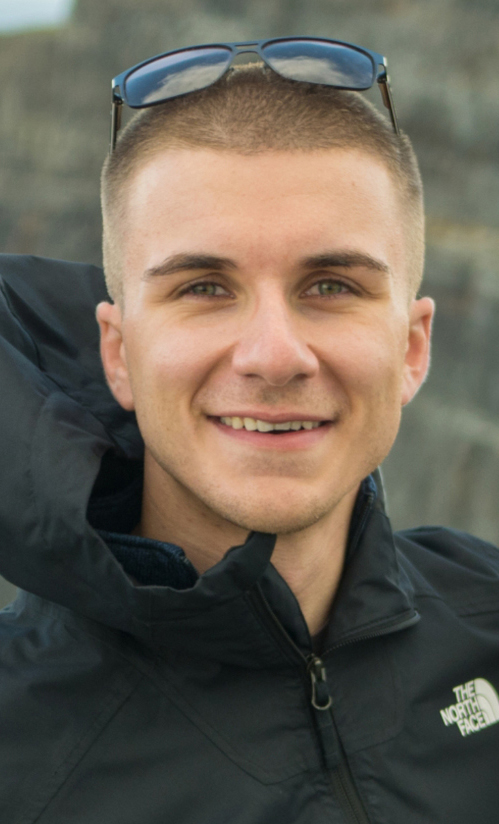 For Danny McInnis, being a Schulich Leader is about opportunities to develop—and exercise—creative and collaborative thinking. Entering U of T with the 2015 cohort of Schulich Leaders, McInnis completed a degree in mechanical and industrial engineering. Today, he’s working with Logitech in Ireland, in a job that “sits between engineering and design,” he explains. “The first product I worked on here, a minimalist keyboard, just got released, which was really exciting. I get to work on products for creatives like myself and gamers, too, which is super rewarding.”

At U of T, his opportunities to lead were tightly linked with opportunities to stretch his mind. It began with living in residence with students from 90 different countries. “You can imagine the range of experiences,” he says. “It was really, really cool.” He took leadership opportunities, first as a residence don and then as a team lead on the Hyperloop project, in which students create a pod to race in a vacuum tunnel. In both cases, he says, “I often found myself learning from the other students. It was cool, because the collective effort of a team of 40 versus just one person is hard to beat.”

Similarly, he appreciated the inspiration of the Schulich Leaders Network: like-minded friends doing amazing work. He’s mentored younger students and helped recruit companies to participate in the network’s job fairs. “Any way that I can help, I’m always happy to do it.”

McInnis holds patents for a concussion-prevention helmet and a robotic video control system, but he’s also shared an invention by making it open-source: a system for 3D printing low-cost custom prosthetics. “The part that I enjoyed the most was seeing the difference that it made for the five-year-old boy who tested our prototype,” he says. “We decked it out in a Spider-Man theme and you could just see him light up with excitement—it was probably one of my favourite memories from engineering.”

Impact and innovation are intertwined, says McInnis. “Making products that allow people to create and stay creative is really interesting to me.” He keeps his own mind nimble through filmmaking.

“When I moved out to Ireland I was looking for things to do. I’m a big boxing and martial arts fan, and I thought the traits that I see in professional fighters, like resilience and quick thinking, were very similar to the adaptability shown by businesses during Ireland’s strict lockdowns. Some of them had crazy ideas to keep their business afloat, but it was those ideas that saved them. It was a defensive move, that put them on offense—one of the many parallels to fighting. So I used my documentary to follow three pro fighters and three local business owners to show that maybe we aren’t so different after all!”

Schulich Leader Scholars are well on their way to huge impact

“Good leadership matters,” says David Goodman, Executive Director of Schulich Leader Scholarships. “The next generation of technology innovators will be game-changers, drawing on their skills, creativity and passion to create the solutions Canada needs to compete globally.”

A post shared by U of T Alumni (@uoftalumni)