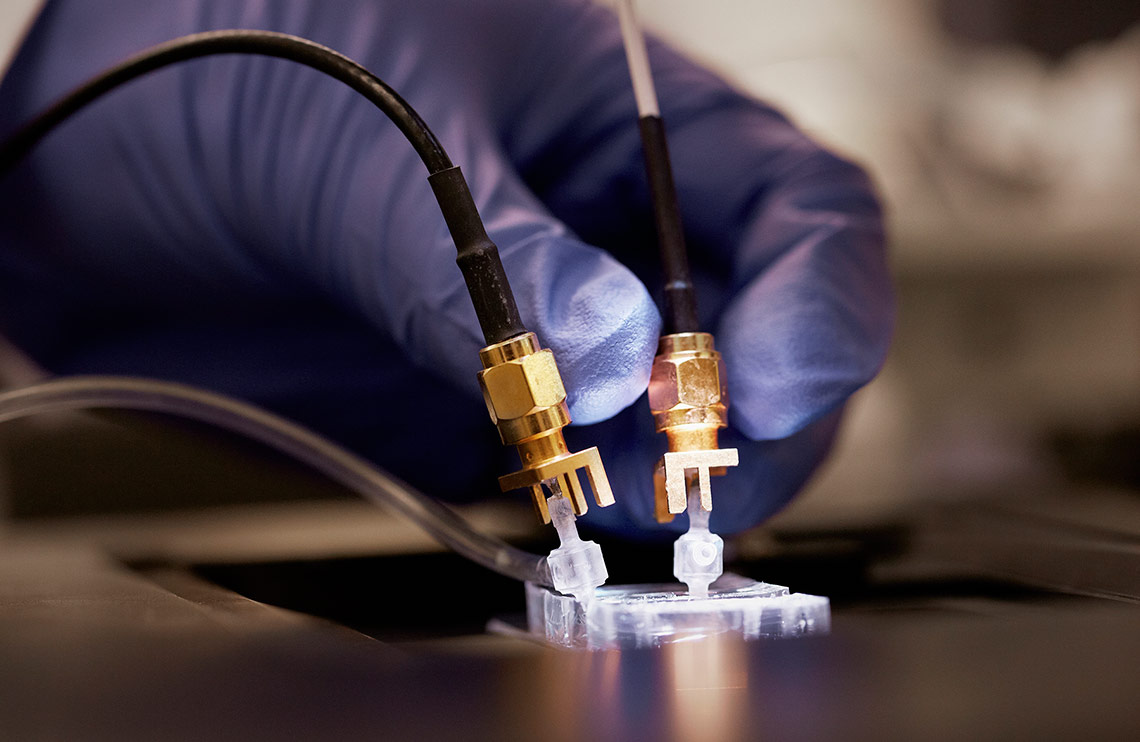 The professorships were created by a landmark bequest from the estate of alumnus Erwin Edward Hart (BASc 1940). The seven professors are all within the first 10 years of their careers and have demonstrated a high level of research excellence and exemplary graduate student mentorship.

“Our inaugural Hart Professors exemplify the richness and diversity of research and education across our Faculty,” says Cristina Amon, dean of the Faculty of Applied Science & Engineering. “They are addressing society’s most relevant challenges, from sustainable energy to human health, while nurturing the next generation of global engineering leaders.”

Professor Natalie Enright Jerger – Percy Edward Hart Professor in Electrical and Computer EngineeringProfessor Enright Jerger completed her PhD at the University of Wisconsin-Madison and joined U of T in 2009. She is an expert in computer architecture — the design and arrangement of components within a computer chip. Using computer models and simulations, Enright Jerger and her team test out new chip configurations and optimize them for computing speed, power usage, cost, size and a host of other parameters. In collaboration with companies such as Intel, AMD and Qualcomm, the team is is bringing about a new generation of more powerful computers, smartphones, tablets and other devices. In the last two years alone, Jerger has received the Professional Engineers Ontario Engineering Medal – Young Engineer, a Sloan Research Fellowship, and the Borg Early Career Award for outreach.

Professor Tobin Filleter – Erwin Edward Hart Professor in Mechanical and Industrial EngineeringProfessor Filleter is an expert on the mechanics of nanomaterials, especially as they relate to friction and wear, which cause premature damage to many mechanical structures. His team studies and tests ultrathin films, lubricants, and coatings that could be used in everything from automobiles to aircraft and even space systems. Some of these systems involve recently-discovered materials, including graphene and graphene oxide. Filleter completed his PhD at McGill University and joined U of T in 2012. In 2014, he received the I.W. Smith Award from the Canadian Society for Mechanical Engineering and in 2016, he received an Early Researcher Award from the Ontario Ministry of Research and Innovation.

Professor Philippe Lavoie – Percy Edward Hart Professor in Aerospace EngineeringWhat if there was a way to reduce fuel consumption, lower emissions, prevent noise pollution and improve the economics of the aircraft industry? Professor Lavoie, who is an expert in experimental fluid mechanics as applied to aerodynamics, hopes to make just these improvements as he and his team collaborate with manufacturers such as Bombardier and Airbus to incorporate innovations into the next generation of commercial aircraft. A main focus of his work is controlling the flow of air over the wings of aircraft using both passive systems and electromechanical actuators. These systems can reduce friction on the fuselage during cruising flight, enhance the lift force at take-off or otherwise optimize the performance of aircraft. Lavoie joined U of T in 2008 after completing his PhD at the University of Newcastle (Australia). He received an Early Researcher Award from the Ontario Ministry of Research and Innovation in 2010, and is the associate director (research) at the University of Toronto Institute for Aerospace Studies and associate director of the Centre for Research in Sustainable Aviation.

Professor Alison McGuigan – Erwin Edward Hart Professor in Chemical Engineering and Applied ChemistryAt U of T since 2009, Professor McGuigan specializes in developing systems to grow human tissues outside the body. These lab-grown tissues provide new ways to study human diseases, including cancer, and could serve as testing platforms for new drugs or other therapies. McGuigan and her team recently developed a way to grow cancer cells in an unrollable sheet, allowing for faster and more detailed analysis than previous culture methods. She received her PhD at the University of Toronto and completed postdoctoral research at Harvard University and Stanford University. In 2013, McGuigan received the Young Investigator Award from the Tissue Engineering International Regenerative Medicine Society.

Professor Daman Panesar – Erwin Edward Hart Professor in Civil EngineeringProfessor Panesar completed her PhD at McMaster University and has worked at U of T since 2008. Her research focuses on new ways to improve the performance of concrete structures, from bridges to buildings. Panesar and her team develop technologies that could extend the life of such structures, reduce environmental impacts or improve economic feasibility. Examples include the study of low carbon footprint materials, nano-cellulose fibers, industrial byproducts, supplementary cementing material and fillers on the durability performance of concrete as a result of coupled degradation mechanisms. In 2006 she received the P.L. Pratley Award from the Canadian Society of Civil Engineering and in 2012 she received an Early Researcher Award from the Ontario Ministry of Economic Development and Innovation. In the lab, he innovates new tools and techniques to study the biochemical mechanisms that underpin human cell function. These tools include organ-on-a-chip technology, advanced molecular imaging in living tissues, as well as the design of fluorescent molecular probes to measure the metabolic functioning of cells under the microscope. Rocheleau received his PhD from Western University and was a research assistant professor at Vanderbilt University before joining U of T in 2008. He serves as Associate Director of Research in U of T’s Institute of Biomaterials & Biomedical Engineering. Such materials could lower costs and reduce emissions from the transportation industry by enabling aircraft and other vehicle to be made from strong yet lightweight components. They could also advance sustainability by catalyzing the production of hydrogen for fuel, or the conversion of CO2 into useful chemical fuels such as methanol using sunlight. Singh received his PhD in Aerospace Engineering from Texas A&M University and conducted postdoctoral research at Cornell University before joining U of T in 2011. In 2016, he received an Early Researcher Award from the Ontario Ministry of Research and Innovation and in 2015, he was part of the U of T Solar Fuels team that won the Connaught Global Challenge Award.

Read how Erwin Edward Hart’s bequest will energize these researchers and their graduate students.