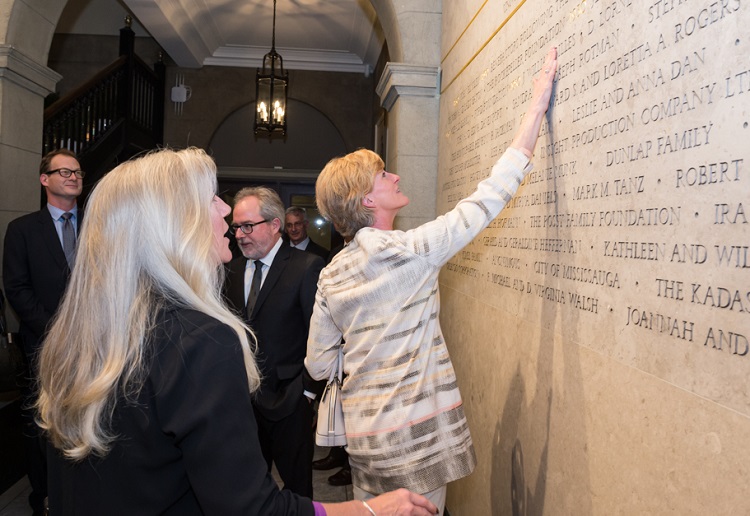 Philanthropy has long sustained the University of Toronto, and this year, U of T has established a special recognition society to honour that legacy.

The new Chancellors’ Circle of Benefactors honours those who have given $5 million or more—a history of support that stretches back to 1850 and the earliest days of the city of Toronto. The extraordinary contributions of these University-building donors include the original gift of land where the St. George campus stands today and more recent donations that are opening countless doors of opportunity for U of T students, fueling world-class research and funding transformative capital projects.

At its inauguration, the Chancellors’ Circle includes 97 donors, families and organizations—a community that will surely grow as more visionary donors step forward to support vital academic priorities across the University. This new society will also be a permanent legacy of the Boundless campaign, which has, since its launch, received gifts from more than 100,000 unique donors.

“There is no better place in Canada to make an impact on the world than at U of T,” says President Meric Gertler. “Generations of philanthropists—individuals, families and organizations—have helped transform our university into one of the world’s leading engines of knowledge production, innovation, creativity and social progress. We are extremely fortunate that so many prominent benefactors have played such a major role in supporting our core academic mission of research and higher education throughout our history.”

One example of such transformative philanthropy is the outpouring of support after the Great Fire of 1890 that destroyed much of University College. Restoration of the building and its library collection prompted donations from around the world, including a gift from Queen Victoria. Other historic philanthropic initiatives include the creation of Convocation Hall in 1907 and Hart House in 1919.

The Stewardship Task Force—a group of prominent volunteers that included former chairs of Governing Council, current and past chancellors and other long-time champions of the University—helped to develop the Chancellors’ Circle of Benefactors.

One member of the task force, Chancellor Michael Wilson, notes that members of the Chancellors’ Circle of Benefactors effect change not only through their contributions but also through their example and leadership. “Thanks in large part to the support of Chancellors’ Circle members, the brilliant people at U of T are better prepared to address the next, unexpected world challenges,” he says. “And combined, all of the University’s many thousands of donors are contributing to a foundation of success as U of T approaches its third century.”

“Philanthropy is an essential element of how we pursue excellence and innovation and is increasingly a key enabling feature of some of our most ambitious academic plans,” says David Palmer, U of T’s Vice-President, Advancement. “Donors play a central role in stimulating institutional creativity by lifting sights and inspiring our academic leaders to realize the change they are hoping to see in the world. When you look into our classrooms, labs, and across our three campuses, you can’t help but see the transformational impact of philanthropy.”

You can learn more about the outstanding donors who make up the Chancellors’ Circle of Benefactors by visiting chancellorscircle.utoronto.ca.