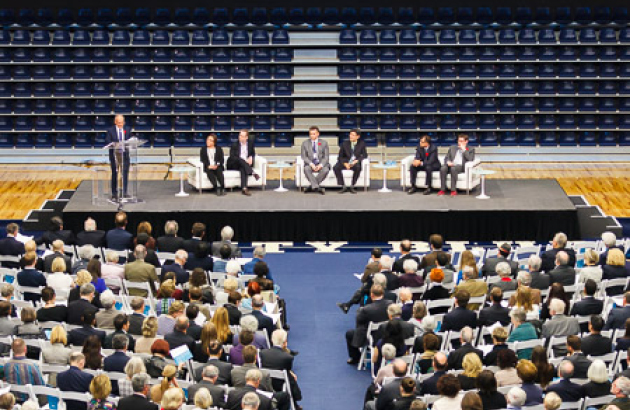 The event also featured a panel discussion between students, faculty, and alumni who exemplify the booming culture of innovation and entrepreneurship on U of T’s three campuses.

“The Boundless campaign, publicly launched just three years ago, is helping to open new horizons of exploration for our researchers while strengthening our ability to provide an excellent and accessible education for our students,” said U of T President Meric Gertler, who co-hosted the event along with Boundless campaign executive member, George Myhal and Chancellor Michael Wilson. “The vision, generosity, and commitment of many thousands of our alumni and friends has allowed U of T to look forward with increasing confidence as Canada’s leading institution of advanced research and research-intensive education, and as a great, global hub of learning and discovery.”

At the Goldring Centre event it was announced that the Boundless campaign had reached $1.594 billion in donations. However, that number was surpassed just a few days later, bringing the total amount raised to date to a remarkable $1.64 billion as of this writing. This occurs three years to the day since the public phase of the Boundless campaign was launched, totalling $674 million in 36 months, ahead of pace.

Campaign support has created 60 academic chairs, and created or enhanced 1,688 scholarships and fellowships. All told, more than 46,000 student scholarships and bursaries have been awarded each year during the Boundless campaign. As well, more than 22 capital projects across our three campuses have been built or are underway, including the Goldring Centre, a sport and exercise facility housing a 2,000-seat, internationally-rated field house for basketball, volleyball and other court sports, a state-of-the-art strength and conditioning centre, fitness studio, sport medicine clinic and research and teaching laboratories. The Centre was made possible through the generosity of the Goldring and Kimel families, and other donors.

The celebration event also focused on U of T’s track record as an innovation hub—over the past three years, the University of Toronto has launched more start-up companies than any other university in North America. The Boundless campaign is helping to foster innovation and entrepreneurship across virtually every division of the University – in both graduate and undergraduate classrooms; at incubators and hatcheries; through clubs and other networks; and by bringing luminaries to campus to act as mentors, advisors and investors. The latest addition to this group of campus-linked accelerators is a new program created by Campaign Executive member Francis Shen. You can read more about his $1 million gift to the University of Toronto Institute for Aerospace Studies here.

The evening’s panel discussion provided an opportunity for attendees to meet some of U of T’s brightest entrepreneurial stars and hear how innovation happens at U of T, and to learn about some of the ways that U of T entrepreneurs are contributing to greater economic and social prosperity, at home and around the globe. The panel included: Cynthia Goh, a professor in the Department of Chemistry and the Director of U of T’s Impact Centre; Alumnus Darren Anderson is the chief technology officer at Vive Crop Protection Inc., a company that has grown to 30 full-time employees in two centres in Toronto and one in Guelph; Stewart Aitchison, the Nortel Chair in Emerging Technology in the Department of Electrical and Computer Engineering; PhD student James Dou, the chief technology officer at ChipCare – a company he co-founded with his research adviser, Professor Aitchison; Ajay Agrawal, the Peter Munk Professor of Entrepreneurship at the Rotman School of Management and founder of the Creative Destruction Lab at the Rotman School; and Alumnus Karl Martin is President, CEO, and co-founder of Bionym – a new startup that has worked closely with the Creative Destruction Lab.