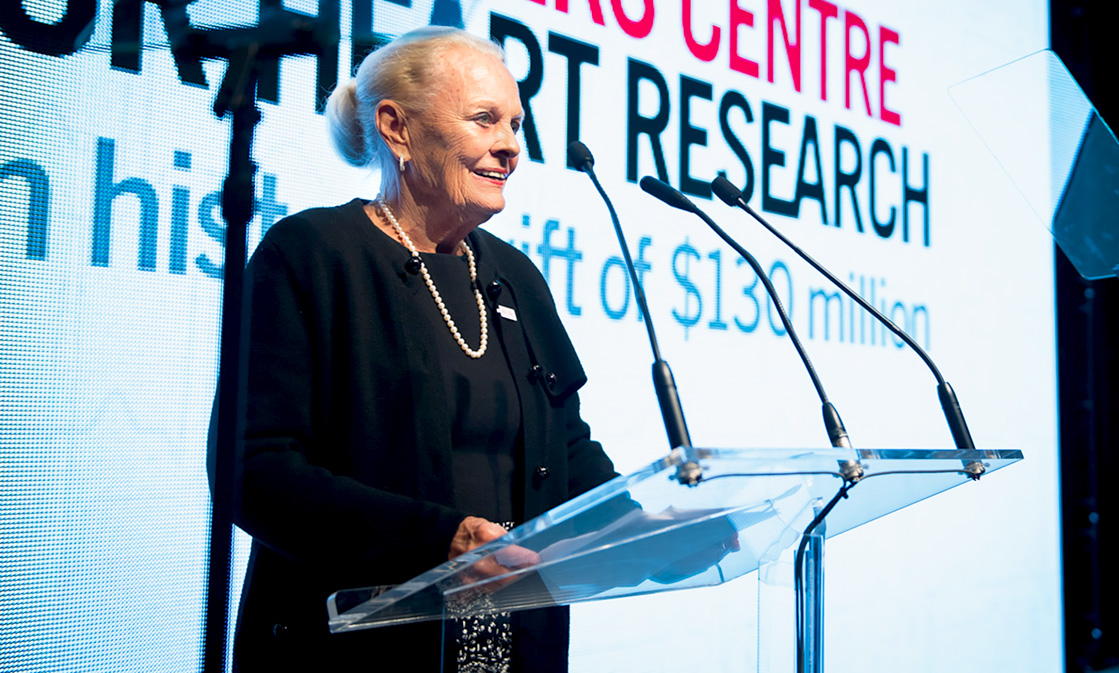 After listening to Craig Simmons’ recent talk on the groundbreaking pediatric heart research being conducted at the Ted Rogers Centre, a tearful mother of a child with a congenital heart defect approached engineering professor him to thank him for the work he and his colleagues are doing to find better treatments for her child. “That really touched me,” says Simmons, who is also scientific director of the translational biology and engineering program at the Ted Rogers Centre for Heart Research. These kinds of encounters with parents fuel Simmons’ quest to create “living tissue” heart valves that will replace defective ones in infants.

Cutting-edge tissue engineering is just one aspect of U of T’s contribution to the innovative partnership that animates the Ted Rogers Centre, which recently celebrated its second anniversary. More than 30 experts from Sick Kids, University Health Network and the University of Toronto are working together to and address heart failure across the lifespan and ultimately reduce hospitalizations for heart disease by half before 2025. “We know Ted would have been proud of this bold initiative that will improve heart health for all,” Loretta Rogers, wife of the late Ted Rogers, said at the time of the gift.

We tend to think of heart failure as an adult problem, but one in 100 Canadian babies are born with a congenital heart defect, which in some instances can be fatal. Currently an infant must undergo multiple surgeries to repair the defect—an initial surgery to repair or replace the defective valve and followed by additional operations as the child outgrows the device. Simmons’ “living tissue” heart valves would grow with the child, eliminating the need for subsequent surgeries. “The kids would still need that single operation,” Simmons says, “but then they’d never need another.” Nor would they require blood thinners or anti-rejection drugs, as the new valve would be made from the baby’s own cells.

Simmons’ research team harvests stem cells from a baby’s umbilical cord—typically discarded after birth—and attaches them to a polyurethane scaffold. Through chemical and mechanical stimulation—sort of like forcing the cells to do bodybuilding—the growing tissue becomes stronger and stiffer. Once the tissue is implanted, the scaffold should harmlessly biodegrade. Buoyed by early lab results, the team is now optimizing the processes for future animal testing.

Dr. Chris Calderone, surgeon-in-chief at Toronto’s Hospital for Sick Children and a professor in U of T’s department of surgery, is Simmons’ liaison in the clinical world. “This research could change the lifetime trajectory for some children, and also create a foundation for transferring the research findings to other valves in the heart,” he says.

The Ted Rogers Centre for Heart Research is a unique collaboration with each partner institution tackling a different piece of heart health puzzle: SickKids is advancing personalized medicine by decoding the genetics of cardiac disease; UHN is leveraging powerful databases to improve delivery of care; and U of T is developing stem cell and tissue engineering technology to regenerate damaged hearts. All three efforts are supported by the Rogers family donation, the largest monetary gift ever made to a Canadian health-care initiative.

Long-time supporters of the University, the Rogers family also made a landmark contribution to the Faculty of Applied Science & Engineering in 2000. The professorships, scholarships and programs created through their gift have helped lift the Edward S. Rogers Sr. Department of Electrical and Computer Engineering to become one of the top electrical engineering departments in North America.

BROWSE ALL NEWS
The next generation of engineering innovators
MORE NEWS