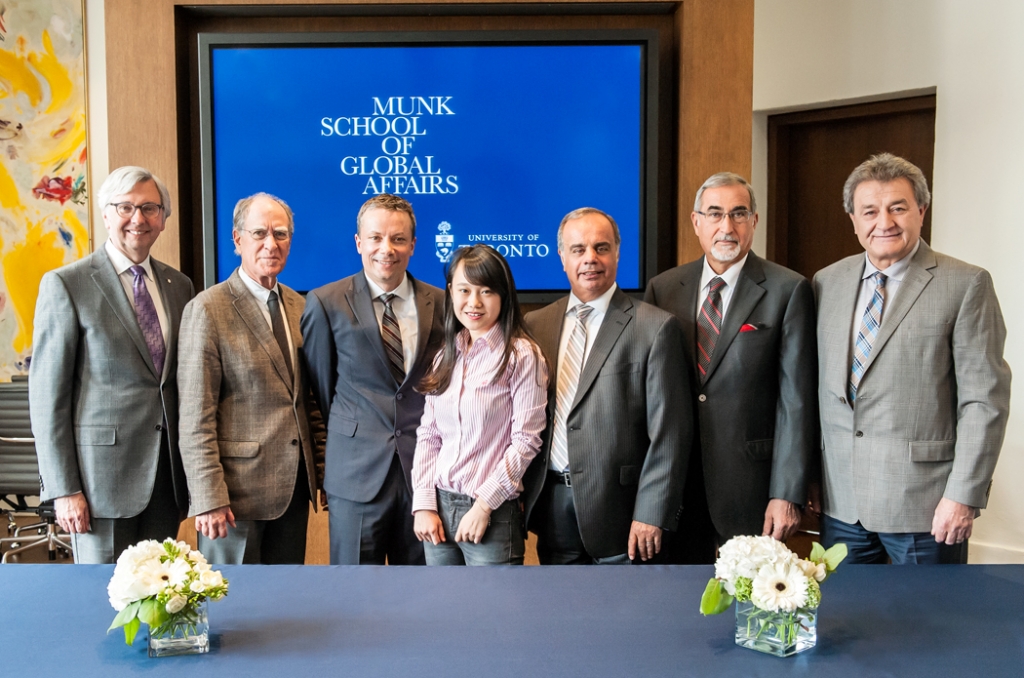 Greece has played key roles in global affairs for much of the past 100 years, influencing social and economic policy in Europe and becoming a microcosm of many of the world’s most pressing challenges. During the Second World War, in the Balkans, in the postwar turn to democracy and, now, within the European Union, understanding Hellenism was and still is essential to understanding large parts of the world.

With thriving Greek communities at U of T and in Toronto, the Munk School of Global Affairs is pleased to announce a new Hellenic Studies program that will build an understanding of Hellenism in Canada and overseas – a program that will also build bridges between Canada and Greece with the help of students who are obtaining first-hand knowledge of the country and its complexities.

At a celebratory event on April 28 at the Munk School of Global Affairs, the Hellenic Heritage Foundation committed to a $1.75 million endowment fund for the new program. The new courses will be housed in the Munk School’s Centre for European, Russian, and Eurasian Studies (CERES).

“Establishing an Hellenic Studies program is a milestone for the Munk School and U of T, as it provides the opportunity, in perpetuity, for students to study the Greek language, along with Greek history and politics and the importance of Greece in European affairs,” says Randall Hansen, director of CERES. “The Munk School and our students thank the Hellenic Heritage Foundation for this opportunity to deepen the world’s understanding of Hellenism.”

The Hellenic Heritage Foundation is a charitable organization with a mission to preserve, promote and advance Greek culture and heritage in Canada.

“The Foundation was established 20 years ago to make a difference in the lives of our community,” says its president, John Dagonas. “Establishing a fund for Hellenic Studies at U of T is doing just that. As Pericles once said, ‘What you leave behind is not what is engraved on stone monuments, but what is woven into the lives of others.’”

The Foundation had long hoped to see Modern Greek language courses restored at U of T after a decade-long absence. Excitement for the new Hellenic Studies program began in 2014, when U of T’s Greek Students’ Association helped to restore Greek language courses at the university, part of a three-year pilot project backed by the Foundation. The courses had one of the highest enrollment rates among North American universities. Also on offer were courses about contemporary Greek politics and Greece’s role in the Balkans and European Union.

Learning Greek is a cornerstone of the program now, but Hellenic Studies is also devoted to Greece’s history, culture, politics and current affairs – and the program gives students the chance to study in Greece.

“The program offers international opportunities, which is different from other programs of its kind in Canada,” says associate professor Robert Austin, coordinator of the program. “The past two academic years, for example, featured a new course that took place in Athens, Greece, plus this summer we added a five-week program in Thessaloniki, with trips throughout Greece,” he adds. “That kind of experience is unique to any undergraduate degree.”

Karolina Dejnicka, a second-year Master’s student at the Munk School, participated in the recent course in Athens. “Travelling to Greece showed me the disconnect between foreign media reports and what is actually happening on the ground in Athens,” she says. “My research project focused on the alarmist overtones of mass media in reporting Greek-Turkish relations, whereas sentiments are much more subdued within both of these countries.”

“The research trip was incredible,” adds Maria Alexiou, an undergraduate student who also participated. “Travelling to Athens with our professors and conducting interviews with politicians, NGOs, academics and government agencies was eye opening. It pushed me to rethink what I had read about Greece.”