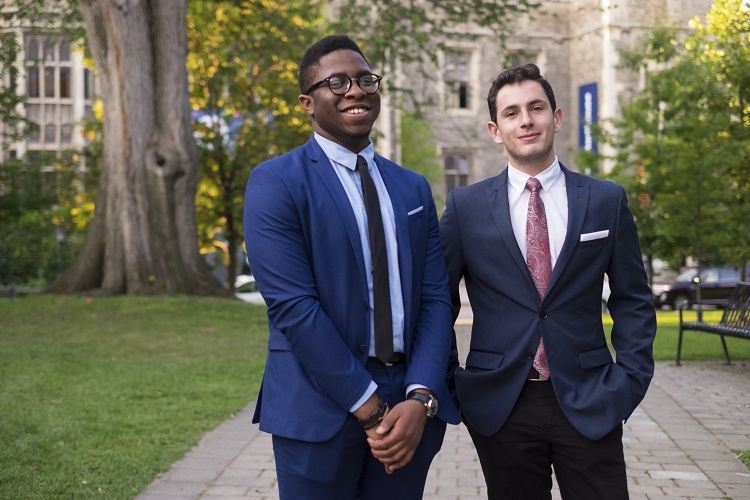 Pearson Scholarships bring 37 top international students to U of T

Pearson Scholarships bring 37 top international students to U of T

With interests from computer science and engineering, to life and social sciences, architectural design, and international development, the first cohort of 37 promising young minds are settling in to life at U of T across all three campuses.

An international outlook is an exciting Canadian legacy

Lester B. Pearson (BA 1919), who served as Prime Minister of Canada from 1963-1968, helped give Canada a distinct and respected role in the world as an international peacekeeper and safe haven. Naming the scholarship after this highly respected Prime Minister and U of T alumnus, the scholarship carries on his tradition of ensuring Canada’s international relevance and purview.

“Welcoming talented students from across the globe into the U of T community and our classrooms benefits everyone,” says President Meric Gertler. “Their life experiences and unique, international perspectives enhance classroom discussions, and the global networks of friendships that arise create exciting opportunities for domestic and international students alike.”

Philanthropic support for these prestigious scholarships is growing, giving a world-class education to international students who could not otherwise afford to attend U of T.

The Winkelman Pearson Scholarship: a Nigerian scholar falls in love with Canada

The Winkelman family made provisions in their estate to create the Wilma Winkelman Pearson Scholarship, awarded annually to a talented and promising student from Africa. Its first recipient is David Tobechukwu Halim, a student from Lagos, Nigeria. Halim says he “has fallen in love with Canada for its diversity, both culturally and geographically.”

It was also at the Westside Schools that Halim discovered his passion for both crunching data and writing. To Halim, being awarded the first Wilma Winkelman Pearson Scholarship means attending “one of the most prestigious universities in North America.” Halim adds, “I truly believe that the best version of me is one that will graduate from the University of Toronto, and I will forever be grateful for this opportunity.”

Peter Kadas (BA 1986 TRIN), a successful international financier and Director of the Kadas Prize Foundation, has likewise taken on a generous leadership role for the Pearson Scholarships. Mr. Kadas has created the Kadas Family Pearson Scholarship, awarded each year to a top student from Europe. Its first recipient is Francisco Sandoval Macias, from Murcia, Spain, who has come U of T to study math and physical sciences.

In addition to his main academic interest in mathematics, Sandoval also has a passion for theatre and advocates for the well-being of the LGBTQ+ community. On receiving the news he would be the first Kadas Family Pearson Scholar, Sandoval says, “I was shocked. It seemed as if all my dreams had become true.”