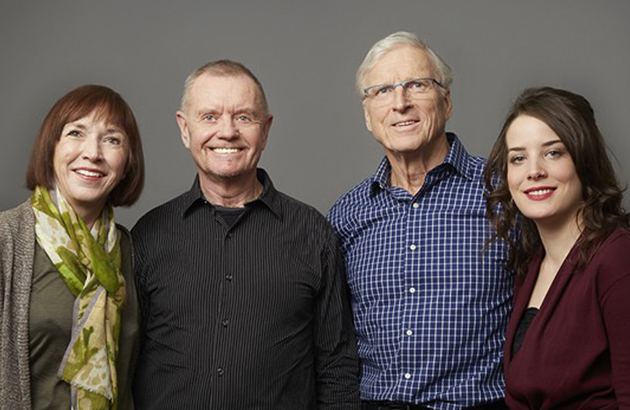 This spring, U of T’s Department of English celebrated the 10th anniversary of its Creative Writing Program with a nod to donors who have provided a record level of support to students.

“The donor support has allowed many students the means and the peace of mind to pursue their writing with more perfect focus,” says Professor Richard Greene, director of the Creative Writing Program. “The life of a writer is always in the garret but the help of generous donors allows them to achieve more in their degree programs and to enter the wider literary culture better prepared for the work that lies ahead and that much closer to the great books that we hope they will one day write.”

At this year’s gala, the 2014 recipient of the Adam Penn Gilders Scholarship in Creative Writing, Nicole Grimaldi, gave a reading of her work. But, unbeknownst to Carla, she preceded her reading by paying tribute to Adam with a reading of one of his poems.

“It’s an honour to have received the Adam Penn Gilders Scholarship, an award named for a truly talented writer, and the experience of meeting the donors—his family—has been wonderful,” says Grimaldi. “It has provided motivation and has quelled some of the anxiety that comes with taking creative risks, convincing me that those risks are well worth taking.”

Before his death from a brain tumour in 2007 at the age of 36, Adam wrote close to 200 stories, and his non-fiction and fiction was featured in The Paris Review and The Walrus. Carla, along with her husband, Chris Bartle, and Adam’s father, Clayton Gilders, established the award. Carla and Clayton have also included provisions in their wills to enhance the fund, which provides financial support each year to a graduate student following in Adam’s footsteps.

“As a young boy, Adam’s main love was skateboarding and his stated objective was to become a skateboard comedian. Much later he found creative fulfilment—if not financial fulfilment—through writing,” says Carla. “It is almost impossible to survive on freelance work; even his prizes at the National Magazine Awards did not bring monetary success. When Adam passed away, we wanted to find a way to honour his memory, contribute something meaningful and give his family and friends a way of turning their grief into something positive. We also understand all too well how hard it is for writers to make a living. That’s why we established a scholarship in his name.”

Dr. Richard Thain (BSc 1976 NEW, DDS 1980) is the lead donor behind the Henry Beissel Scholarship in Creative Writing. Beissel (BA 1958, MA 1960) is an English alumnus and award-winning poet and playwright who was the first-ever Norma Epstein Award for Creative Writing in 1958 at University of Toronto.

Beissel says it’s an honour to have a scholarship in his name and that he’s since become a donor to the award as a means of paying forward some of the generosity he’s received in his lifetime.

“I feel that it addresses a personal debt of sorts. I immigrated to Canada from Germany over 60 years ago, facing a new culture and language, and I was humbled at the welcome I received, particularly in the form of support that’s similar to this new scholarship,” he says.

Beissel received a U of T fellowship in addition to the Norma Epstein Award in Creative Writing. “The latter was an especially potent honour given that Northrop Frye was on the jury,” he says. “For me, this support served as an affirmation that I was a poet and also that I had become part of a country that valued art and culture. I believe that providing new generations of writers with the same sort of affirmation continues to be important, perhaps now more than ever.

“It seems that we often undervalue art and culture these days, and so I am moved by the idea that this scholarship will address that issue by encouraging young people to believe in themselves and the importance of creativity,” says Beissel. “I am grateful to have experienced the joy of writing throughout my life – of being able to deeply reflect on all life’s mysteries and contradictions – and so I am thrilled that this scholarship will allow me to share that wonderful experience with others.”