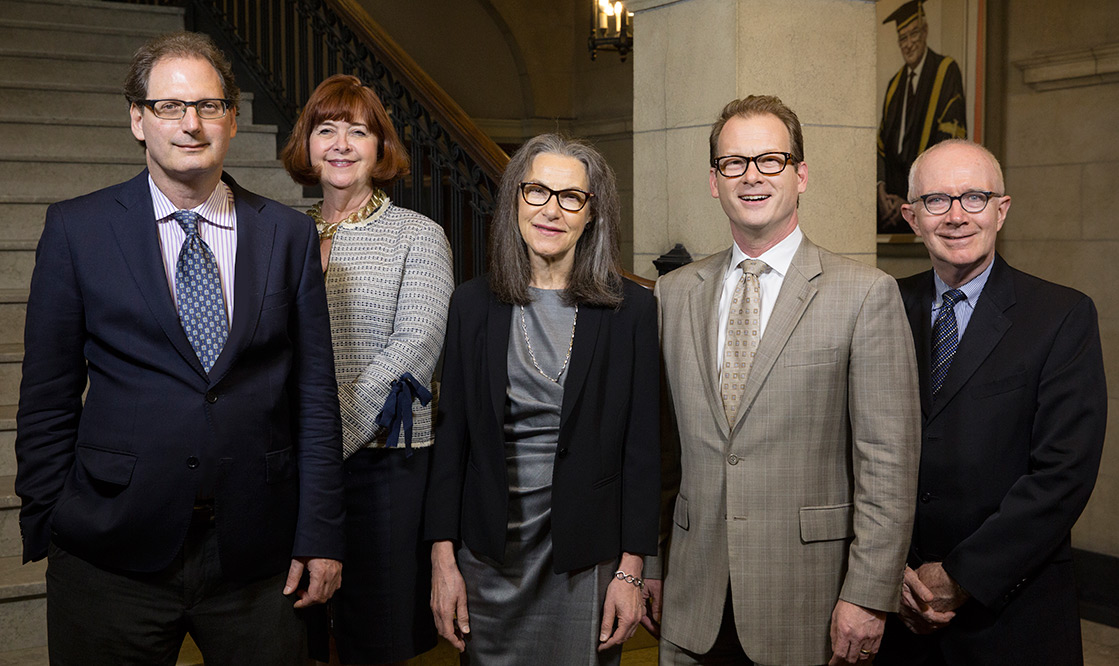 “I have a great affection for Canada,” says Irene R. Miller. The U of T alumna, who graduated with a degree in Food Sciences in 1974 and went on to a career in chemistry and business in the United States, feels fortunate that her work on the board of TD Bank brings her up north regularly.

And she’s not alone in her longing for the land of the maple leaf. “I think you’ll find that with the alumni,” she says. “We’re a diaspora, in a sense. Those of us who are living in America, we don’t forget our Canadian roots. The Associates facilitates that.”

Miller is talking about The Associates of the University of Toronto, a volunteer-run organization founded to help American alumni and friends stay connected with U of T, and, if they wish, make donations despite the complexities of international tax law. This year, the group is celebrating its 70th anniversary.

Simplifying charitable giving for American alumni and friends
“We remind Americans that Canada’s greatest university is doing good things for the United States,” says Paul Cadario (BASc 1973), the current chair of The Associates and a Distinguished Fellow at the Munk School of Global Affairs. Over the years, the group has endowed professorships in American studies and helped alumni support the research and educational goals close to their hearts—whether through ordinary gifts, bequests, employer matching programs, or even gifts in kind.

It simplified philanthropy for alumni and supporters based in the States

After the U.S.-Canada tax treaty was signed in 1980, the group was still necessary to help American corporations, foundations and non-alumni residents who wanted to give to the University of Toronto but required a US tax receipt. For example, The Associates helped Leonard Cohen, then resident in Los Angeles, donate 140 boxes of his papers to U of T Libraries. “Effectively, it simplified charitable philanthropy for U of T alumni and supporters based in the States,” says Cadario.

The Associates was extremely helpful to Miller and her husband, the late professor and investment manager Anoush Khoshkish. “We set up a foundation, the Miller Khoshkish Foundation, for estate planning and to help us think through our charitable giving,” says Miller. “Under the U.S. law, we can only give to 501C3 corporations. That’s why The Associates is extremely important.”

Miller and her husband have been able to endow three graduate scholarships at the University: two in chemistry, to honour their areas of academic interest, and one in music to honour their love of culture and Miller’s childhood orchestra rehearsals at U of T. “We were delighted to be able to do this,” she says. “It’s been a great thrill to meet the students, and to receive their letters explaining their work.”

The funds also established the Bissell-Heyd Associates Chair in American Studies, currently held by distinguished U of T Scarborough historian Rick Halpern. Cadario is enthusiastic about the impact of the Centre.

“They’ve had scholars across several disciplines,” he says, “not just politics and economics but the range of American studies in the broadest sense. Even before the founding of the Centre, the G8/G20 Research Group was established initially through the generosity of The Associates. It’s been wonderful to see what the University’s done with the money.”

Forging strong ties for the future

This expertise in American topics and these strong links with American friends and alumni are proving important as the University focuses on strengthening international research collaboration and attracting international students, one of President Meric Gertler’s Three Priorities.

U of T is receiving increasing support from international supporters who see the academic and research excellence at one of the top 25 ranked universities in the world as an ideal fit for their philanthropic priorities. More than half of U of T international research publications include American co-authors. And from May 2016 to May 2017, applications and admissions from students in the United States rose by 70 per cent. When these new students graduate, they will join the almost 24,000 U of T alumni who make up the University’s “diaspora” in the United States.

Perhaps some of them will even join The Associates—the entire board are volunteers, including Miller, who became the newest member this June. That makes the group extremely efficient as a charity, says Cadario, as it keeps administration expenses low. They are happy to serve, knowing the value of the cause. “If the University asks me to be a volunteer on something, I always say I’ll think about it,” he says, “but they know I’ll always say yes!” That’s a special relationship, indeed.