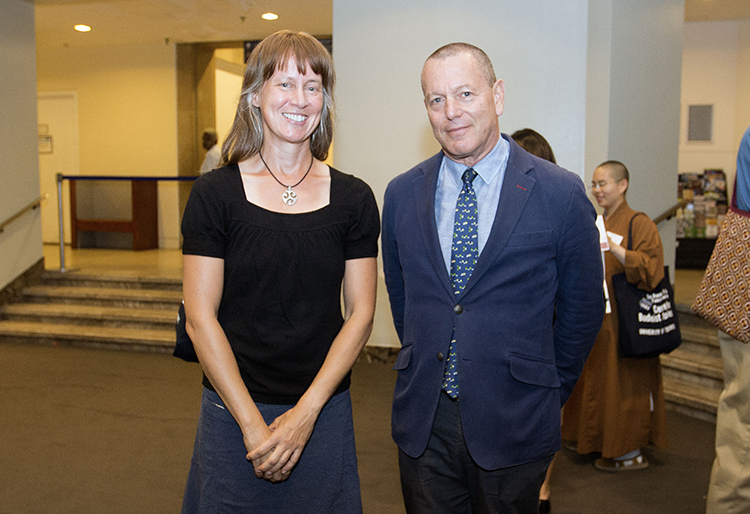 Still in its first months of operation, U of T’s newly minted Robert H. N. Ho Family Foundation Centre for Buddhist Studies is stepping confidently onto the world stage. A lively schedule of activities and scholarship is well underway, with the highlight of the year taking place August 20-25 on the St. George campus: the 18th Congress of the International Association of Buddhist Studies.

Both the Centre and the conference were made possible through generous grants from the Robert H. N. Ho Family Foundation, and they exemplify how the field of Buddhist Studies is experiencing exponential growth.

“These are significant and exciting developments,” says Prof. Frances Garrett, the Centre’s new director and the associate chair of the Department for the Study of Religion in U of T’s Faculty of Arts & Science. “It’s a distinction to be able to host the conference, the world’s premier gathering of academics working in Buddhist Studies. We’re so excited to share our Centre and Buddhist Studies at U of T with so many international scholars.” Academics from across the world attend the 18th Congress of the International Association of Buddhist Studies at U of T.
Photo by Jaclyn Shapiro.

An extraordinary gathering of scholars

The conference features 500 attendees from 35 countries, enjoying and giving almost 400 presentations. Most of the major scholars in the field will attend, says Christoph Emmrich, a professor in the Department for the Study of Religion and the conference organizer. Richard Salomon, president of the International Society of Buddhist Studies, will give the keynote address and other prominent speakers include Pāli language expert Oskar von Hinüber and philosopher Robert Sharf.

As hosts, U of T faculty and student researchers are contributing seven talks, and their work showcases the interdisciplinary range of the conference in a microcosm. For example, Emmrich will speak on how lists of ritual objects from a temple in Nepal shape understanding of the rituals themselves. Philosophy graduate student Sean Smith is giving a paper on how the Buddhist model of emotions is contributing to modern theories about how we process data mentally.

Other U of T scholars will present on topics such as manuscript marginalia, the development of uniquely Asian medical traditions, reconstructing early languages, and how political movements in Southeast Asia emerged from ascetic communities. Pauline Yu, president of the American Council of Learned Socieities, speaks at the conference opening roundtable: Bridging the Divide in Buddhist Studies. Seated: James A. Benn of McMaster University, Amanda Goodman of the University of Toronto and Juhyung Rhi of Seoul National University. Photo by Jaclyn Shapiro.

Taking the lead in an emerging field

The conference is about celebrating the growth of Buddhist Studies, says Emmrich. New universities have emerged in East Asia, South Asia and Southeast Asia, and the conference attendance has grown. “It shows that the field is really vibrant,” he says. “A lot of interest is generated by Buddhist Studies.”

Across the world, more and more private and public institutions are supporting scholars, endowing chairs, sponsoring conferences and research. While funding continues to flow to traditional and modern Buddhist institutions, such as temples, libraries and monasteries, interest in supporting academic studies has never been greater. The conference is part of this crossover between practitioners and scholars, as academics and monastics from around the world share their findings, analyses and thought.

In Canada, too, the number of academics in the field has increased exponentially over the last decade. “I am very happy and proud that U of T’s application to host the conference was accepted,” says Emmrich. “So many people who are producing fantastic work come from our university and across Canada. It’s an opportunity to show there is much more coming.” The Congress celebrates the growth of the field and the partnerships between U of T and Toronto’s Buddhist community.
Photo by Jaclyn Shapiro.

The Centre for Buddhist Studies and the conference have both been opportunities to strengthen the ties between U of T and the Toronto community, to the enrichment of both. The city’s Fo Guang Shan temple, for example, is sponsoring an evening session showcasing the scholarship done in their own monasteries, and the conference includes several evening sessions where the papers will be accessible to the general public.

Coming together, diversity, interconnectivity, is a theme that we’re very much living here in Toronto

Emmrich has noticed a trend for papers that look at Buddhism in the context of social networks—how early travellers carried cultural elements between countries, and how tourism today to view temples and pilgrimage sites continues to foster cross-cultural interaction and exchange. “The theme of coming together, diversity, interconnectivity, is a theme that we’re very much living here in Toronto,” he says.

The Centre itself has reached out to the community through events. A mini film festival focused on Buddhism and the environment attracted 100 attendees, and the University welcomed prominent Buddhist scholars as guest lecturers. A talk by Ogyen Trinley Dorje, the 17th Karmapa, head of an ancient order of Tibetan Buddhists, was attended by a crowd of 1,500.

And on campus, the Centre has become a lively hub of scholarship, hosting lectures, teas and rituals, and launching a project to catalogue its important multilingual book collection. Some funds helped hire undergraduates as research assistants to graduate students, supporting both groups and nurturing important mentoring relationships. New undergrad courses sponsored by the Centre introduced students to the global context of this world religion, and took a field group to Sikkim, India to research pilgrimage practices.

On the opening evening of the conference, the University hosted the Robert H. N. Ho Family Foundation and leading conference scholars in a gala reception at the ROM, celebrating the official launch of the Centre, with the invited guests strolling through the museum’s Buddhism-related galleries. In just one year, there is already much to celebrate. “We’re incredibly grateful to the Robert H. N. Ho Family Foundation,” says Emmrich.