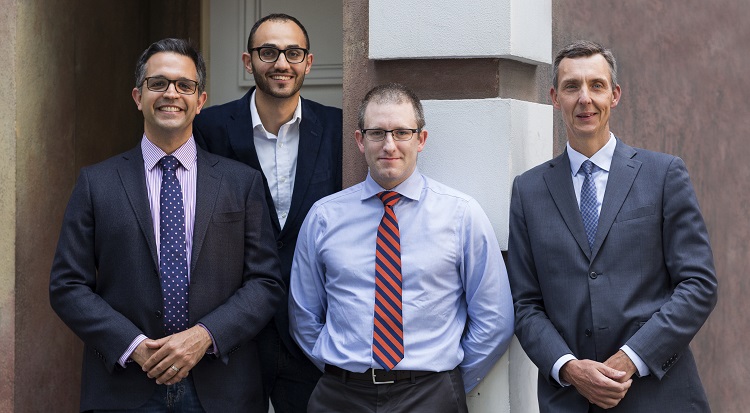 Dr. Mohammad Qadura is looking for a red flag—a biomarker that could help him predict a life-threatening disease of the blood vessels and head it off with preventive treatment. Thanks to a generous donation to U of T’s Division of Vascular Surgery, his ambitious research program is now in full swing.

The three recipients, Professors Mohammad Qadura, John Byrne and Ahmed Kayssi, will each receive funding for a five-year term. They are tackling some of the most difficult challenges related to blood vessels, including abdominal aortic aneurysms, peripheral arterial disease and limb preservation.

“To say that we’re extremely grateful is to underestimate the impact of this gift,” says Dr. Thomas L. Forbes, Chair of the Division of Vascular Surgery in the Department of Surgery. “The Blair Early-Career Professors have an opportunity to advance the care of patients that nobody else in the country has at this stage of their career. They have the stability that’s important for their academic work, and their findings can have a global impact. That opportunity would not be there without the support of Mr. Blair.”

The importance of investing in brilliant people and collaborative efforts

William Blair worked in the field of vascular disease throughout his career, supplying medical devices to hospitals across the country. Before his wife Vicky Blair passed away, the couple established a foundation, and have been long-time philanthropic supporters of the vascular surgery community.

“I have many friends in the community that have helped me tremendously,” Blair says. “I wish to honour them with this contribution. And I am proud to be able to do so.”

The concept is to invest in brilliant, dedicated people who represent the future

The gift dovetails with an earlier generous donation by Blair, who gave $150,000 in 2015 to establish the Blair Foundation Vascular Surgery Innovation Fund. One of these grants has already funded a test of new technologies for visualizing the inside of blood vessels. With the Blair Early-Career Professorships, he continues to support cutting-edge thinking and projects that leverage the power of U of T’s collaborative medical network.

“I wanted to provide opportunities for young leaders to continue to grow the specialty,” he says. “The concept is to invest in brilliant, dedicated people who represent the future of vascular surgery and research. In my career, I have seen true success come as a result of people working together for a common goal, so I felt that doing something collaborative was hugely important.”

Indeed, the gift will promote collaboration, agrees Forbes. “While the Blair Early-Career Professors pursue research, they will also strengthen relationships with U of T’s hospital partners by supporting work at each centre.” Dr. Mohammad Qadura’s research could prevent a life-threatening disease of the blood vessels.

Finding a way to predict the progression of peripheral arterial disease

Dr. Qadura’s research program shows this collaboration in action. An expert in peripheral arterial disease—blockages in the arteries of the arms or legs—he is on the hunt for a way to diagnose the most severe form of the condition early, in time to take preventive action.

Of the 10 million North Americans who are affected by peripheral arterial disease, five per cent progress to full-blown critical limb ischemia. Qadura’s research so far shows that these patients may have blood that thickens easily, building up in their blood vessels. A test for proteins related to coagulation could predict who is at risk, which could trigger medical treatment such as blood thinners to prevent the progression of the disease.

“We’ve built the first blood plasma biobank at St. Mike’s, thanks to Blair Foundation funding,” Qadura says. “We’ve recruited about 300 patients so far, both healthy and ill, and we’re preserving arterial tissue so we can examine what genes are being expressed in these arteries, and which proteins are being released into the blood.”

A solid time commitment and a wide research network are key

“We need a large patient population to prove that our test is reproducible and valid,” Qadura says. Since he now has research support for five years, he can plan to recruit the necessary thousands of patients across the full spectrum of the disease, from early to late stages, in all demographic groups.

He will also have the time to develop an effective screening test for other doctors to use. “Right now, we’re using mass spectrometry and very advanced genetic techniques,” he says. “We need to work with specialized engineers and chemists to develop a test for physicians who don’t have these complicated instruments – here in Canada, and eventually around the world.”

“The Division of Vascular Surgery has a unique structure: physicians spread across three main health science centres,” says Forbes. “This diversity is our strength; our impact can go above and beyond the corridors of one hospital—certainly a distinct advantage of investing in the University of Toronto. The research by the Blair professors will inform practice at all nine city hospitals affiliated with U of T, helping future patients across Toronto.

“Patient care is a priority for all of our surgeons. However, the impact of a successful operation, while very important, is limited to an individual patient and their loved ones. Research can impact standards of care, drive innovation and produce new knowledge and therapies that can be adopted worldwide — benefiting untold numbers of patients. We are very grateful to Mr. Blair for his visionary support.”

Leaving a mark on their alma mater