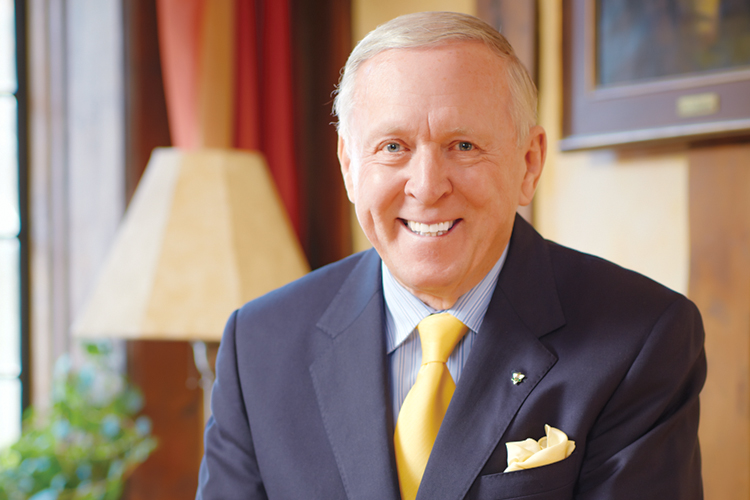 Terrence Donnelly has made a $10-million gift to fund basic science at U of T and create a “catalyst hub” for scientists at the Donnelly Centre for Cellular and Biomolecular Research. The donation is Donnelly’s third major commitment to U of T, and completes an arc of strategic giving that boosts U of T’s capacity and reputation as an international leader in research and teaching in health care and basic science.

Donnelly is one of U of T’s most generous donors, whose visionary philanthropy has had deep impact in the basic sciences. His initial investment commitment in 2002 helped build U of T’s Donnelly Centre for Cellular and Biomolecular Research, a 13-storey powerhouse of scientific discovery, with world-class researchers working at the intersection of biology, computer science, engineering, chemistry and pharmacy.

In 2011, he made another transformational gift to help build the Terrence Donnelly Health Sciences Complex at U of T Mississauga, which houses the Mississauga Academy of Medicine, and where 54 new undergraduate medical students are admitted every year, graduating 216 new doctors each cohort.

His latest gift to the Donnelly Centre follows his belief that fundamental research is the best way for researchers to work together from a variety of fields to decipher the biology behind the world’s most devastating diseases.

How funding basic research is key to eliminating disease

“We need basic research to eliminate disease,” says Donnelly. “To do that we have to have a constant stream of educated Canadians and people from around the world to keep pushing the envelope in research. That’s what led me to my third part of this gift.”

Good health is the greatest treasure anyone can have

Donnelly, 83, says he has been blessed with good health his whole life. “It’s the greatest treasure anyone can have,” he says. As a result, he has dedicated his philanthropy to helping those, who through no fault of their own, have not been fortunate to enjoy the same.

“This latest gift is to enhance the capacity of the Donnelly Centre to recruit top researchers from around the world, who have the ability to make a contribution in the struggle to eliminate diseases that plague mankind,” says Donnelly. “My goal is to try, with my limited resources and whatever time I have, to make a difference in the lives of people who do not have good health.”

Expanding research activity to stay on the leading edge

Brenda Andrews, the director of the Donnelly Centre, says Donnelly was also compelled to make this latest gift by the progress and success the Donnelly Centre has enjoyed over the past 10 years. “Donnelly Centre research has attracted a fair amount of attention from various private sector partners and biotech industries,” she says. “That success means that we are at a point where some of our platforms are mature enough that we need more room to accommodate even more research activity.”

Accordingly, Donnelly’s gift will help relocate some of the Donnelly Centre’s existing platforms and activities to a new space where they can forge even stronger links to industry. “This additional space will allow scientists from companies to intermingle with scientists from the academic side of the research program,” says Andrews. “This will help us catalyze innovation and provide our students with hands-on experience with the biotechnology sector.”

Donnelly’s gift will also establish a fund within the Donnelly Centre that the director can use – unrestricted – to support the top priorities of the Centre. Andrews says this is a remarkable aspect of the gift because it provides freedom for the Donnelly Centre and its scientists to decide what research directions it wants to follow. “This kind of funding, particularly in today’s granting environment, is something that will really help us stay at the leading edge of research and enhance our ability to attract the most sought-after trainees and scientists in the world.”

Those researchers are quite familiar with their benefactor. In fact, Donnelly knows nearly all of them by face, if not by name. That’s because Donnelly is a regular visitor to the Centre, avidly seeking out scientists and students to learn more about their research. “He’s an integral part of the centre, and he’s very interested in talking to any student, fellows, to find out what they’re doing,” says Andrews. “It’s very inspiring for the students and researchers to see his enthusiasm and interest in their research and in basic science.”

Donnelly says supporting research at the Donnelly Centre is the best investment he’s ever made in his life. “I am very proud of what the Donnelly Centre researchers have done in the past 10 years and excited about what they’ll do in the coming decades,” he says. “More research is needed to discover the causes of disease and to learn how we can prevent people from getting sick. Basic research is the only way we will be able to achieve this. I believe my investments will not only transform health care but inspire others who have the opportunity to do the same.”