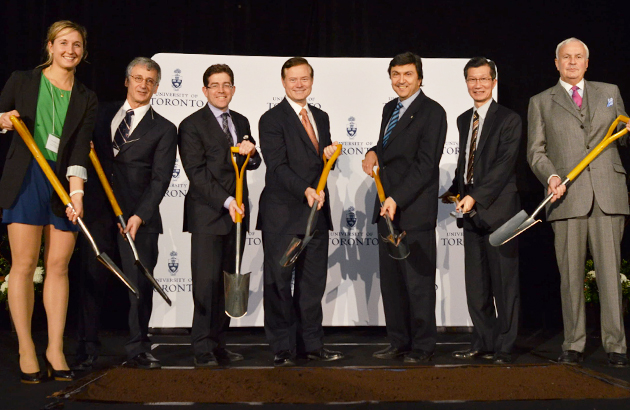 High performance athletes and U of T students will soon have a new state-of-the-art home to pursue excellence in sport and fitness, research, sport medicine, training and competition. Nearly 300 guests turned out at the Varsity Centre dome to celebrate the groundbreaking ceremony for the Goldring Centre for High Performance Sport, slated to open in January 2015—the same year the Pam Am Games come to Toronto. The sports institute is the feather in the cap of the $98-million Varsity Centre complex, which also includes the recently built 5,000-seat stadium with 400m eight-lane track and an artificial turf field (domed for winter use), and the existing 4,000-seat arena.

The Goldring Centre would have remained a dream without the dedication and commitment of many generous benefactors, beginning with the catalytic naming donation from the Goldring family, initiated by the late Warren Goldring (BA 1949 UC, LLD Hon. 2003), and continued by his children Blake Goldring (BA 1981 VIC) and Judy Goldring (BA 1988 VIC). Ron Kimel (BA 1966 UC) and the Kimel family, together with the Province of Ontario, also made remarkably generous gifts and grants that enabled the project to proceed. Together, these and other donors have contributed $51 million toward the $58-million goal for the Centre.

The groundbreaking ceremony also noted the generous contributions of the late A. Gordon Stollery (MSc 1972) donor to the Faculties of Arts & Science and Kinesiology and Physical Education, and until his untimely passing in December, the Chair of the Goldring Centre campaign. Stollery was represented at the ceremony by his daughters Tori, Lindsay and Cailey Stollery, who spoke to their father’s commitment and passion for (and own impressive accomplishments in) high performance sport. Stollery will be succeeded in the role of campaign chair by Honorary Lieutenant-Colonel Kevin Reed, who will oversee the final push toward the finish line.

“We are so grateful for the initiative and foresight of the Goldring family, who kick-started the project with their generous lead gift,” says Professor Ira Jacobs, dean of the Faculty of Kinesiology and Physical Education, under whose jurisdiction the Goldring Centre will reside. “Their support, together with the generosity of the Kimel and Stollery families and the investment by the Province of Ontario, will help create a magnificent legacy in the decades to come for scores of athletes, coaches, researchers, students, and the greater community.”

The Goldring Centre will house the Kimel Family Field House featuring international-level basketball and volleyball courts, a relocated and expanded David L. MacIntosh Sport Medicine Clinic, a range of sport and exercise research labs, and a strength and fitness centre accessible to all U of T students. It will also be a place where U of T’s growing list of key partners – including the Canadian Sport Centre Ontario, Swim Canada and the Ministry of Health Promotion and Sport – can converge in support of the region’s top athletes.

“The Goldring Centre will build upon a proud tradition at the University of Toronto—a culture of fostering and nurturing innovation and of creating and sharing knowledge,” says President David Naylor. “The result will be dramatic breakthroughs in many disciplines, a pool of remarkably talented graduates, a growing number of new products and services, and not least, we hope, many proud spots for Canadian athletes on podiums around the world.”