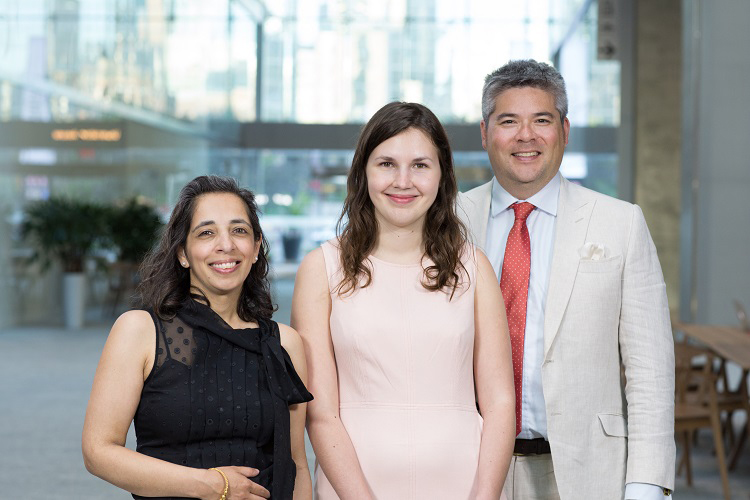 When Dr. Angela Jerath and her husband Jason Wong decided to marry, they opted out of a traditional wedding registry. Instead, the young couple asked guests to contribute to building a legacy to honour two important women in Jerath’s life: her grandmother and mother.

Jerath, an assistant professor in the Faculty of Medicine’s Department of Anesthesia, wanted to set up a scholarship that would pay homage to the influence that her late grandmother, Zhora Khanum (nee Imam) and her mother, Santosh Kumari Jerath (who is still living), had on her life and career.

“Each of these women were incredible role models for me,” she says. “They passed on knowledge and important values such following your dreams and working as hard as possible.”

In fact, Jerath credits her grandmother as her inspiration to pursue a medical career. “She instilled in me the belief that I could do anything I set my mind to. She believed that no one or no one circumstance should stand in the way of a person receiving an education, no matter the odds.”

Jerath recalls how her grandmother regularly counselled young women and men in her native Pakistan, teaching them to follow their dreams. She also believed in supporting her community during times of crisis, providing not only her wise counsel, but financial help to people during difficult periods in their lives.

“Whether it was a flood or family crisis, my grandmother dedicated herself to the needs of others,” says Jerath. She was driven by her role in the All Pakistan Women’s Association (APWA) which promoted social, educational and cultural programs in Pakistan. “She was a spiritual, progressive, modern and charismatic woman; you could say ahead of her time.”

Jerath’s mother, Santosh Kumari Jerath, also held education in high regard. A graduate of Punjab University in India, she came from an era in which there were few female university graduates. After graduation, she built a career in a teacher training college in Pakistan, educating the next generation of teachers.

How generous wedding guests made the gift possible

When it came time for Jerath to plan her wedding to Wong – who also established an award in his parents’ names at University College – the couple decided to forgo traditional gifts. “You could say we traded blenders for boundless opportunities; to leave something meaningful in the world to commemorate our wedding,” says Jerath. As a medical student, she received scholarships to help her complete her degree. “I wouldn’t be where I am today without the generosity of donors,” she says.

You could say we traded blenders for boundless opportunities; to leave something meaningful in the world

The couple were thrilled that more than 50 wedding guests contributed to the award as their gift to the couple. Student Alison Brandon was the first recipient of The Zhora Khanum (Imam) and Santosh Kumari Jerath Award.

Through the Boundless Promise program, U of T will match in perpetuity the annual income generated by new endowed donations of $25,000 and up, which are designated toward undergraduate needs-based financial awards. The Boundless Promise program is an exciting opportunity for donors like Jerath and Wong to double their impact in support of the next generation of global citizens.

“We feel so fortunate to have had such wonderful mentors in our life and honour them in perpetuity with this award,” says Jerath. In addition to establishing the endowed award, Jerath and Wong also confirmed a bequest to the Faculty of Medicine to support the award.