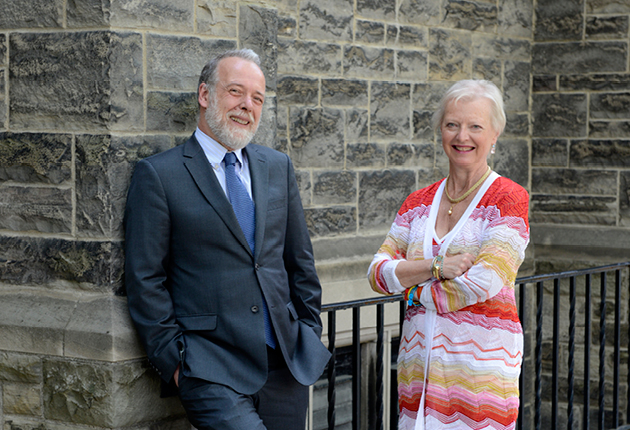 Steacy, who graduated from Trinity in 1976 with an Honours degree in English, donated $1.5 million to establish two new streams in the Margaret MacMillan Trinity One program, and to fund a writing program for science students. The programs will be launched this fall. Based on the expected success of the first 10 years, Steacy is committed to ensuring a trust of $4 million to support the programs. The gift was announced by interim Provost Porf. Michael Ratcliffe at the Graduation Awards ceremony on June 16.

Steacy said in an interview that “after five brain surgeries, I needed to nail down my legacy” by giving back to Trinity. After an emergency craniotomy for metastatic melanoma in 2011 and the radiation therapy that followed she not only started thinking about her legacy but was prompted to get married to her partner, Brian Gable, an award-winning cartoonist with the Globe and Mail.
“I had always intended to include Trinity in my will,” she said, “but I approached the college in February, 2013 with an indistinct idea of what I wanted to accomplish with my legacy, with the intent, however, to do something special and unusual.”

In September, 2013 she met with Prof. Ratcliffe to discuss the writing program and adding the two brand new science streams to the Trinity One program. “It was at that meeting that I was able to encapsulate what I wanted to leave to survive me: a program that would allow students to have the pleasure and satisfaction of engaging both sides of the brain at the same time. That is my definition of science writing.”

The Anne Steacy Biomedical Health Stream will provide students with a look at how science is executed and interpreted to provide new insights into the scientific process. The Anne Steacy Health Science and Society stream is designed to provide students with insights into ways scientific discovery impacts on society and how society perceives global health and public policy.

The Anne Steacy Program in Science Writing has two components. One is writing for non-scientific audiences, the kind of writing Steacy did for Maclean’s Magazine in the 1980s. The second component is writing for scientific journals and for delivering information at conferences.

Prof. Ratcliffe said “I am truly excited to see this program become a reality thanks to Anne’s visionary gift. While the Trinity One program has been an incredible success for our arts students, there has been a significant gap in programming for science, and especially life science students, who account for nearly 35 per cent of undergraduates at Trinity.”

The Margaret MacMillan Trinity One program was established in 2005 to offer discussion-based seminar courses to first-year students. Only 25 students are admitted to each academic stream, promoting deep discussion and interaction between students and facilitating mentorship that faculty can provide to these outstanding students. This is an exceptional opportunity for science students entering the University of Toronto, where first year classes can have up to 1,500 students.

Prof. John Duncan, interim director of the Trinity One program, said it “not only provides opportunities for students in their respective disciplines, it offers co-curricular cross pollination. For students in the International Relations stream, the perspective and expertise of a student studying biomedical health could open up so many other modes of viewing a particular issue.”

Steacy’s parents were scientists, and she found science writing fascinating as well as calming. Her father’s father, Colonel the Reverend R.H. Steacy, graduated in divinity from Trinity in 1899 and went on to found the first Canadian chaplaincy service in the First World War. A collection of artifacts from Colonel Steacy’s time in the chaplaincy service, donated by Ms. Steacy to the College, was on display at the June 16 ceremony.

While her mother went to McGill and her father went to Queen’s University, she chose U of T and Trinity because of her grandfather’s connection here, and because she had already spent seven years in Toronto as a boarder at Havergal College and “it (U of T) felt like home.”

Three of her surgeries required a cage with four pins penetrating through the scalp to keep her head immobile. She said she plans to do art projects based on the cage as well as the mask she had to wear for radiation. Her latest tests show that her condition is stable.

After the first of two craniotomies, she and Gable established the Steacy-Gable Neuro-Oncology Research Fund at University Health Network in late 2011 to finance the research “of one particular neurosurgeon who saved my life – Dr. Gelareh Zadeh.” Dr. Zadeh is a 2006 graduate of U of T and has been named one of the top three trailblazers in her field in North America.

Prof. Leslie Boehm, an adjunct lecturer at U of T’s Institute of Health Policy, Management and Evaluation and an associate of the School of Graduate Studies, said Steacy’s leadership and understanding of health policy is remarkable. “It is clear that the public health system must continue to evolve and that Canada will benefit from leaders who understand the relationship between health, health care and how this fits with broad public policy.”

The new writing program evolved from Steacy’s conversations with Dr. Zadeh, who was concerned about the writing and presentation skills regarding science research and publications at conferences.

Prof. Ratcliffe said “for many people writing may seem like a counterintuitive skill for a scientist – but it is an essential one. The world will listen to those scientists who lead not only in research, but who can convey that research through persuasive argument. Trinity is uniquely positioned to do great things with our writing centre and with the new Anne Steacy Program in Science Writing.”