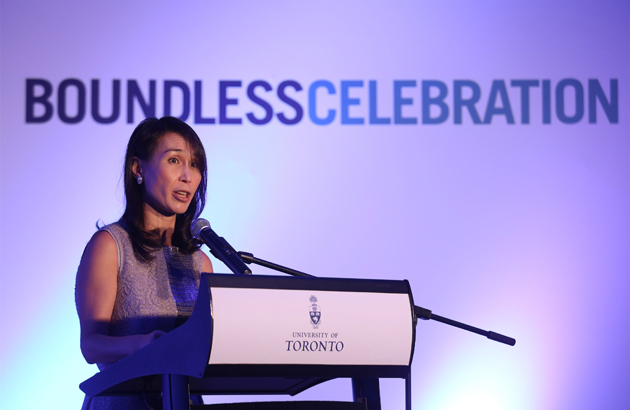 The Asia-Pacific launch of Boundless: the Campaign for the University of Toronto was celebrated recently at a gala event in Hong Kong.

The sold-out event at the W Hotel was attended by more than 250 alumni and friends from the Asia-Pacific region, and co-hosted by University of Toronto President David Naylor and alumna Daisy Ho.

Ms. Ho, who not only led the Gala Committee for the Hong Kong celebration, but chairs the University of Toronto (Hong Kong) Foundation, has made a gift of $2 million that addresses two priorities for the University, Mr. Palmer said.

Her generous gift will support an Award for Emerging Leaders, which will attract some of the brightest international visiting academic fellows to the Rotman School of Management. It will also create a major new undergraduate program to encourage and support student research projects on contemporary China and student exchanges with Chinese institutions.

Ms. Ho, Deputy Managing Director of Shun Tak Holdings Ltd., holds an MBA from the Rotman School and has been a member of the Dean’s Advisory Board since 2001. The Rotman School was represented at the announcement by several alumni, and by Suzanne Spragge, Assistant Dean, External Relations of the Rotman School who attended on Dean Roger Martin’s behalf.

Ms. Ho says of her time at the Rotman School that “I’ve never studied harder in my life—I think what helps me to push myself along in my career is the perseverance and the determination that U of T instilled in me. It is indeed a life-long education.”

President Naylor paid tribute to Ms. Ho’s contributions to U of T, saying the University community “has benefitted from her contributions of time and wisdom not only in the Asia-Pacific region but also world-wide, through her service as a member of our Campaign Executive.”

Ms. Ho, President Naylor said, “is also a champion for Canada more generally as a governor of the Canadian Chamber of Commerce in Hong Kong.”

Ms. Ho thanked the “dedicated team of volunteers at the U of T Alumni Association in Hong Kong” who help organize events for the 10,000 alumni in the region, saying “we are not just networking with each other, but also acting as the most faithful ambassadors of the school here in the community.”

The Association has a large membership “because of the strong ties between Toronto and this region,” Ms. Ho said. The great respect and emphasis that U of T places on cultural diversity is another reason to be proud, she said.

Mr. Palmer also announced that an anonymous donor has contributed $4 million to establish a Chair in Chinese Canadian Studies at University College.

Mr. Palmer said “the Chair will be the cornerstone of a new program to promote understanding and awareness of the significant contributions of Chinese Canadians to our country.”

With the latest two gifts, U of T has now raised a remarkable $1.12 billion towards its $2 billion goal for the Boundless campaign, Mr. Palmer said.

More than $17 million has been raised in the Asia-Pacific region since the campaign began.

The efforts of the University of Toronto (Hong Kong) Foundation were cited by Mr. Palmer as one example of the local impact of philanthropy. The Foundation’s scholarships have helped make the dream of a U of T education come true for more than 60 students in the last 17 years. It has changed lives and opened doors of opportunity that otherwise have been beyond the means of promising young leaders, Mr. Palmer said.

President Naylor noted that collaboration between U of T faculty members and colleagues in the Asia-Pacific region goes back more than a century. And, the President said, U of T faculty and students have benefitted from dozens of inter-university partnerships across the Asia-Pacific region, from MBA exchange programs to engineering collaborations.

The University is home to more than 10,000 international students with about 75 per cent of them coming from the Asia-Pacific region.

President Naylor said “this mix of students, ideas, perspectives and disciplines is more important than ever before. The global challenges we face together are complex, multifaceted and interconnected – from our substantial thirst for energy, to the vitality of urban regions; from cyber security to food security.”

Other U of T representatives at the gala included Prof. Paul Gooch, President of Victoria University, Prof. Cristina Amon, Dean of the Faculty of Applied Science and Engineering, Marilynn Booth, Dean of the School of Continuing Studies and Suzanne Spragge, Assistant Dean, External Relations, of the Rotman School of Management. Both Engineering and Rotman joined local alumni in sponsoring gala tables at which they hosted their Asia Pacific based alumni and friends.

Guests included His Excellency Mr. Koh Yong Guan, Singapore’s High Commissioner to Canada, a double graduate of U of T, and one of the most distinguished public servants in the modern history of Singapore. Also in attendance was Dr. Lap-Chee Tsui, Vice-Chancellor and President of the University of Hong Kong, formerly a distinguished faculty member and University Professor at U of T. Both gentlemen are also honorary graduates of the University of Toronto.

The gala event was part of a number of U of T events in the region. President Naylor spoke at the Science and Technology in Society Forum in Kyoto, Japan. He also hosted an alumni event at the Canadian Embassy in Tokyo, which was attended by more than 100 guests, and by Jonathan Fried, Canada’s Ambassador to Japan. In addition, the President delivered a keynote address to the Canadian Chamber of Commerce, titled Toronto and Hong Kong: A Tale of Two Regions. Together, these events are helping elevate U of T’s profile in the Asia Pacific region and demonstrating the many connections between Toronto and this dynamic part of the world.