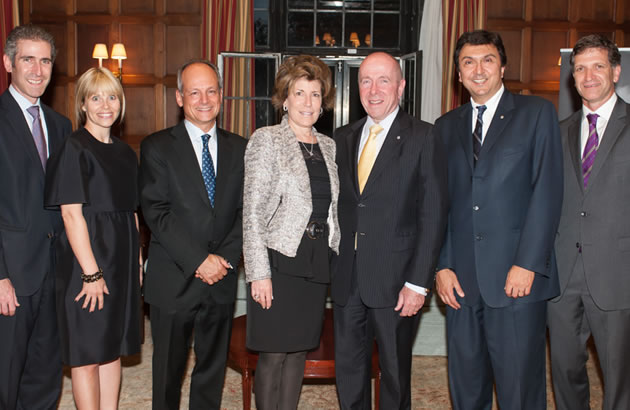 A generous gift from the Tanenbaum family has been announced, as U of T’s The Centre for Jewish Studies launches a public campaign. Meric Gertler, Dean of the Faculty of Arts and Science, said at the launch Thursday night that U of T has identified more than $36 million in aspirations to advance Jewish studies. The community campaign, led by co-chairs Larry and Ken Tanenbaum, in partnership with the UJA Federation of Greater Toronto, has set a goal of raising a minimum of $18 million.

“I’m especially excited to see the centre in its new home in the Jackman Humanities Building,” Larry Tanenbaum said.

Dean Gertler announced two significant gifts to the campaign for Jewish Studies.  The Tanenbaum family—through the estate of Anne Tanenbaum and the Lawrence and Judith Tanenbaum Family Charity Foundation—has given $5 million to support students, fund new programs for the university and the greater community and support day-to-day operations, among other initiatives.

He also announced that Roz and Ralph Halbert have made a gift of $1 million to the Centre through the UJA Federation’s Community Campaign. The gift builds on the Halberts’ generous support of academic programs that foster collaborative research between scholars at U of T and those at the Hebrew University of Jerusalem.

Ken Tanenbaum said “this evening is a call to action to support the Centre for Jewish Studies and its commitment to global academic excellence.  We have two goals:  First, to raise funds to enable the work of the remarkable faculty and staff. Our second goal is to raise funds for programming and student support.

“Our family has committed $5 million to this cause and we are thrilled to see the flourishing effect of this investment under the guidance of the Centre’s new director, Jeffrey Kopstein,” Ken Tanenbaum said. “The campaign offers the full spectrum of donor opportunities. The funds we raise today will have an impact on thousands of students tomorrow and for years to come.”

President David Naylor said “the Toronto metropolitan region has been lifted for generations by the talent, entrepreneurship, and generosity of its thriving Jewish community. Indeed, that community is a source of strength which few other major urban centres in the world can rival. For its part, the University of Toronto is Canada’s strongest research-intensive university, with the largest global footprint by an order of magnitude. It is therefore most appropriate that we should continue working together to build one of the world’s greatest centres of Jewish Studies.”

Dean Gertler said the Centre for Jewish Studies is “an interdisciplinary powerhouse,” attracting the most talented graduate students to its collaborative MA and PhD programs. More than 4,000 students enrol each year in its undergraduate and graduate courses.

“Now, working closely with leaders in the community, we plan to elevate the Centre’s standing as a global leader and build a powerful platform for the expression of Jewish identity and the promotion of cross-cultural understanding,” Dean Gertler said.

Larry Tanenbaum received an honorary Doctor of Laws from the University in June of this year for his distinguished record as a business leader and community builder, and his exceptional philanthropic support for health care and educational institutions. Ken Tanenbaum is a member of the University of Toronto’s Boundless Campaign Executive, a volunteer body that partners with the University in engaging its community, and helps advance its comprehensive $2 billion campaign.

The vision for Jewish Studies is unfolding in three distinct phases. The first phase, in 2008, elevated Jewish Studies to a centre from a program, paving the way for the new collaborative graduate programs and a major redesign of the undergraduate curriculum.

The second phase, now under way, moved the Centre to expanded quarters inside the Jackman Humanities Building.  The $36 million to support this phase includes funds for course development, conferences, six new chairs or professorships, and two new distinguished scholar positions to anchor major research and teaching streams, a curatorship to enhance scholarly resources and various awards to enhance the student experience.

The third phase would see the potential for new facilities, exhibition space and community partnerships.

Together, these priorities will establish the University of Toronto as one of the world’s premier forums for Jewish thought, Israel studies and Jewish cultural studies.