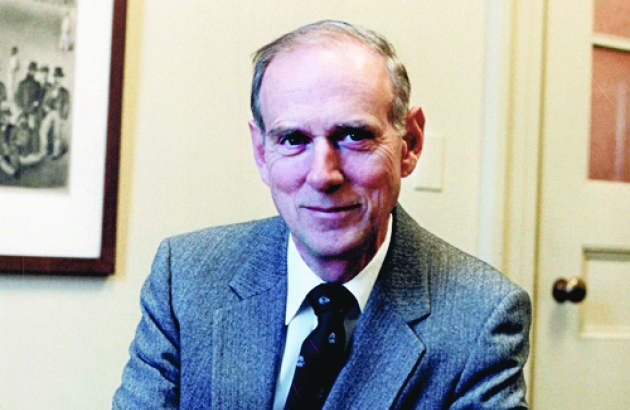 George Connell spent most of his academic career at the University of Toronto, starting with his undergraduate and graduate degrees, and continuing as a faculty member in the Department of Biochemistry. He was an outstanding researcher and teacher, and a skilled administrator who went on to serve as Chair of the Department of Biochemistry, Associate Dean of Medicine, and Vice-President of Research and Planning. Recognized for his talent and accomplishments, he was appointed President of the University of Western Ontario in 1977, a position he held until returning to his alma mater as President in 1984.

Professor Connell was an outstanding champion of U of T, whose presidency cemented our position as one of the world’s great universities. Through the process that led to his landmark paper, Renewal 1987, he rallied the University community to a vision of excellence that guides us still. He also initiated the precedent-setting Breakthrough fundraising campaign, established the Academic Board, which has been a key factor in the success of the University’s unicameral governance, and re-set the direction of the University’s tri-campus system.

With his rare gifts of analysis and foresight, Professor Connell also shaped public policy in Ontario and Canada. While at Western, he was a member of the Fisher Committee on the future of the province’s universities. After his presidency at U of T, he was appointed principal advisor to the Royal Commission of Inquiry on the Blood System in Canada (the Krever Inquiry). As a respected trustee of the McLaughlin Foundation, he helped guide grants to a wide range of institutions across Canada, creating better opportunities for post-graduate training in research for academic clinicians, building capacity in many health-related disciplines, and greatly accelerating the development of molecular medicine in Canada. Professor Connell’s advice on higher education and advanced research was frequently sought by governments, institutions, and leaders – not least his successors as U of T presidents.

George Connell received many awards and distinctions in the course of his brilliant career, in recognition of his service and achievements. A Fellow of the Royal Society of Canada, he was appointed an Officer of the Order of Canada in 1987.

A bust of George Connell, along with those of nine other giants of biomedical science, holds pride of place in the Terrence Donnelly Centre for Cellular and Biomolecular Research. He will be remembered not only for his scholarship and leadership, but also for his enormous integrity and decency, and the wise counsel he gave so generously to so many.

On behalf of the entire University of Toronto community, I extend condolences to Professor Connell’s wife, Sheila, their children, James, Thomas, Caroline, and Margaret (Meg), and their families.

Professor Connell’s family requests that charitable donations be directed to The George and Sheila Connell Fund in the Faculty of Medicine, to support the Department of Biochemistry’s distinguished visiting lecture program. Donations to the fund will also support research and education programs within the Department. The University and the Faculty of Medicine are grateful to Professor Connell and his family for supporting excellence in research and education, and to all donors who support the fund in Professor Connell’s memory.

BROWSE ALL NEWS
Laying the groundwork for prosperity: Canadian cities and their universities
MORE NEWS