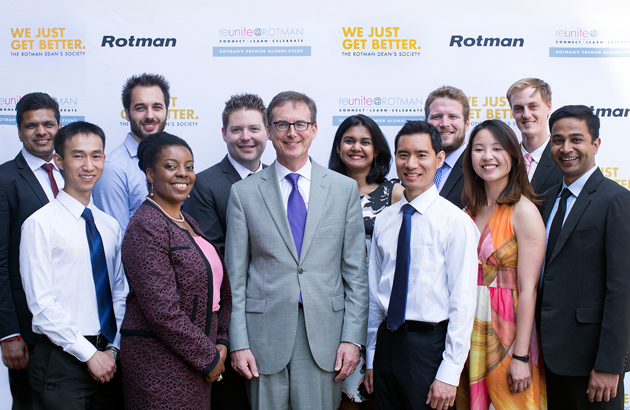 Montreal natives and brothers Joe and Ben Weider created a fitness empire, but their legacy is so much greater than a company. For Eric Weider (MBA 1988), Ben’s son and heir to the family fitness business, the true legacy is what he learned from his father and uncle about being an effective leader.

Leadership, often referred to as a “soft skill” is frequently cited as one of the most challenging competencies to teach and learn. It is also one of the most important qualities and skill sets for business and civic leaders. As Eric Weider has said, a strong leader is “someone who has maturity, is trustworthy and principled – someone who can inspire and mobilize others by example, who makes decisions based on values and principles.”

When Eric met Mihnea Moldoveanu, Director of the Desautels Centre for Integrative Thinking and Vice Dean of Learning and Innovation at the Rotman School, he knew he had found the right program to help expand the Weider legacy. Prof. Moldoveanu’s work as founder of the Self-Development Lab and his vision for transforming business education inspired Eric to establish the Joe Weider Foundation Leadership Development Lab with a $3 million gift from the Foundation.

The gift will enable the Self-Development Lab to extend its interactive, intensive training program – an already highly popular offering for first-year students – to second-year students who demonstrate outstanding leadership potential.

The Self-Development Lab at the Rotman School reimagines the classroom by applying an understanding of the phenomenology of leadership moments and experiences to help students develop their presence, moral reasoning depth and self-expressive repertoire – and further hone their communicative, collaborative and dialogical skills and effectiveness. Students are not “taught;” rather, they are coached, and their skill sets are developed through hands-on experience with the phenomena of leading and relating – and detailed, personalized, timely feedback.

Offerings include workshop-style classes and feedback sessions, as well as one-on-one coaching and mentoring focused on self-understanding and self-regulation, the moral and behavioral complexities of principled leadership, the augmentation of self-awareness, and the transformation of one’s own behavioural blueprint in accordance with one’s authentic and considered self. Problems and challenges faced by participants are tackled in real time, with a view to offering guidance addressing the specific issues and difficulties encountered by each student.

“It is clear that what we call ‘soft skills’ in management – which in fact are ‘harder’ to practice than any others – are far better thought of as developed than as taught,” says Prof. Moldoveanu. “It is essential to operate the lab with small groups that encourage collaboration among students and instructors. Eric’s far-sighted gift enables us to reach further down the path of personalized learning, and apply it to precisely the skill set most in need of development in today’s social and business landscape.”

A businessman and entrepreneur in Los Angeles, Eric inherited a love of history from his father, who often looked to historical figures to inform and inspire his own leadership style. Ben Weider, who died in 2008, wrote extensively on Napoleon and founded the International Napoleonic Society. His collection of artifacts makes up a permanent gallery in the Montreal Museum of Fine Arts.

The Weider name, however, is most closely identified with health and fitness. Joe and Ben Weider founded the International Federation of Body Builders. Joe was also the creator of the Mr. Olympia bodybuilding contests, the publisher of several bodybuilding and fitness-related magazines, and the manufacturer of a line of fitness equipment and fitness supplements. He was also a mentor to bodybuilder-turned-actor-and-politician Arnold Schwarzenegger, whom Joe convinced to move to the US in the 1970s.