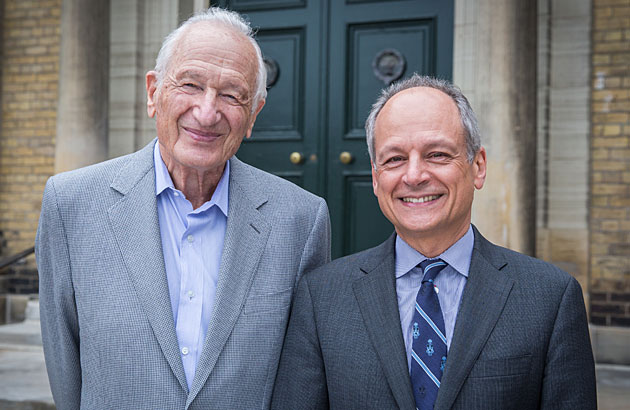 Sachs’ gift builds on earlier support, which combined with his current donation, totals $2 million toward this collaboration. Like his initial gift in 2009, the new initiative is designed to accelerate joint research projects between U of T’s Faculty of Applied Science and Engineering and the Technion. The goal to launch and accelerate joint inquiries in biomedical and civil engineering is being achieved through two interlinked strategies.

The Lyon Sachs Collaborative Research Fund rapidly scales up research collaborations by enabling joint symposia and workshops, funding student and faculty travel between Haifa and Toronto, as well as enabling sabbatical visits and short-term graduate student exchanges. Meanwhile, the Lyon Sachs Fellowship Fund has allowed five postdoctoral fellows from the Technion to be awarded positions at U of T in the departments of Mechanical and Industrial Engineering, Chemical Engineering and Applied Chemistry, Civil Engineering, and Electrical and Computer Engineering.

Gary Goldberg (BA 1972 UC), who has deep connections to both universities, has helped facilitate the growing collaborations and relationship between U of T and the Technion, and other institutions in Israel. “As a volunteer at both U of T and the Technion, I see Mr. Sachs’ generosity as a true inspiration for what is possible when world-class researchers receive the support they need to work together,” he says.

The results have been impressive. Milica Radisic’s lab is collaborating with Technion’s Shulamit Levenberg on methods to create vascularized tissues—those that have blood vessels like veins, arteries and capillaries. Creating such tissue is a key challenge in regenerating damaged hearts and for providing tissue that can be used in the lab. This collaboration originated from a symposium funded by the research fund, as did another joint project in polymeric biomaterials, which encompasses plastics, fibers, and adhesives used in medical applications. In that study, Ofer Levi is collaborating with Esty Segal on developing low-cost nano-biosensors, which will have a wide range of applications in biomedical diagnostics, in vivo imaging, and the study of bio-molecular interactions.

The Lyon Sachs Collaborative Research Fund has also sparked collaborations between the Technion Institute’s Center for Catastrophic Events and Extreme Loading and U of T’s Centre for Resilience of Critical Infrastructure. The focus of the research is blast and extreme loading of infrastructure, including test-bombing structures. The collaboration has attracted further research for the Centre for Resilience of Critical Infrastructure in the form of a $1.25M research grant from the UK-based Explora Foundation.

Meanwhile, the Lyon Sachs Fellowship Fund has already begun to play a powerful, long-term role in building closer ties among the cream of Canadian and Israeli academia. “These are among the best PhD students from Israel who come here,” says Markus Bussman, Vice-Dean of graduate studies for U of T Engineering, who oversees the Sachs funds. “It’s important post-doctoral preparation for top PhD students to contribute to research and teaching when they go back to Israel.”

Sachs Fellow Ariel Epstein says the fellowship has been a powerful personal and professional boost. He’s working with renowned researcher Dr. George Eleftheriades. “I’m with a large group of researchers doing cutting-edge work related to my field of electromagnetic metasurface design, so the work has been accelerated,” he says. “Also, thanks to the reputation of our team, top professors come here from around the world to give lectures and the team is often asked to present at conferences, lending high profile to the work.”

The benefits do not all flow one way, of course. Bussman points to the Technion’s impressive strengths, particularly in science and technology, which offer so many opportunities for U of T star post-docs who will be selected to go to Israel, beginning this year.

Gary Goldberg sees a long-term impact from Sachs’ generosity. “This is only the start. These two great institutions have begun profound collaborations across many pressing engineering challenges, especially in health and infrastructure, which are paying off now and will continue to do so in the years ahead.”

A generous gift bolsters a strong tradition of student support