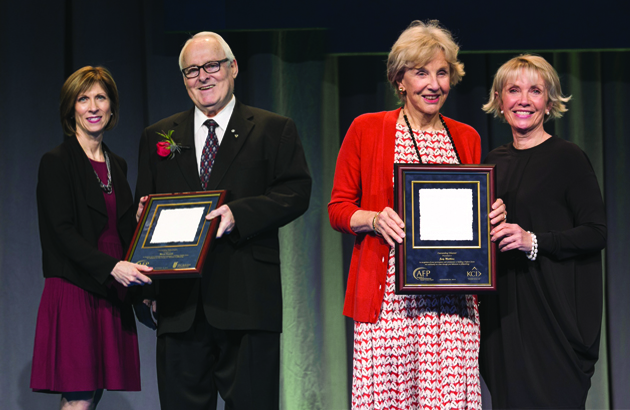 Marcel Desautels and Anna Shahid are linked together through their passion for music and, more importantly, their love of learning.
Shahid, just finishing her MBA at Rotman and a recipient of a Desautels scholarship, was among 1,000 people who gave a standing ovation to Desautels after he received the Outstanding Philanthropist award from the Greater Toronto Chapter of the Association of Professional Fundraisers (AFP). The luncheon was held at the Metro Convention Centre on Wednesday, November 26.

There was another standing ovation for Judy Matthews, who received the Outstanding Volunteer award from AFP. Matthews is U of T alumna and philanthropist. Among her many contributions to making Toronto more livable is the donation she made to help narrow St. George St. and plant trees to make U of T campus more beautiful.

In a video just prior to the presentation, U of T President Meric Gertler said “the U of T is so proud of its close and longstanding association with Marcel Desautels. Marcel is one of those people who understands in his bones the value and power of higher education to transform people’s lives and build better societies.” Gertler called Desautels “a model of philanthropy and a truly great Canadian.”

Desautels earned an honorary degree from the University of Toronto in 2003, and is currently an Honorary Chair of U of T’s Boundless campaign. He established the Canadian Credit Management Foundation in 1996 and through it he has given more than $41 million to U of T, including a $20 million donation to the Marcel Desautels Centre for Integrative Thinking Excellence Fund at the Rotman School of Management.

Desautels has said that when he started the foundation he considered focusing on the medical field but realized the great philanthropic work business people such as Bill Gates and Warren Buffet have done, “and I thought, why not business. I started with a great business school in Rotman which trains people who would become senior executives and who would in turn be able to do great things in the world.”

Desautels’ donations to U of T and to higher education across Canada, including gifts to McGill University and the University of Manitoba to name their business and music faculties respectively, have created more than 400 scholarships for students. “It is a gift that keeps on giving,” he said in the video. “A real turn on.” He was born in St. Boniface, Manitoba and is also a strong supporter of the Universite de Saint-Boniface.

Judy Matthews is an urban planner with an acute interest in the public realm and urban green space. She has worked for Metropolitan Toronto and the City of Toronto, and was the Senior Development Officer for U of T’s Open Space Program.

In a video just prior to accepting her award, she said she began volunteering as a young mother with four children after reading Plato’s Republic in first year philosophy at U of T. In essence, Plato wrote about working for the common good, “something that struck a strong chord deep inside of me.”

She said she has always had a “strong need to create places where people can gather and connect, to eat, play and talk to your neighbours.”

In addition to being the driving force behind the revitalization of St. George Street, Matthews’ catalytic leadership has ranged from the anti-Spadina Expressway campaign to the creation of a pedestrian piazza and music garden at Harbourfront.Today she is Director of Toronto Artscape Inc., which is introducing a range of programs in Regent Park.

She said focusing on philanthropy is a choice she made rather than “going south to live in a gated community and playing golf – not for me. My life is fuller and richer by leveraging my philanthropy and my professional expertise and values to helping build a more humane city.”

In his video, Desautels is seen singing an operatic song in front of a small group of people. Opera is one of his passions.

Anna Shahid, just finishing her MBA at Rotman, was a recipient of two scholarships sponsored by Desautels, including the Canadian Credit Management Foundation Fellowship, which is an MBA entrance scholarship awarded on the basis of academic merit.

Shahid, a practicing lawyer, was an international student from Bulgaria. She said “Marcel’s genuine care for the well-being and success of his scholarship recipients transcends the simple gesture of giving. Having discovered my aspiration to become an entrepreneur, Marcel offered to become my mentor and provide me with invaluable business advice.”

When Desautels discovered that Shahid too loved to sing, he invited her to accompany him to the opera. She said Desautels “understands the need to equip the future generation with the right tools for success, promoting education and teaching business acumen.”

Desautels said winning his award was the “icing on the cake” for him. And Matthews said winning her award was “humbling, but I am thrilled that I may have contributed in some small way to the common good.”