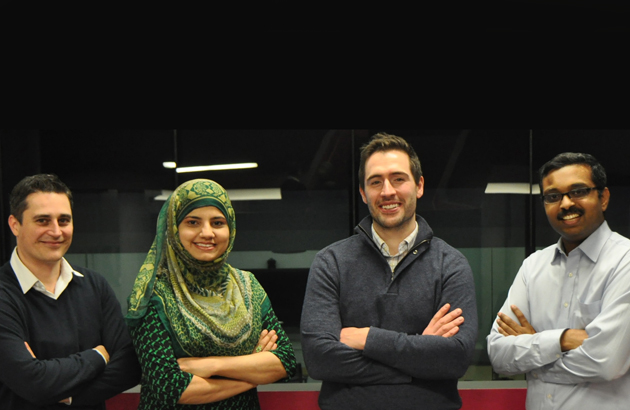 Run in partnership with the Clinton Global Initiative, the Hult Prize Foundation is a startup accelerator which brings together the brightest college and university students from across the globe to solve the world’s most pressing social problems, from housing and energy to food security and healthcare.

This year’s challenge: Solving Early Childhood Education in the Urban Slum. Team Attollo came up with the innovative concept of “Talking Stickers,” which aims to bridge the so-called “word gap.”  By their third birthday, children living in disadvantaged conditions have been exposed to 30 million fewer words than their more privileged counterparts. This disparity not only limits a child’s readiness for school, it also profoundly affects their long-term success and well-being.

This fall, Aisha Bukhari, Peter Cinat, Lak Chinta, and Jamie Austin—all new Rotman MBA graduates—will pitch Talking Stickers to a world-class panel of judges at the Global Final hosted by President Bill Clinton. The winning team will be awarded USD $1 million in seed funding to transform their concept into reality. Team Attollo is the only remaining Canadian team and this is the first time the University of Toronto has made it to the final round.

In preparation for the final, the team is spending the summer further developing their prototype and testing it in disadvantaged communities in India and Africa—the results of which will be critically important to their success in September’s final. While the University of Toronto has covered a portion of their summer expenses, the team is still looking for seed money from private sources to complete their prototype and field trials over the summer. To date, they have secured $100,000 toward the required $400,000. Each of the team members have recently resigned from their day jobs to focus full time on the startup.

“This is a vital stage in the process,” says Chinta. “Collectively, our four team members hold three engineering degrees, two PhDs in neuroscience, and four MBAs, all from U of T. We’ve also got international experience and experience in product development. If we can demonstrate that our concept works in real world conditions we’ve got an excellent shot at taking home the prize.”

This July and August, Austin and Chinta will conduct field trials in Hyderabad, India and Mombasa, Kenya in partnership with international organizations such as Aga Khan Foundation and Pratham. Meanwhile Bukhari and Cinat will move into a business incubator in Boston, where each of the six remaining teams will receive mentorship and strategic planning advice as they create prototypes and set up to launch their new social business.

The need for education-focused social enterprises like Talking Stickers has never been greater. In developing countries, more than 100 million children under six fail to reach their potential in cognitive development, which negatively impacts their lives, as well as the communities and nations in which they live. “We know that this early disparity only grows over the child’s life,” says Austin. “There’s a critical window of language development. As an adult, our vocabulary is hugely determined by the speech we heard from parents or caregivers during our first three years of life.”

It is also now clear that children acquire vocabulary when caregivers read, talk and spend time with them. Television and iPads, for example, do not have the same effect. Personal engagement provides children with the diverse stimulation and reinforcement needed for optimal early brain development. In underprivileged urban settlements parents and caregivers lack time and resources, and are often less confident educating their children. As a result, children living in these areas fall behind their more affluent peers.

This is what makes the concept of Talking Stickers so groundbreaking. “Children love stickers,” says Chinta. “We want to channel this interest into a learning and developmental opportunity.” Using Quick Response (QR) codes that can be activated by a simple, low-cost electronic “reader” the stickers are designed to stimulate early childhood learning by recording a parent or caregiver offering words of encouragement, educational phrases, songs, stories, and executive function activities. The team will train local facilitators to help parents and caregivers record their voices, which can then be played back. The stickers can also be put on objects around the house, turning them into learning tools and encouraging children to make the word associations that foster early brain development.

“Every member of our team wants to make a difference,” says Austin. “The social enterprise aspect of our work is very important to us. Talking Stickers will be a business that makes money, but more importantly, we believe our product can change lives.”

BROWSE ALL NEWS
Following on a record fundraising year, the Boundless campaign has now passed the $1.8-billion mark towards its $2-billion goal
MORE NEWS