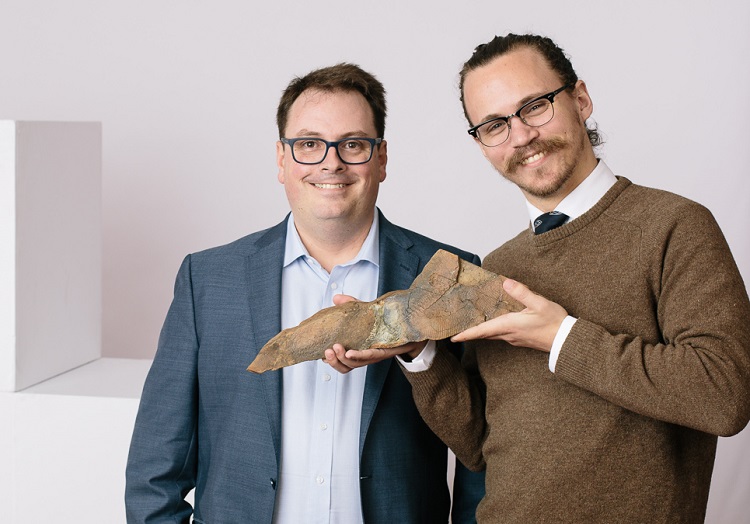 Can a 450-million-year-old fossil save the planet from climate change? It might, if you look at it right.

With an idea borrowed from machine learning and a crucial travel grant funded by generous Annual Fund donors, PhD student Daniel G. Dick has come up with a new way of understanding the past—one that might help unlock the secrets of the future.

Currently in the third year of his PhD program in paleontology at the University of Toronto Mississauga, Dick used the engineering concept of “fuzzy logic” to build an ecosystem model that accurately describes the roles different species play in nature, and helps scientists pinpoint which ones are most at risk from climate change.

So why are species roles important? “If you can figure out the role that everything plays in an ecosystem, you can find the weak links,” says Dick, who also earned an MA from U of T in 2014, in anthropology. For example, throughout history, animals from sponges to corals and even clams have built reef frameworks that other marine animals live on. “This habitat-building role is so important that many different organisms through time have evolved to fill that same niche,” says Dick. When one of those organisms dies, though, a cascade of effects are passed on.

“Who’s our barometer? Which organisms are resilient?

“Who’s our barometer? Which organisms are resilient?” adds Marc Laflamme, a professor in the Department of Chemical & Physical Sciences at U of T Mississauga who worked with Dick on the project. Laflamme studies and catalogues very ancient fossils from around the world, teasing out how they lived from clues such as shape of the teeth, stomach contents, levels of chemicals in the bones, or where they are found. Studying fossils from 450 million years ago, during the Ordovician-Silurian mass extinction, Laflamme and Dick know, for example, that reef ecosystems suffered greatly in response to rapid climate change.

To make a picture based on roles rather than on individual species, Dick borrowed a concept from engineering—“fuzzy” logic. The classic example, he says, is deciding when a pile of rice stops being a pile. “You take one grain out – is it a pile of rice? Yes. You take another one out. It’s still a pile of rice. You keep doing this…at some point it stops being a pile of rice, but it’s not clear where. Identifying when one species’ functional role has changed into another is often this difficult.” His model captures these kinds of gradual changes, he says, highlighting the impact of subtle but important shifts in an organism’s ecological role. How do we reconstruct a living past from fossils? In the Bahamas, two ecosystems are captured in time just metres apart. Photo by Daniel G. Dick.

Travel was necessary to test the model

Any effective model of a fossil ecosystem needs to account for what’s missing. Soft-bodied creatures, such as worms, rarely leave a fossil. Painting a picture in terms of roles aids the reconstruction, but what Dick needed was to test his model against something known, to show how it accounts for gaps.

That’s why he travelled to the Bahamas on a $2,000 grant from U of T Mississauga’s Annual Fund. On Bahamian beaches, fossilization is proceeding in an accelerated fashion. “There are living animals in the water,” says Dick, “and when they die waves wash shell and bone onto the sand. Higher up the beach, you see the sand actually starting to fuse together into soft rock, and you can dig down until it’s solid—you’d need a sledgehammer to break it open and it’s only a hundred years old.” He checked at each level what record exists of the living animals in the current ecosystem. The model performed exceptionally well in this check against a known reality. “It seemed to produce very accurate, coherent results,” Dick says. “And it showed that the loss of information in the fossil record is essentially not as bad as we thought. This test was impossible to afford without a travel grant, and it made a huge difference to the entire project.”

Now the pair can apply Dick’s fuzzy model to Ordovician-Silurian fossils and compare how the ecosystem looked both before and after the ancient climate catastrophe, says Laflamme. “That’s important because it allows us to start making informed decisions about climate change, not just guesses.”

When generous donors support fundamental research like Dick’s, they set bright minds free to make unexpected connections and lift knowledge in more than one field. “By using an approach from another field you see different ways of solving problems,” Dick says, “and you have no idea what you might find.” That’s why he’s made his model open-source so other scientists can use it—and he’s had a lot of interest at conferences.

And those unexpected connections are what advance knowledge, says Laflamme. “In many cases we don’t exactly know what the outcomes are going to be,” he says, “but every time we do fundamental research, it starts informing what our future research is going to be. My fossil research is a piece of a puzzle that then enters into a much larger thing. It’s fun to be part of that world of exploration.”

Support game-changing research like Daniel’s through a gift to the U of T Mississauga Annual Fund.

Give Now
BROWSE ALL NEWS
Meet new chancellor Rose Patten: a dynamic life, a vision for the future
MORE NEWS

Tata Trusts supports partnership with U of T in India

Support game-changing research like Daniel’s through a gift to the U of T Mississauga Annual Fund.