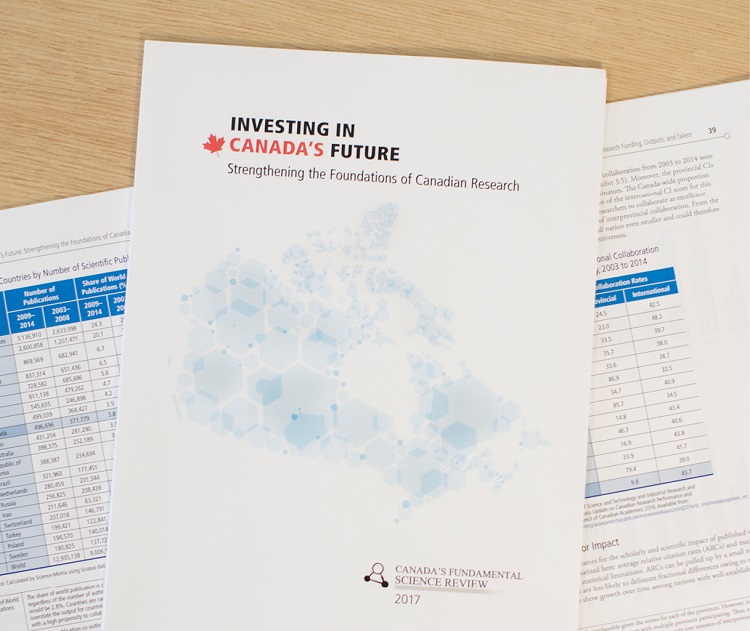 University of Toronto professor and startup founder Paul Santerre understands better than most the value of scientific research.

Endexo is a health care game changer. In the United States alone, catheter clots cost around $1 billion to treat and cause around 50,000 deaths every year. Not only does Endexo relieve some of the growing financial pressure facing health care systems around the world, it saves countless lives by preventing unwanted internal clotting.

However, while Endexo earned Santerre deserved acclaim, the science behind the product wasn’t developed overnight.

Santerre’s emphasis on the importance of supporting fundamental research is echoed in Investing in Canada’s Future: Strengthening the Foundations of Canadian Research, published by Canada’s Fundamental Science Review and also known as the Naylor Report.

Released in April 2017 after former University of Toronto president David Naylor’s exhaustive consultation with leading stakeholders and the public, the report makes several key recommendations to the federal government on ways to renew Canada’s commitment to long-term fundamental research in science, social science and the humanities. These include the formation of a new national advisory council on research and innovation and a $485-million increase funding for research at every development stage over the next four years.

The report points out that technologies like Endexo don’t emerge overnight from corporate research and development departments, but through the ‘long game’ of investigator-led, independent research, particularly in higher education institutions. Many of the world-changing innovations we take for granted began as the passion project of a community of dedicated scientists taking intellectual risks and following their curiosity with the support of stable federal research funding. Cellphones, MRI machines, even the Internet were developed over years—sometimes decades—in universities and research facilities.

That’s equally true of the University of Toronto. With government support, the University funded research that eventually led to insulin, touch screen technology, stem cell therapy and artificial intelligence. These breakthroughs have respectfully saved the lives of countless diabetic patients, formed an integral part of now-ubiquitous smartphone technology, laid the groundwork for regenerative medicine, and revolutionized the global economy. And they all began with ideas pursued in a lab or research facility by a group of curious scientists.

Despite these advancements, the Naylor Report reveals Canada’s legacy as a leader in fundamental research is under threat. The report notes that the past decade has seen a 35 per cent drop in per-capita federal funding for investigator-led research, and the Government of Canada now accounts for only 23 per cent of funding of research and development in higher education, making the country an outlier among developed nations. Meanwhile, federal research funding is increasingly focused on “priority-driven” projects, leaving less money available for the kind of organic, early-stage independent research that eventually leads to breakthroughs like Endexo.

All this has had a direct impact on Canada’s global competitiveness in scientific research and development. Between 2003 and 2014, Canada’s rate of growth for both published works and number of citations in other papers trailed that of other leading developed nations. Meanwhile twice as many Canadians have won Nobel prizes in research-related fields while working in the United States than in Canada. As David Naylor warned on the Report’s release, “Governments cannot short-change basic research and expect innovation to flourish.”

The return on investment in early-stage research is incalculable

That’s why the University of Toronto is urging the government of Canada to fully adopt the recommendations laid out in the Naylor Report, including key directives on the strategic direction, oversight and administration of funding for basic research in science and the humanities, as well as multi-year funding increases.

“The Naylor Report argues persuasively that Canada needs to continue to support such research, and it charts a clear course of action to that end,” University of Toronto president Meric Gertler said this past April. “U of T and scholars across the country are calling on the federal government to embrace and fully implement the report’s recommendations.”

If you cut fundamental science, you cut the entire innovation pipeline

The University of Toronto believes the benefits of adopting the Naylor Report’s recommendations cannot be overstated, and that the return on investment in early research is incalculable. Stable, consistent government-funded research not only attracts world-class academic talent to Canadian universities, it encourages philanthropic and industry investment. It also drives innovative technologies and ideas that improve quality of life, increase economic productivity, and lay the groundwork for globally competitive companies.

“We’re in a knowledge-based economy,” says Santerre. “I don’t think the clock is going to go back on governments wanting to see the taxpayer’s investment create benefit for society, socially and economically. That’s rightly here to stay. However you can’t fund that by cutting fundamental science, because if you cut fundamental science, you cut the entire innovation pipeline.”