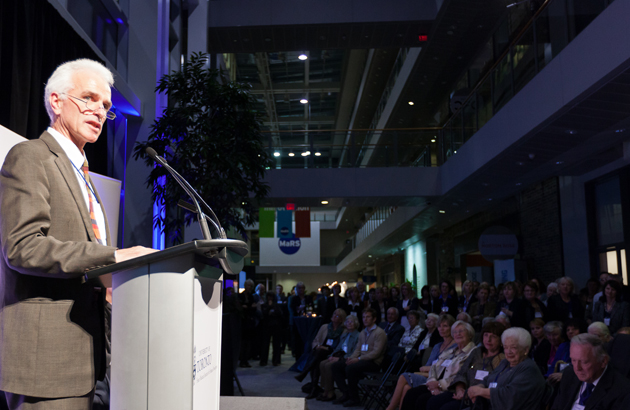 The Fraser Mustard Institute for Human Development (FMIHD) is a bold and necessary response to the challenge of providing every child the opportunity to have the best start in life.

FMIHD is the first institute of its kind in Canada, bringing together University of Toronto researchers from a variety of disciplines — such as education, medicine, psychology, biology and social work — to connect in new ways and make the most of the early years of human development.

The new institute is named in memory of early human development champion Dr. J. Fraser Mustard and encompasses faculties and divisions across U of T as well as its affiliated hospitals.

“Fraser Mustard was a giant who had a huge impact on his country; a man of unflagging curiosity and great generosity of spirit,” said U of T President David Naylor. “The Institute for Human Development was his vision and gift for future generations.”

Mustard was a towering figure in the arena of early childhood development. The Early Years Study—Reversing the Real Brain Drain, released in 1999 and co-written with the Honourable Margaret Norrie McCain for the Ontario government, drove awareness of the singular importance of investing in early childhood to entirely new levels, influencing everything from government policy to scientific research to educational practice.

At the institute’s launch, held at the MaRS Discovery Centre, FMIHD inaugural Executive Director Stephen Lye, a U of T professor of obstetrics and gynecology, spoke about how the first 2,000 days of life — from birth to age six — are critical to a child’s life-long health, learning and social functioning.

“FMIHD creates a critical mass of brilliant researchers from different disciplines and professions, putting U of T at the very forefront of research to maximize the health and full potential of our greatest resource — our children.”

Dr. Cameron Mustard, son of Fraser Mustard, and a professor at the Dalla Lana School of Public Health, spoke about how his father was well known for his relentless advocacy for the importance of investments in early child development and also for the passion with which he engaged the fundamental scientific questions of human development in the early years.

“The University of Toronto’s commitment to establish a transdisciplinary Institute for Human Development resolved, for my father, one of the uncompleted tasks on his to-do list. He had a vision that U of T, as the most remarkable Canadian university of our generation, could provide international leadership in scholarship in this field.”

FMIHD has supporters from around the world, including Mats Sundin, former captain of the Toronto Maple Leafs hockey team and son of a pediatric nurse. Mr. Sundin has established exchange fellowships for two elite scientists in developmental biology between U of T and Karolinska Institutet in his home country of Sweden.

“Now that I’m a new father, I see how important it is to give babies the best possible start in life. I hope the important research that will take place at the U of T’s FMIHD will help the world’s children develop into healthy adults.”

To date, $4 million has been raised towards an initial $10-million goal, thanks to the generous support of the Hon. Margaret Norrie McCain, Eric Jackman, Mats Sundin, Eb and Jane Zeidler, Maple Leaf Sports and Entertainment and Fraser Mustard’s long time supporters, the Lawson Foundation.

In addition, U of T’s Connaught Committee bestowed its inaugural $1-million Global Challenge award to the FMIHD to fund a multidisciplinary research study, a strategic planning workshop and a Distinguished Visiting Scientist program. The Connaught Global Challenge International Symposium, which coincided with the IHD launch, featured national and international scientists speaking on the topic of “Investing in Mothers and Children: Developmental Trajectories, Health, Learning and Society.”

The institute has named Professor Marla Sokolowski, University Professor in the Department of Ecology and Evolutionary Biology at the Faculty of Arts & Science, as its inaugural academic director.

“The conversation between our genes and our environment in early life has lifelong consequences for our health, learning and social functioning,” she said. “Understanding how our early experience affects us is one of the research questions being asked by our highly transdisciplinary network of researchers. FMIHD will enable the science of early human development to integrate with the design of our health and education programs, bringing together those who are responsible for the well-being of our children — researchers, policy makers, educators, families and caregivers — in an active and equal partnership to create and share knowledge.”