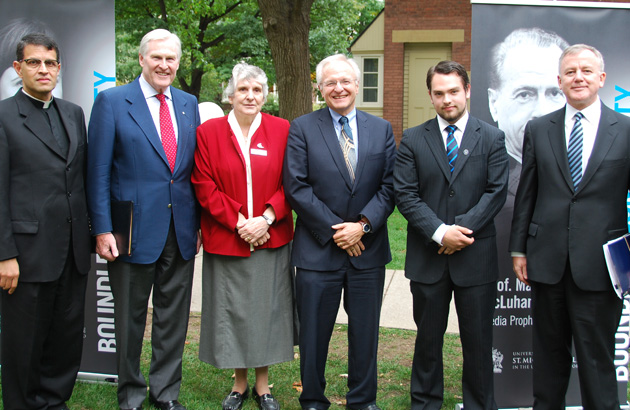 University of St. Michael’s College President and Vice-Chancellor Anne Anderson csj (Sisters of St. Joseph) announced that $24 million had already been raised in pursuit of this goal.

The motto of the campaign, Boundless Community, stresses the fundamental St. Michael’s principles of community connections and engagement with social justice.

“Boundless Community will create a new platform for academic achievement and excellence and further establish St. Michael’s College as an important locus of innovation and collaboration,” Anderson told an assembly of students, faculty and alumni and friends in the College Quad.

“Cornerstone will build character, enhance the pursuit of social justice and create a platform for greater dedication to community,” Anderson said of this initiative, which will allow every entering St. Michael’s student to take a credit course in Justice, Culture and Community.

Anderson noted that Cornerstone would “reaffirm” the St. Michael’s commitment to the motto of the Congregation of St. Basil: “Teach me Goodness, Discipline and Knowledge.”

Standing between a pair of towers decorated with blue-and-white colours, USMC Collegium Chair Hugh McKinnon pointed out that the launch was scheduled on the Feast of St. Michael, a day traditionally associated with the onset of the fall term in universities.

“When you cross the quad today and see the beautiful sculpture of the Archangel there, you may remember that Michaelmas is always the first holiday of the new academic year, and this special day honours both our founding and our historic academic and spiritual tradition,” he said.

“We’re glad he’s on our side,” McKinnon added, referring to St. Michael.

St. Michael’s College Student Union President Mike Cowan highlighted several gifts that had contributed to the success to date: $1 million from James McGovern and his family in support of the Chaplaincy Program; $150,000 from Philip and Linda Armstrong for the Celtic Studies program; more than $30,000 for new computers and furnishing from the Friends of the J. M. Kelly Library; and a gift from MacKinnon of materials, books and manuscripts relating to the British philosopher, novelist and religious thinker G. K. Chesterton.

MacKinnon, who functioned as master of ceremonies for the launch, described the Kelly Library, which will hold the Chesterton collection, as “one of the essential elements” of the St. Michael’s community and “a great chill spot” for students.

“We are the ambassadors, the advocates,” Lubinsky said. “We were once enrolled here and this was our academic home. We lived in residence and played football on the fields. We filled St. Basil’s Church for mass on Sundays and we thronged in Teefy Hall and in the campus quad by the statue of the Archangel. Just as St. Mike’s students do today.”

Last to speak was U of T Chancellor Michael Wilson, who placed the SMC campaign in the context of the broader Boundless initiative.

“St. Michael’s has grown alongside our city and our university, and I firmly believe this campaign marks the next big step for this college,” he said.

Two ensembles provided music for the event: Musicians in Ordinary, the SMC ensemble in residence, which performed Renaissance and early Baroque repertoire, and Back of the Room, a traditional folk group made partly of faculty members and graduates of the Celtic Studies Program. There were exhibits by programs, clubs and divisions, including the Kelly Library, which issued souvenir bookmarks. The launch ended with a barbecue.