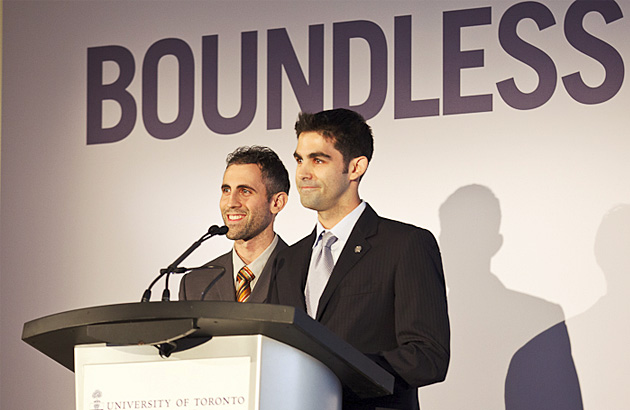 On September 13, more than 300 students, benefactors, volunteers, faculty, staff and members of the medical community gathered to celebrate the launch of Boundless Impact: the $500-million campaign for U of T’s Faculty of Medicine.  The campaign seeks to transform health care by training future leaders, attracting the best and brightest students and researchers from around the world, and putting scientific discovery into action.  Dean Catharine Whiteside announced the campaign—the largest-ever fundraising initiative for a medical school in Canadian history—at an event in the Terrence Donnelly Centre for Cellular and Biomolecular Research.  President David Naylor reported that the Faculty has already raised $251.3 million, more than half its campaign goal, including a $2-million gift from students.

The campaign launch began with this poignant declaration of support, when two of the Faculty’s first-year residents, Jeff Alfonsi and Joshua Levitz, spoke of how important the Faculty has been to them personally and announced, on behalf of their peers, a $2-million gift in support of the campaign.  Truly philanthropic in nature, and extraordinarily generous, the gift is being made with the proceeds from Toronto Notes, a comprehensive medical review revised annually by the University of Toronto graduating medical class, and renowned around the world for its excellence in the field.

In her keynote address, Dean Whiteside spoke about the central role that charitable giving and philanthropic efforts play in advancing the Faculty’s research and education objectives and acknowledged the generous support of leaders like Michael Dan (Chair of the Campaign Cabinet), Terrence Donnelly, Carlo Fidani, Paul Dalla Lana, and Mark and Stuart Tanz, who have made pace-setting gifts to the Faculty.  In total, more than $60 million in support has come from the Faculty’s volunteer campaign leadership team.

“The Faculty of Medicine’s integrating role uniquely positions us to spark the discoveries and drive the changes that will transform health globally in the 21st century, with the help of our supporters,” said Whiteside.   “The complexity of the health challenges we face today requires solutions that can only emerge through innovation that is collaborative and cross-disciplinary.”

The Faculty of Medicine’s academic network is vast. In partnership with nine partner research hospitals and 18 community affiliates, the Faculty’s 6,800 academic and clinical faculty members educate more than 8,600 trainees annually, including MD students, graduate and doctoral students, health sciences professionals, residents and fellows. To ensure these trainees have continued access to world-class opportunities, the Faculty will seek to raise $100 million for student programming and financial aid.

“Students in the Faculty of Medicine will become the next generation of health professionals and leaders. They inspire me to be confident in the future of health care in Canada and around the world,” said Dr. Terrence Donnelly, a generous supporter of the Faculty and chair of recruitment for the campaign.

Research in the Faculty of Medicine boasts a critical mass of expertise in four areas, reflected in the campaign’s strategic priorities; human development, global health, neuroscience and brain health, and complex diseases. To provide the Faculty’s scientists with leading-edge research technology, the campaign will seek to raise $200 million for research programs and infrastructure.

Recruiting and retaining world-leading faculty is also a top priority for the campaign, which aims to raise $200 million to support faculty. “Our campaign will enable us to continue to attract and retain the best academic talent in the world,” said Whiteside.