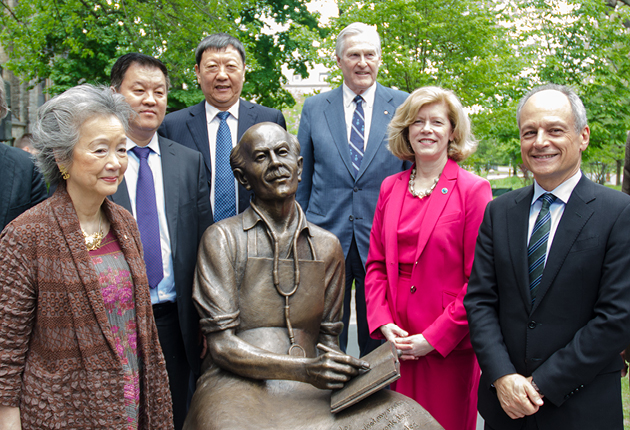 Present for this important occasion were members of Bethune’s family, as well as former Governor General of Canada, The Right Honourable Adrienne Clarkson, U of T Chancellor Michael Wilson, U of T President Meric Gertler, and Dean of Medicine Catharine Whiteside.

The sculpture, which is seated between the Medical Sciences Building and the McMurrich Building near Queen’s Park Crescent, shows Bethune in a quiet moment of contemplation.

“Statues of Bethune are usually heroic and strident,” said Pellettier. “I wanted this interpretation to be more contemplative and approachable.”

The event recognized 75 years since the occasion of Bethune’s death. The statue was made possible by an $800,000 donation to U of T from Chinese philanthropists Zhang Bin, President of the China Cultural Industry Association and Chairman of Millennium Golden Eagle International, as well as Niu Gensheng, Honourary President of the Laoniu Foundation. Those funds will support the Zhangbin-Niugensheng Bethune Bursaries and Award, in addition to the costs associated with the sculpture.

A celebration was held the following evening, on Saturday May 31, in honour of Bethune. The celebration featured entertainment by award winning singers Wang Qingshuang and Zhang Haiqing who travelled from China for this occasion and acrobats from the Cirque Sublime. Planning for this event was led by volunteer chairman, Justin Poy, and a dedicated team of volunteers, including Madame Clarkson who served as the event’s honorary chair.

Bethune is best known as a wartime surgeon. While enrolled at U of T, he interrupted his studies to serve in the First World War. His wartime experience convinced him of the need to transport blood to the frontlines rather than the patient to a hospital. This would lead him to invent an early MASH-like unit – a vehicle with a small refrigerator – during the Spanish Civil War, where he offered his services to the Republican government. He also worked during the Second Sino-Japanese War training people with little schooling to become para-medicals or “barefoot doctors.” While in China, Bethune died of septicemia in a Chinese mountain village in 1939 at the age of 49. His work became famous when Mao penned his essay, In Memory of Norman Bethune, which became mandatory reading for Chinese school children.

In addition to his wartime service, Bethune is also remembered as a respected thoracic surgeon who patented several medical instruments, including the “Bethune Rib Shears,” which are still in use today.

“Norman Bethune’s legacy is that of an internationalist; that meant that he looked beyond his own borders, and he looked to China, and where he could help there, as a doctor,” said Clarkson, who served as the honorary chair of the Bethune Gala and has written an acclaimed biography on Bethune. “He is the greatest Canadian ever. His achievements make us all proud to call him a fellow Canadian citizen.”