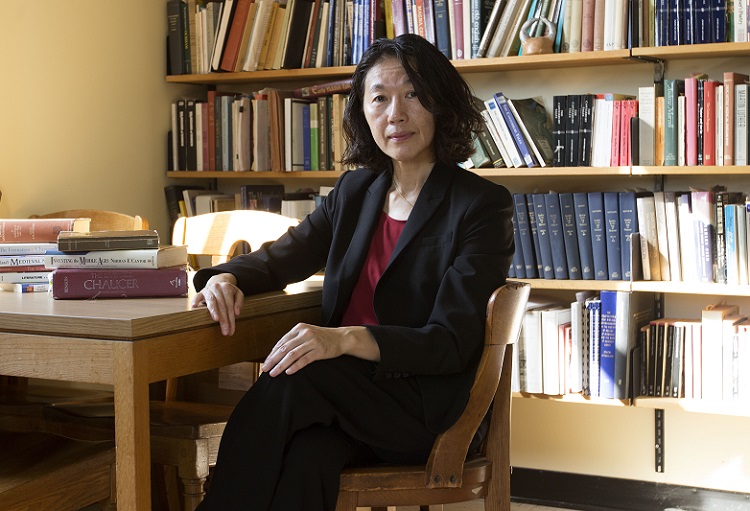 The study of a language reveals fascinating details about the people who speak it. The Dictionary of Old English (DOE) project, started in 1970 at the University of Toronto, aims to map all of the roughly 33,000 known words from the earliest form of the language (600-1150 CE)—transforming our understanding of the Anglo-Saxon world. The editors are ready to publish the Dictionary of Old English: A to I this August, and are already working on the next volume, covering LA through LE (Old English has no J or K).

Steadfast support from the Salamander Foundation has already helped the Dictionaryʼs editors release instalments several months ahead of schedule. Now a new gift of $1.5 million, to be disbursed over the next 10 years, will help make further progress. It is the most generous donation the project has received.

“This latest gift has greatly energized everyone involved with the DOE,” says Professor Haruko Momma, the Chief Editor of the Dictionary and U of Tʼs Angus Cameron Professor of Old English. “We are uncovering new words and expressions every day. Now we can make even more groundbreaking discoveries with the Foundation’s magnificent gift. We plan to invite young-career scholars, such as post-doctoral fellows, to help the senior editors draft more entries.”

Language provides a unique window into our past. “Studying Old English offers deeper insight into the history of law or the way the human body was understood 1,000 years ago,” says Momma, who holds an MA and a PhD in medieval studies from U of T. “It also lets us trace the evolution of beliefs and ideas about fate, heroism, humanity and cosmology.”

We are uncovering new words and expressions every day. Now we can make even more groundbreaking discoveries

Take, for example, the Old English word for salamander, wæternædre—literally, ‘water snake’. “In Latin, salamandra was mainly a mythical creature that can live in fire,” says Momma. “Of course, the Anglo-Saxons knew about the myth. But when they rendered this Latin word into their own tongue, they chose a word that reflected their lived experience, based on their observation of the animal in the natural world.” This is just one of many words that offer insight into the Anglo-Saxons’ understanding of their environment. And that’s why the Dictionary of Old English is not just an exercise in lexicography, but a study of the cultural evolution of a people.

The Salamander Foundation was one of two organizations that evolved from the Richard and Jean Ivey Fund, a charitable foundation administered for many years by the Iveyʼs daughter Lorraine Shuttleworth, who passed away in March 2018, at the age of 98. Lorraine was a passionate philanthropist in her hometown of London, Ontario, supporting health, culture and sustainability initiatives.

Lorraine’s daughter Nan Shuttleworth—who was president of the Salamander Foundation until it wound up in 2018—embodies her mother’s passion and generosity. Nan, who has been a keen supporter of the Dictionary for many years, received an Arbor Award in 2013 for her work helping secure grants for the project.

“Nan has greatly inspired our team, and we are profoundly grateful,” says Momma. “Thanks to Nan, we are one giant step closer to completing the DOE, and to realizing our ultimate goal of establishing a global institute for the study of Old English in Canada.”

Read about opportunities to sponsor a word and other ways to be part of Dictionary of Old English.

Read about opportunities to sponsor a word and other ways to be part of Dictionary of Old English.