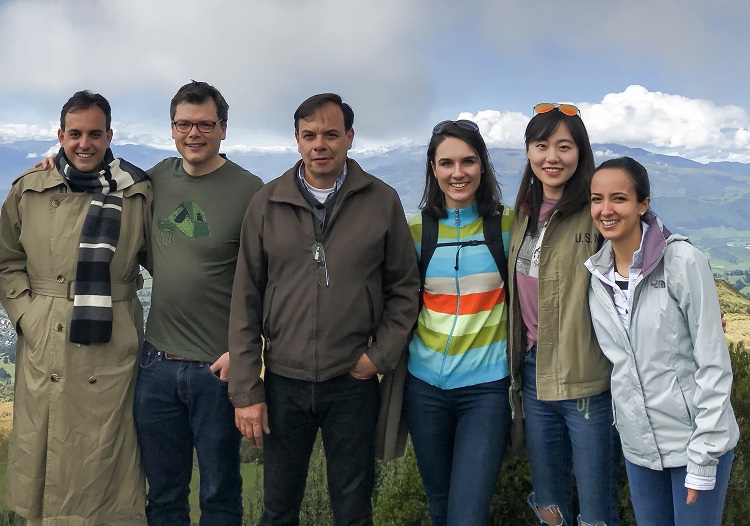 It’s not in the news any more, but that doesn’t mean people aren’t still dealing with the Zika virus. The 2015-2017 outbreak in South and Central America caused disabling microcephaly in thousands of infants, shattering lives forever. And many other mosquito-borne infectious diseases—dengue, chikungunya, yellow fever—are still active around the world. In the absence of cures, preventing transmission is vital.

That’s where two U of T students are making an enormous difference.

Yuxiu (Livia) Guo and Seray Çiçek, two master’s students in working in professor Keith Pardee’s lab in the Leslie Dan Faculty of Pharmacy, have built a portable device that can operate off a battery, test a blood sample for Zika or another virus in minutes, provide an easy-to-read result—and all this at a cost of just $1 per test. It could be a vital tool for any health-care system stretched beyond its limits.

Harnessing the properties of cells to create a user-friendly, on-the-spot lab

The students’ device, nicknamed Plum, uses a technology invented by Pardee. He created a method to bring molecular diagnostics, which are usually limited to clinical labs, out of the lab and to the point of care. It’s based on a special paper that changes colour in reaction to a viral genome. By simply adding a blood sample and incubating it, the presence of a virus can be detected in one to two hours, instead of the usual several days.

Enter Çiçek (BASc 2017) with her engineering expertise, and Guo (honours BSc 2017 NEW) with her pharmaceutical training and flair for programming. The toaster-oven-sized Plum serves as a portable lab that, operating off a battery, maintains a specific temperature and monitors for signs of a positive Zika test. The operator pricks a patient’s finger, then slots the sample into Plum. If the RNA sequence associated with Zika is present in the blood, the paper will change colour from yellow to purple.

No special medical or lab expertise is needed to operate the device or read the result. “Accessibility of health care: that’s definitely the biggest impact we are trying to make,” says Guo. The system bypasses health procedures that simply don’t work in remote locations—such as having a trained doctor available, keeping samples refrigerated during transport to a lab, or waiting several weeks for a result.

The students have allowed for tricky or borderline cases—anonymous data can be reviewed from Toronto over the internet if more expert analysis is needed. Plum is the size of a toaster oven, operates off a battery, and can test a blood sample for Zika less than two hours.

Best of all, the test papers can be customized to react to different pathogens, so in future Plum could be adapted to test for Ebola, HIV, or other diseases.

Early in 2018, Çiçek, Guo and Pardee travelled to Ecuador, where the students met Pardee’s collaborators (he has investigative partners in the U.S., Brazil, Colombia and Ecuador) and showed the Latin American team how to use Plum. These partners are now comparing Plum’s results to their standard lab tests, and will soon begin making trips into remote regions to test the device on the ground.

Changing lives together: donors are a key part of the collaborative process

“It’s all about collaboration,” says Çiçek. “We wouldn’t be able to do this just by ourselves.” Generous donations meant that the students received help with tuition and a stipend for their lab work. “We have pulled many all-nighters!” says Çiçek. “That means it’s really hard to be able to have money for your living expenses. Donor funding means we don’t have to worry about that and can focus on making devices like Plum.”

It’s all about collaboration. We wouldn’t be able to do this just by ourselves

The students’ passion for their work comes from knowing Plum could save lives and has the potential to prevent future misery. “There are so many mothers who have babies born with microcephaly and have take care of them throughout their whole life,” says Çiçek. “And the most unfortunate thing is that this happens in a very resource-poor area. People are desperate for a solution. It is their hope that in the future the Plum device will make it easy to know which patients are at risk, so preventive measures can be taken and outbreaks contained.”

And in a twist that is cooler than any science fiction plot, Pardee has shown that adding an engineered DNA sequence to the same technology can be used to manufacture an oral vaccine or antibiotic on the spot. This work continues, and will be Çiçek and Guo’s next challenge.

“In Ecuador, we heard stories you would never hear through Canadian or international media,” says Guo. “A patient dying of a vaccine-preventable disease, but no vaccine was available. Why invent drugs if we won’t deliver them to people in need? I know this is what I want to do with my life.”

“This will save lives,” says Çiçek. “Zika is spreading across borders. It’s something that needs attention from all of us.”

Help fund practical health-care projects today with a gift to the Leslie Dan Faculty of Pharmacy.

Help fund practical health-care projects today with a gift to the Leslie Dan Faculty of Pharmacy.