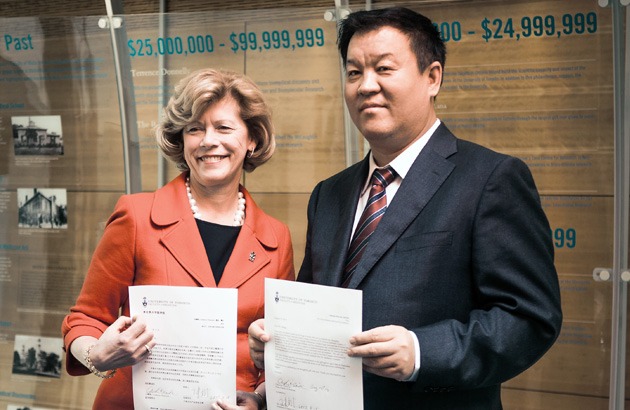 Zhang Bin, chairman of Chinese media network Millennium Golden Eagle International, is honouring Dr. Norman Bethune, a Faculty of Medicine graduate known for his humanitarian service in China, with a generous gift. Mr. Zhang’s donation of $800,000 to the Faculty of Medicine supports student awards and bursaries and the commission of a bronze sculpture of Dr. Bethune to be installed in May 2014.

As an international champion of art and culture, Mr. Zhang recognizes the need to cultivate skills and advanced learning. His support underscores the commitment to excellence in education outlined in the Faculty’s campaign, which is part of the University of Toronto Boundless campaign.

At a recent reception held for Mr. Zhang in the atrium of the Medical Science Building, Catharine Whiteside, Dean of the Faculty of Medicine and Vice-Provost, Relations with Health Care Institutions, called upon U of T students to emulate Dr. Bethune’s dedication to community service and innovation. “Through Mr. Zhang’s commitment, we are encouraging our students to exemplify Dr. Bethune’s characteristics in their educational pursuits and professional lives,” she said.

Bethune is a potent symbol of the University of Toronto’s historic ties with China. A graduate of our Faculty of Medicine, Bethune travelled to China in 1938 where he spent the better part of two years operating on war casualties and training Chinese doctors and paramedics. Dr. Bethune was recognized by the Canadian Medical Hall of Fame as a laureate in 1998 in the category of education.  He wrote extensively on the development of new surgical instruments helping to establish an essential reference for surgeons of his time.  He is most remembered as being the first to introduce a mobile blood bank to the battlefield.  Using this technique, he performed countless blood transfusions in the midst of heavy fighting while he served the Chinese Army during the Sino-Japanese war. Bethune died of sepsis in a battlefield during this period.