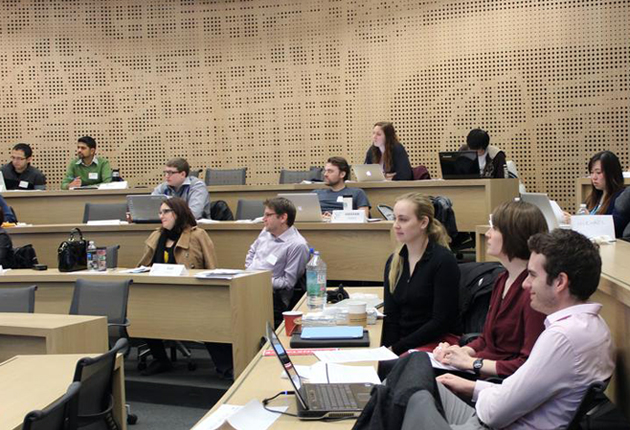 How do you turn bright tech ideas developed at the University of Toronto into successful startups? Backed by eight visionary partners, the Creative Destruction Lab at the Rotman School of Management aims to answer this question by combining the best aspects of mentorship, technical advice, access to venture capital and the competitive spirit. The Lab’s eight founding supporters are more than funders: they are engaged advisors guiding the development and application of exciting new technologies developed at U of T.

“The University of Toronto is a remarkably rich research environment that generates more innovative output than any other institution in the country,” says the lab’s director, Professor Ajay Agrawal, Peter Munk Professor of Entrepreneurship. “We’re experimenting with novel approaches for addressing market frictions on and off the campus with the goal of facilitating massively scalable companies predicated on U of T inventions and using the Lab environment to deliver world-class entrepreneurship education in the process.”

The term “creative destruction” was coined by Joseph Schumpeter, the celebrated economist of innovation, in 1942. It refers to the process by which new technologies contribute to the overthrow of the old economic order, often along with companies that fail to keep pace with technological edge.

The eight founding partners have donated a combined total of more than $2.1 million. But they did more than donate. They have become part of the program itself by helping U of T’s next generation of high tech startups enter the marketplace successfully.

“The magical thing about the gifts from the Lab’s founding partners is that each one came coupled with expertise, vision and enthusiasm that enabled us to deliver a first-of-its-kind program that would have been impossible with money alone,” Agrawal says.

The founding philanthropists are:

Among the first U of T-based ventures to participate are:

Meetings between the U of T participants and a Group of Seven fellows–including four of the Lab’s founding partners–are an essential feature of the Creative Destruction Lab. The members of the group, known as the G7, are experienced entrepreneurs who have created and built technology-based businesses. Every six weeks the participating U of T entrepreneurs meet the members of the G7 who set milestones for the next meeting. Each venture then reports on its progress and the G7 provides feedback, introductions to industry leaders and new milestones.

At each meeting the G7 identifies the lowest performing venture, which is dropped from the program, allowing the Lab to focus additional resources on those with the greatest chance of success. But everyone wins. All the participants gain valuable knowledge and experience, improving their future prospects, while the best ventures go on to receive the additional support they need for success in the near term.